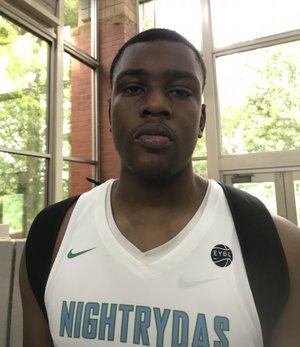 NORTH AUGUSTA, S.C. — It appears Arkansas will be getting an official visit from a four-star center in the near future.

Playing for Nightrydas Elite at the Nike EYBL Peach Jam, Reynolds said a trip to Fayetteville could happen soon.

“I want to visit soon, but I don’t know when,” Reynolds said. “After Peach Jam probably.”

ESPN rates Reynolds a four-star recruit, the No. 16 center in the nation and No. 6 prospect in Florida. He averaged 12.1 points, 5.8 rebounds and 2.3 blocks per game as a junior.

A key part of his interest in visiting Arkansas is in assistant coach Corey Williams.

“I like coach Williams,” Reynolds said. “He talks to me the most. He’s a cool dude. We’re kind of close.”

“He gets me, we have stuff in common,” he said. “The things I like he likes. We’re close. He’s taught me a lot.

“It’s a good school and it’s a high major. I want to see the campus and check out the educational opportunities.”

Reynolds said he is only interested in visiting Arkansas and Boston College as of now.