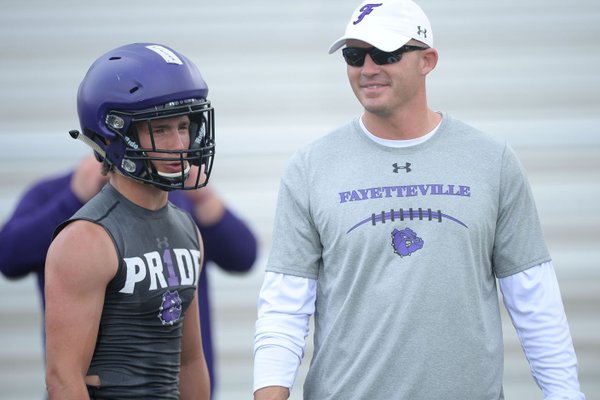 As a former Texas high school football star turned University of Arkansas quarterback, new Fayetteville football coach Casey Dick is in a unique position to know just how much the Lone Star State can help the Land of Opportunity's top college program.

During Arkansas' heyday, the talent in-state was almost always supplemented by a pipeline from Texas.

"We have great football here in Arkansas, but it's a different thing in Texas," said Dick after his team finished at the Southwest Elite 7on7 tournament at Shiloh Christian last Saturday. "It means everything to them. Nowhere is football as important as it is to the people of Texas.

"It is just what you do growing up in Texas, and that's why there are so many great teams and great players in Texas. There is so much support, and programs put so much money into it, and kids play from the time they can run. Arkansas got away from recruiting Texas, and I think that is part of why things started to turn the wrong way."

Indeed, after the previous staff all but turned a blind eye to recruiting in Texas, second-year Razorbacks' coach Chad Morris made it a priority to get back in that state to fortify the Arkansas roster.

There are eight Texas prospects among the 11 Arkansas has committed in its 2020 class while Morris and his staff landed six in the 2019 class and four in 2018 after arriving just days before the early signing period began.

Those 18 players/prospects are just nine less than the former staff brought in during the previous six recruiting cycles combined.

"I have no doubt that Arkansas getting back into recruiting Texas is going to help them turn things around," Dick said. "I have great confidence in these guys and believe they go about it the right way. I think they have a bright future because of that and the coaches that they are."

He chose Arkansas over Texas Tech, TCU, Houston and others after throwing for more than 2,000 yards as a senior at powerhouse Allen.

"It was a great decision," said Dick, whose younger brother Nathan followed him as quarterback at Allen and Arkansas. "One of the best I could have made."

After free agent tryouts with the New York Jets in 2009 and Miami Dolphins in 2010, Dick got into coaching as the quarterbacks coach and co-offensive coordinator at Byron Nelson High School in Trophy Club, Texas.

Dick and his wife Felicia wanted to get back to Arkansas, so he took a job as an eighth-grade coach at Rogers' Lakeside Junior High before moving on to Bentonville West for two years as the offensive coordinator and Van Buren as the head coach last season.

After leading the Pointers to the playoffs for the first time since 2011 in his only season there, Dick left the Pointers for Fayetteville to replace Billy Dawson, one of four different Purple Bulldogs head coaches since 2016.

"Hopefully, I can add some stability to it," Dick said. "It is just a great program from the top down, and (athletic director) Coach (Steve) Janski has done a great job as far as running the athletic program, and (Superintendent) Mr. (John) Colburn has a great vision into the culture of Fayetteville as someone who has been here for 40 years."

Fayetteville has won four state titles this decade with championships in 2011, 2012, 2015 and 2016 while losing in the quarterfinals the last two seasons.

"The expectations for this program speak for themselves," Dick said. "Our job is to hit this thing running with the same expectations and try to raise the bar to the next level. Our kids understand that and embrace that, so anytime you have that combination, it's a good thing."