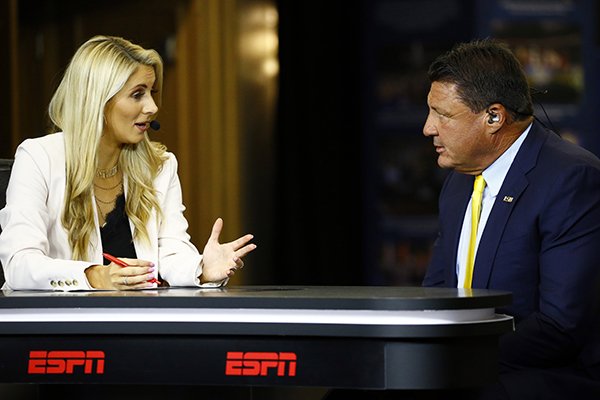 LSU at a glance

SEC TITLE SCENARIO The Tigers have plenty of experience and talent and added a highly-rated recruiting class, but they need placekicker Connor Culp to be clutch as the replacement for Cole Tracy, who hit 29 of 33 field goals last season. LSU figures to be in some close games against a loaded schedule and a dependable field goal kicker should be crucial. Culp hit 11 of 16 field goals in 2017 before Tracy arrived as a graduate transfer but also missed three extra-point attempts.

Last season when many predicted the Tigers were staring at a .500 finish, LSU won 10 games for the first time since 2013.

"I think Coach O has proven for sure the last two years that he's one of the best coaches in the country," LSU senior quarterback Joe Burrow said. "You don't just fall backwards into a 10-win season when nobody is thinking you're going to do that.

[Video not showing up above? Click here to watch » https://www.youtube.com/watch?v=YQDJ5RCMvF4c

"Coach O is a lot smarter than people think. He not only knows defensive football, but he knows offensive football as well. That's what makes Coach O such a good coach, is he's so well-rounded."

When the interim tag was removed from Orgeron's job at LSU, some critics might have questioned his ability to lead a top-10 program because of his 10-25 record at Ole Miss from 2005-07, his thick Cajun accent and defensive lineman's physique.

"But if you sit down with Coach O for more than 45 seconds, you can see that is not the case at all," Burrow said. "Coach O is one of the smarter people I've been around. Not only in football, but in life."

The natural progression for LSU going into this season is to win the SEC West, but that likely means beating Alabama -- something the Tigers haven't done since 2011 when they edged the Crimson Tide 9-6 in overtime in the teams' regular-season matchup.

Alabama stretched its winning streak to eight games over LSU -- including a 21-0 victory in the 2011 BCS National Championship Game -- with a 29-0 pounding at Tiger Stadium last season.

"It showed that we need to get a lot better if we want to compete for the whole thing like we do," Burrow said. "But we're not really focused on beating Alabama.

"I think if you do that, you kind of tie your hands together before the season. But we are focused on getting demonstratively better than we were last year."

Orgeron, a graduate assistant strength coach at Arkansas in 1986-87, said the Tigers were a few plays away from being 12-1 last season, when they lost 27-19 at Florida and 74-72 in seven overtimes at Texas A&M.

"We cannot make the mistakes we made against Florida," Orgeron said. "We had opportunities to win the game at Texas A&M. Those are the two things we need to look at.

"We did not play well against Alabama. Now we have to go on the road and play them again."

In addition to playing Alabama, Florida, Auburn and Texas A&M, the Tigers -- who traded Georgia for Vanderbilt in the SEC rotation -- have a road game at Texas.

"We have a tough schedule this year, but we have a good football team," Orgeron said. "We should be able to answer the bell."

Burrow is among 16 returning starters, eight on offense and eight on defense.

"We have a lot of talent coming back," said junior safety Grant Delpit, who had 74 tackles, 5 sacks and 5 interceptions last season. "More than we've had in the past."

Burrow said LSU's experience should make it dangerous as well.

"That bodes well for any football team," Burrow said. "If we do what we need to do, we can beat anybody in the country."

Orgeron said LSU's secondary -- led by Delpit and senior cornerback Kristian Fulton -- is the best he's been around in his coaching career.

LSU's 3-4 defense also will be bolstered by the return of sophomore linebacker K'Lavon Chaisson, an elite pass rusher who suffered a season-ending knee injury in last season's opening 39-17 victory over Miami.

Offensively, the Tigers are switching to a Spread attack with the addition of Joe Barry, a former New Orleans Saints assistant, as passing game coordinator.

"We have some very, very talented receivers," said Burrow, who passed for 2,894 yards and 16 touchdowns last season. "I think they're some of the best in the country.

Barry is working with offensive coordinator Steve Ensminger, who will continue to call the plays.

"Coach Joe has brought in a lot of exciting things to our offense and Coach E has done a great job of coming up with his own things as well," Burrow said. "We're kind of building this thing as an offense

"It's kind of a communal idea space."

Delpit said he's impressed by the Tigers offensively based on what he's seen in spring practice and summer workouts.

"I expect big things," Delpit said. "Joe said we're going to score a lot of points, and I trust in Joe. He's our quarterback and we trust him. We just need everybody to pitch in."

The defense figures to play more snaps with the offense playing at faster pace. That will mean some quick turnarounds if the offense can't make a first down to keep a series going.

"Going three-and-out in a hurry is tough, but on defense we've got to have the offense's back," Delpit said. "If we don't have it, who else will?"

Orgeron is going into his seventh season as a head coach, including a 6-2 record as Southern California's interim coach in 2013 after Lane Kiffin was fired.

"I'm much more comfortable being the head coach of LSU," Orgeron said. "I do believe we have our players in. I do believe I have a lot better staff today than I've ever had. I have guys that are experts at the position, guys that understand the expectations of myself and LSU.

"I believe we have a returning quarterback means a lot to us. We still have to get better at the line of scrimmages. I'm not saying get better players. We need to perform better.

"We need to coach them better. These guys need to play well in order for us to win the championship. I think that's where we need to make the biggest improvement."

Orgeron said last season was pivotal for the Tigers.

"It puts us in position to take the next step at LSU, for what LSU deserves."

Fourth in a series previewing the 2019 SEC football season.