Saban continues to be Elvis of the SEC 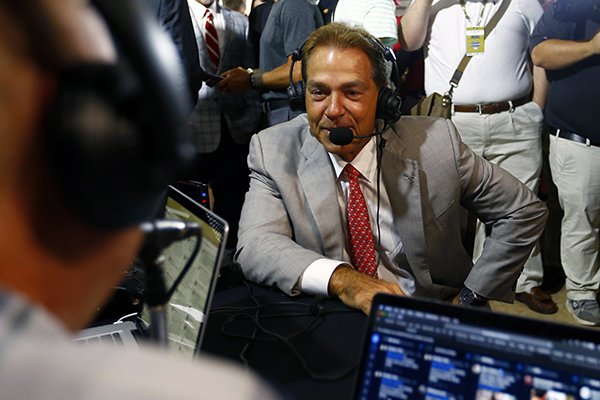 HOOVER, Ala. — When Nick Saban strode onto the podium the biggest crowd of media this week quit talking.

Complete quiet embraced the most disliked and most respected head coach in the SEC.

The SEC should consider changing its name to the Saban Economic Conference.

The man oozes money. He makes so much that no one knows for sure if it is $9 million or $10 million a year, every year.

He’s such a grinder that he has trouble keeping offensive coordinators — he is not shy about chewing on assistants’ behinds live on national television — and the last one quit and left town without telling him.

So he was asked if he’s difficult to work for.

He didn’t bristle, but the question took him back momentarily.

“Recruiting has become, you know, 24/7 because we’ve created a scenario where we have to recruit constantly because we’re recruiting guys in advance as we move up the recruiting calendar.”

Probably just about every head football coach from junior high through most of the colleges would trade places with him. Again, he makes so much money he can’t spend it all.

Yet, he created the monster, and he’s the one who keeps it fed.

If he has a CEO approach to coaching Alabama and it is true everyone, including players, assistants and maybe the president, has to make appointments to see him, so be it.

What he has done at Alabama — made it so successful that it is as disliked as Duke is in basketball in the world of perspiring arts — has come through his vision, his work and his desire.

The Crimson Tide are so above the majority of teams that he doesn’t spend time looking at the transfer portal, other than to see if he is losing a four- or five-star player.

His depth chart is so deep with talented players it would be a waste of time for him.

Both will be Heisman Trophy candidates, and at one time they were close friends and teammates.

It is a passage of summer at the SEC Football Media Days that the Tide will be picked to win the SEC West and the SEC championship.

Some will pick against him and regret it before the season is over.

Consider the Crimson Tide return just 12 starters and LSU, a team that won 10 games last season, returns 16, but Alabama will be voted the team to beat by the writers at this meeting.

Saban, somewhat out of character, always takes time to thank the media. This time he started off the podium, turned back and said:

“Thank you. And again I would like to thank everybody here for the self-gratification that you bring to a lot of players with your attention and the attention that you give them and how much you enhanced our game in terms of interest with fans. I think it’s really important to the success of the game long term. So, thank you very much.”

All of that is true, but media members will most likely be chastised for a question or story the next time they cover Saban.

When you are the King of the SEC hill you have latitude unlike any other.

And you draw the biggest crowds any time you show up. At least 30 percent of the media left when Saban did. They are the Crimson Tide, and they are the face of the SEC, and whether you like Saban, or not, he is the one most responsible for making the SEC mean a little more.