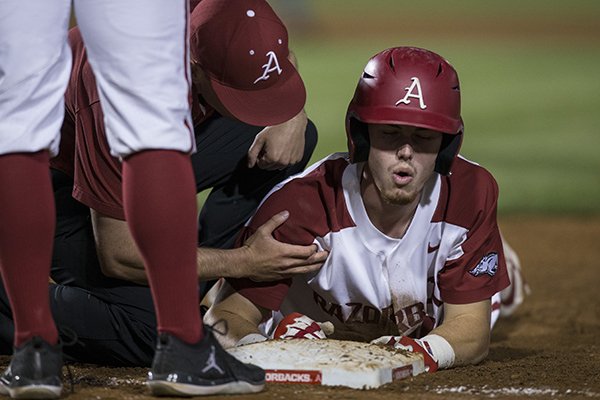 Arkansas designated hitter Matt Goodheart is examined by trainer Corey Wood during the Razorbacks' game against Tennessee on Friday, April 26, in Fayetteville.

Goodheart, who batted .345 from the left side as the team's designated hitter this year, dislocated his right shoulder April 26 against Tennessee while diving back to first base on a pickoff attempt. The injury caused him to miss three games.

Goodheart started the Razorbacks' final 20 games and played seven games this summer for the Orleans Firebirds of the Cape Cod League, where he batted .320 and had a .438 on-base percentage. He returned home to Arkansas in early July.

The recovery timeline and Goodheart's availability during the Razorbacks' fall practice season is unclear.