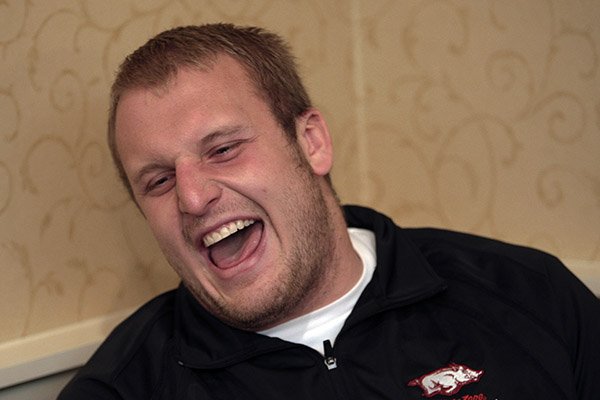 He was gregarious, to say the least.

If there was an ounce of unhappy on his 300-pound muscled body, it wasn’t to be found.

Mitch Petrus loved to laugh, and it came from his heart.

In the world of perspiring arts, he was a hero.

He was a kid from Carlisle who walked on for the University of Arkansas football team. He didn’t need a dorm room; he needed a cot in the workout room.

His strength, desire, determination and attitude helped him become a two-time All-SEC guard.

The term walk-on to him was irrelevant other than it meant opportunity.

Shock reverberated across the football world Friday when confirmation was made that Petrus, 32, had died Thursday night as the result of heatstroke.

His passing made the national ABC News.

It brought a profound sadness to those who were blessed to know him even a little.

David Bazzel brought him into the FM-103.7, The Buzz family, and he was outrageous, hilarious and a joy with which to work.

He moved on to TV, working with Wess Moore at Fox Channel 16. He appeared at high school football games as a reporter, sometimes complete with clown hair.

For Petrus, it was more than picking up a few bucks — he was a guy who hauled hay, drove a tow truck and worked at various other things. He liked to have fun.

And he loved sports, especially football.

Still looking like he could play, Petrus would enter a room and within seconds the energy level was flowing out the door.

If he ever met a stranger, it was because the stranger was too strange.

He sincerely liked everyone and would talk to anyone.

Petrus loved music and played guitar in a band named Vikings of the North Atlantic.

When his career as a Razorback ran out of time, Petrus went to the NFL scouting combine in 2010 considered a very late choice, but when he squeezed his big body on the small bench for bench presses, he ripped off 45 at 225 pounds.

That tied him for second most at the time.

He was drafted in the fifth round by the New York Giants, where he earned a Super Bowl ring protecting Eli Manning from the famed and favored New England Patriots.

When he finished his NFL career, he could have lived anywhere in the world, but he hurried home to Carlisle near his family and friends.

There was no job too big or too small for the man whose work ethic was developed as a child, and he kept it until the very end.

The last time our paths crossed was in a press box on a Razorbacks game day.

After a short visit, he said he was having more fun than one man deserved. He added the Hogs needed a win that day.

“You look like you could help,” he was told.

“If I was eligible, a herd of elephants couldn’t keep me off that field,” he sad.

It wasn’t bragging. It was just a fact.

On Thursday night, Petrus was rushed to the hospital. He had pushed himself too hard in the horrific heat wave, and he didn’t make it.

It was shocking news Friday, and all day social media was filled with kind comments and soft words for a man who lived life large.

Memories flowed, and all were positive.

Teammates from all phases of his life were stunned and hurt by the loss of a man they sincerely liked and truly trusted.

It wouldn’t be surprising if today he was looking down, wearing his No. 66 Razorback jersey, strumming his guitar and wishing everyone could know he’s happy.

Mitch Petrus was a one-of-a-kind man who left far too soon, but he did so with a legacy so positive that he will be missed by legions for years to come.