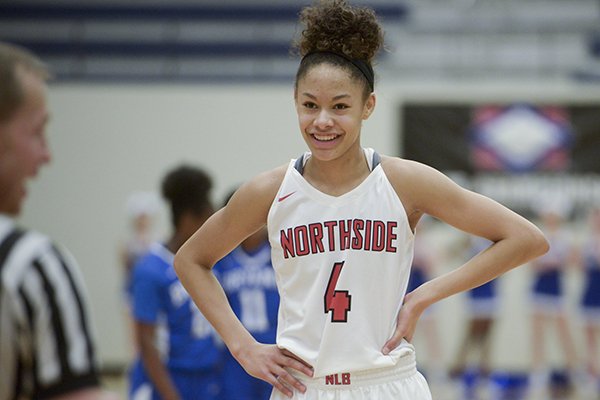 Neighbors extended the offer to Wolfenbarger after her freshman season in the spring of last year. Since then, her offer list has grown along with her height.

“I feel like he was the first one to see and believe in me as a player,” Wolfenbarger said. “I’ve grown a lot since he offered me. He had enough faith in me to want to build a relationship, and we want you to know we offered you and we really love your game.

“That relationship is definitely strong because I’m a very loyal type person, and for them to believe in me it really holds a special place in my heart.”

Wolfenbarger, 6-2, led her team to a 28-1 record and the Class 6A state title as a sophomore after scoring 23 points and being named the championship game MVP. She averaged 22.5 points, 3.3 rebounds, 2.5 assists and 1.3 steals a game for the season.

Since the offer from the Razorbacks, Connecticut, Florida State, Oklahoma, Tennessee, Texas A&M, Arizona State, Ole Miss, Louisville and others have offered. Wolfenbarger said she averages talking to three or four coaches a day.

“Some of them new, some of them I’ve already established, and they’re just kind of trying to catch up and still feel me out to see if I’m still interested,” she said.

Wolfenbarger, who plays for the 17-under Arkansas Banshees in spring and summer, trusts her instincts when sorting through schools.

“Just like when you play, your instincts take over in the game,” Wolfenbarger said. “You can tell definitely with coaches with conversations on the phone. You can tell if they’re smooth and easy flowing, or if they’re like kind of forced.

“I think my biggest thing I look for and listen for is energy. I love when coaches talk to me and they seem enthusiastic and they love their job and are very passionate.”

Neighbors fits what Wolfenbarger is looking for in a coach.

“I like his energy. I like his style,” she said. “He’s always trying to learn, and he’s always passionate. I’ve been down there a couple of times for camps, and he always has an energy about him. Like he genuinely cares about you and wants you to get better, and I really love that because I want to be pushed.”

Culture and tradition headline her wish list for a school.

“Culture is probably my biggest thing,” Wolfenbarger said. “Even if they have the tradition and they haven’t had the best couple of years, I still try to understand. Like I could be a part that brings them back.”

Being comfortable around the people at her school of choice will be a major factor.

“They’re the ones I’m going to be with the next four years,” she said. “They’re going to have to be my family. My parents are going to move with me whenever I go, but knowing I’m not going to be around them 24/7, that’s a little hard because we’re so close.”

ESPN rates her as a four-star recruit, No. 6 point guard and No. 23 overall prospect for the 2021 class.

“I want to play professionally after college,” Wolfenbarger said. “I want to keep expanding my game and growing.”

She’ll lean on her family when narrowing her choices.

“I’m sure by the end of my junior year, beginning of my senior year, I’ll probably have my top 10 or narrowing it down slowly as I go,” she said.

Wolfenbarger, who has a 4.0 grade-point average, wants to major in sociology.

“I just love people, and I’ve always wanted to help them, but the mind intrigues me,” she said. “Because I know how I think, and I want to know what makes other people think.”