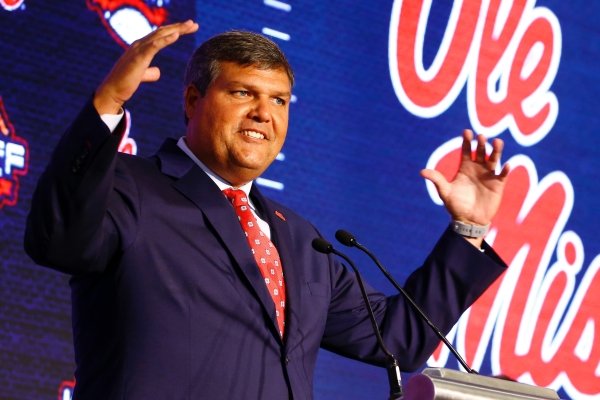 HOOVER, Ala. -- Fresh off a two-year NCAA mandated bowl ban, the Ole Miss Rebels will enter the fall bursting with enthusiasm based on postseason possibilities.

Cut to a needle scratching across a record.

Bowl appearance scenario A smooth mesh to the Rich Rodriguez run-based Spread is a must if the Rebels are to make noise in the SEC West. The punching bag defense is making a move to the 3-4, which is not an easy transition in one season, but the unit is filled with veterans who should be in position for improvement.

The Rebels have a boatload of key offensive players to replace. And they're still looking for help on what was statistically the SEC's worst defense last year, which allowed 483.4 yards per game to rank No. 121 in the nation.

Third-year Coach Matt Luke looked on the bright side of the equation during his time in the main ballroom at SEC media days last week, emphasizing the new talent on hand.

"There's a lot of excitement in our building right now for a lot of different reasons," Luke said. "We've had a very productive and a very busy offseason.

Ole Miss remains on probation through Nov. 30, 2020, for its latest infractions case, in which the school was accused of 15 Level I violations, chastised for lack of institutional control and for fostering "an unconstrained culture of booster involvement in football recruiting."

Luke took over in July 2017 after the sudden resignation of Hugh Freeze when a phone-records search revealed calls to an escort service.

Luke has guided the Rebels to records of 6-6 and 5-7 in the past two years, and he is now charged with sparking a rebuild in the challenging SEC West. Led by a cornerstone recruiting class in 2013, the Rebels played in the Peach Bowl and the Sugar Bowl while winning nine and 10 games in 2014 and 2015, respectively.

Then came the well-publicized NCAA infractions issues that finally have abated.

"To have that opportunity to walk into a living room and not have a cloud hanging over your head, I think you're seeing an immediate impact on the recruiting trail because of that," Luke said.

Luke surrounded himself with former head coaches by hiring two of the last five Pac-12 coaches of the year as his coordinators, plus former Louisiana Tech head coach Jack Bicknell as offensive line coach.

Mike MacIntyre, the 2016 Pac-12 coach of the year at Colorado, is implementing a new base 3-4 look as he takes over the underwhelming defense. Rich Rodriguez, who won the Pac-12 honor at Arizona in 2014, is bringing his run-based Spread option attack to the offense.

"The coordinators he's brought in and himself, they're all great motivators," senior guard Alex Givens said. "We can play for a bowl game this year, so that just brings a huge spark to our team. We're back to 85 scholarships, so there's a great vibe around the locker room."

The Rebels will rebuild offensively around freshman quarterback Matt Corral, a Californian who chose Ole Miss over Florida. Corral is not green, as he got in four games as a backup to Jordan Ta'amu -- the SEC's total offense leader last year -- and passed for 239 yards.

Rodriguez -- a head coach at West Virginia, Michigan and Arizona -- takes over an offense that led the SEC and ranked fifth nationally with 346.4 passing yards per game, and his system suits Corral, a 6-1, 207-pounder.

"It's the same offense from my senior year when I was at Long Beach Poly," Corral said. "It was a lot of progressional reads. A prolific offense my senior year. The type of offense Rich Rod runs, it's very, very similar."

"He stepped up vocally last year," Givens said. "He led by his play and he was a very aggressive, a very feisty guy, which I liked seeing. He's been leading with his voice a lot more this year in spring ball, so it was good to see that."

Ole Miss lost a ton of experience at receiver with the departures of A.J. Brown and D.K. Metcalf, but returns Elijah Moore, who had 36 catches for 398 last year. Returning starters Ben Brown and Givens are the top linemen.

The front seven on defense is loaded with veterans such as linemen Josiah Coatney and Benito Jones, and linebackers MoMo Sanogo and Qaadir Sheppard who are tired of hearing about what a hot mess their unit has been.

MacIntyre, a former defensive back at Vanderbilt and Georgia Tech, seemingly had Colorado ready to roll after winning the Pac-12 South with a 10-4 record in 2016, but his next two teams faltered to losing records and he was fired in the midst of a six-game losing streak last fall.

Sanogo called MacIntyre a "defensive genius" and described the team as hungry after not playing in a bowl for the past three years.

"I want to go to one. I want to experience that. I want to be one of those top 25 teams in the country. That's what we want. We know what you want doesn't get you anywhere. It's what you do."