Hogs pledge looking to recruit others at cookout 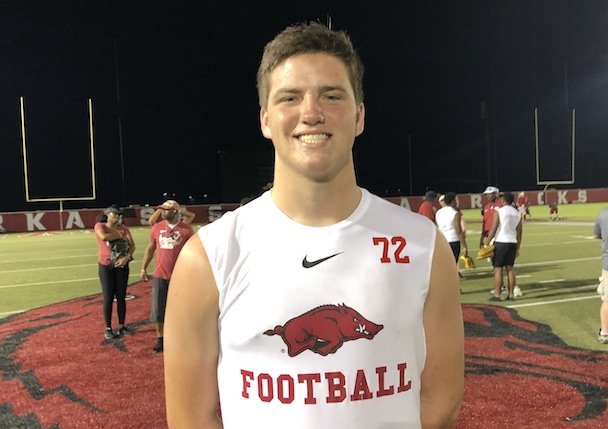 He’s been communicating with offensive line target Brady Ward, 6-7, 310 pounds, of Mobile (Ala.) St. Paul's Episcopal, and plans to do the same at the cookout.

“I’ve been talking to Brady Ward for a while trying to get him to commit,” Frazier said.

Frazier, who is one of eight Arkansas commitments from Texas, is rated a 4-star prospect by national recruiting analyst Tom Lemming. He's wanting to develop relationships during the visit.

“Looking forward to meeting some of the offensive commits especially,” he said.

He recorded 37 receptions for 537 yards and five touchdowns as a junior and 22 catches for 423 yards and four scores as a sophomore. Frazier will be making his sixth visit to Fayetteville when he arrives around noon on Friday. He leaves Saturday morning.

Since his commitment to Arkansas, Frazier said other schools have backed off.

“I told everyone I was 100 percent down for Arkansas,” Frazier said. “I trust what’s going on and it’s the place for me. No decommitting.”