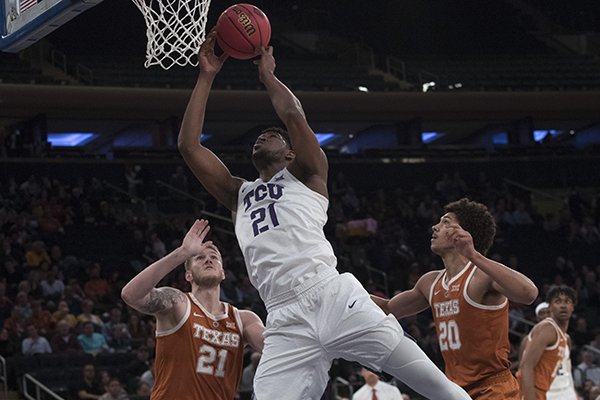 The Razorbacks will host TCU in the challenge, according to a release from the Southeastern Conference on Thursday. CBS reporter Jon Rothstein first reported the game on Tuesday.

Arkansas and TCU have not played since the Razorbacks' final season in the Southwest Conference in 1991. Arkansas leads the all-time series against the Horned Frogs by a decisive 104-38 margin.

The Razorbacks have played all seven other former SWC opponents at least once since they moved to the SEC prior to the 1991-92 season.

Since moving to the Southeastern Conference in 1991, Arkansas has played 35 games against teams that were in the Southwest Conference at the time of the Razorbacks' departure. Here is a look at Arkansas' record in those games:

It is the sixth consecutive season Arkansas will participate in the inter-conference challenge. The Razorbacks are 2-3 in those games the last five seasons, most recently losing to eventual national runner-up Texas Tech 67-64 in Lubbock, Texas, last season.

Here is a look at how Arkansas has fared in the challenge:

TCU, coached by Jamie Dixon, is the sixth known nonconference opponent for the upcoming season. The Razorbacks are scheduled to host Rice on Nov. 5, host North Texas on Nov. 12 and play at Georgia Tech on Nov. 25, and are under contract to return games at Indiana and Western Kentucky.