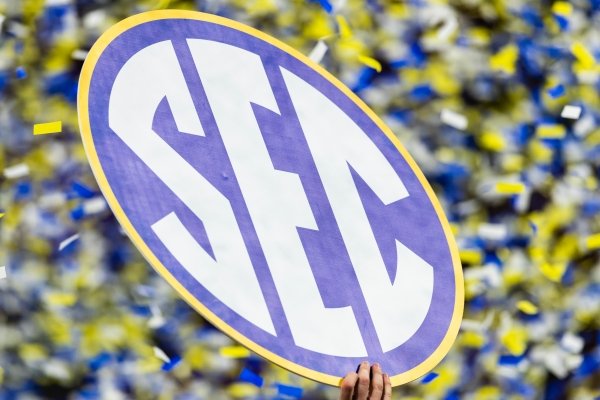 SEC sign held up by a player after the Southeastern Conference Championship NCAA college football game against the Alabama Crimson Tide and the Georgia Bulldogs on Saturday, Dec. 1, 2018 in Atlanta. (Ric Tapia via AP)

CBS released another SEC Game of the Week on Tuesday, with Notre Dame at Georgia the second game on Saturday, Sept. 21.

CBS airs 15 second games, including four doubleheaders, and Tuesday’s announcement brings the total to four games that have been chosen. All game times are 2:30 p.m. Central except for Nov. 16 when the first game is 11 a.m., while Missouri at Arkansas is set for 1:30 p.m. on Nov. 29.

Already announced is, of course, that Alabama has the first CBS broadcast of the season when the Crimson Tide go to South Carolina on Sept. 14. On Nov. 2 it will be Georgia vs. Florida, and Missouri at Arkansas will be played the Friday after Thanksgiving.

Anything can happen, and this season may not be as predictable as one thinks, but here’s a guess at what other games will be broadcast on CBS.

Sept. 21: The first game of the doubleheader could be Auburn at Texas A&M. Gus Malzahn has taken over the offensive play calling and promised the Tigers will be more productive (couldn’t slide far, they ranked 13th in the SEC last season).

Sept. 28: Should be Texas A&M vs. Arkansas in Arlington, Texas, partly because the network doesn’t want to have Auburn too much. The Hogs should be 3-1 and maybe even 4-0 if they could steal one in Oxford, Miss. The Aggies will be 3-1 or 2-2. Can’t see them winning at Clemson.

Oct. 5 : With six teams having an open date this one looks to be either Auburn at Florida or Georgia at Tennessee, and maybe the only chance to air a Vols game. There is some optimism surrounding the Vols with 16 starters back, but it is the Vols.

Oct. 12: If the Gators were bypassed the previous week they seem to be a natural when they travel to LSU, and getting an afternoon game would be a plus. No one likes to be play in the shadows of Death Valley. There’s a very good chance the Tigers will still be undefeated, and could be going into the Nov. 9 game at Alabama.

Oct. 19: Tennessee at Alabama will get strong consideration since the Tide won’t be on CBS since the season opener. The Crimson Tide are always a good deal for ratings and will be undefeated. Tennessee likely to be 4-2, maybe 3-3.

Oct. 26: This one would seem to have Auburn at LSU written all over it. As predicted, the home Tigers will still be undefeated and the visiting Tigers are trying to put up big yards and scores.

Nov. 2: Georgia vs. Florida has already been set and most likely will decide the winner of the SEC East.

Nov. 9: LSU at Alabama will most likely be the featured game on ESPN so this one should go to Missouri at Georgia, provided these Tigers take care of business. Their schedule screams cream puff and undefeated at this point.

Nov. 16: LSU at Ole Miss in the Magnolia Bowl. Only fans of those schools know how fierce this rivalry has been for decades. The afternoon game should feature Georgia at Auburn. This one is a better than average rivalry too.

Nov. 23: Texas A&M at Georgia might be a lot of Bulldogs for CBS in consecutive weeks, but it likely will be a huge game, too.

Nov. 30: ESPN will do all it can to get the Alabama at Auburn game, but last year’s Texas A&M-LSU game was a thriller and one that the Tigers should be extra fired up about.

Those are just a few guesses for fun. As the season progresses records will dictate a lot about who plays in prime time and who doesn’t.

Again, though, every game will be televised somewhere, somehow and someway because SEC football, according to the SEC office, just means more.