Wildcats try not to step back 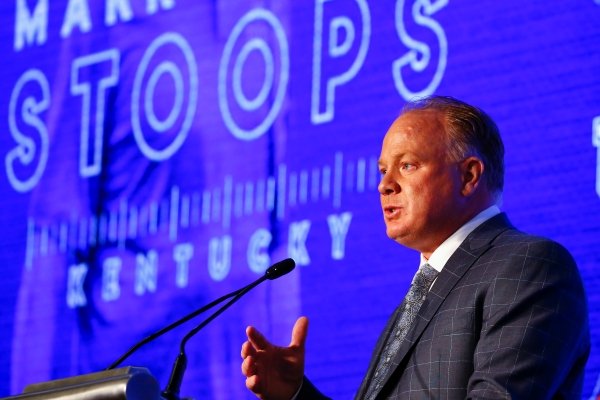 Ninth in a series previewing the 2019 SEC football season.

HOOVER, Ala. -- Kentucky's slow-motion six-year build under Coach Mark Stoops led to a 10-3 record last season, the school's first season with more than nine victories since 1977.

Media members appear to view it as a fluke.

Bowl scenario The Wildcats appear to have lost too much anchor talent to contend with Georgia and Florida atop the SEC. If quarterback Terry Wilson provides better ball security and maturity, receiver Lynn Bowden gets plenty of productive touches and the defensive plan falls into place for defensive coordinator Brad White, the Wildcats should easily snag a bowl bid.

Either that or the members of the press at SEC media days, who picked the Wildcats to finish sixth in the SEC East, believe the loss of impact players like rush linebacker Josh Allen and tailback Benny Snell, plus 12 other starters leaves the Wildcats lacking.

Stoops made it a point to stress the rarity of last year's record. When a reporter noted that it had been 40 years (actually 41) since Kentucky had won 10 games, and whether that was the new benchmark for the Wildcats, Stoops cut in.

In the 41-year span between 10-victory seasons, the Wildcats had 26 losing seasons and three seasons of eight-plus victories. History has a way of weighing down the hype.

"Yeah, obviously there's still a lot of naysayers and doubters for us, saying we're not going to be a contender for this year and be up to par to where we were last year," senior linebacker Kash Daniel said. "Those people, they didn't see what we had in the afterburner behind Josh and behind Benny."

"Losing the guys we lost, they were great players, great guys with great personalities," Bowden said. "People tend to overlook the players that we have. ... We may be young, but there's no excuse for us to take a step back. The only way for us to go is forward and it's going to be a great season."

Reflecting on 2018, the Wildcats turned in the most memorable football season in Bluegrass country since early in President Jimmy Carter's term, including the first New Year's Day bowl victory since 1951.

Kentucky beat Florida for the first time since 1986, beat three ranked opponents, matching its total of wins in that category from 2010-17, and finished No. 12 in the final Associated Press top 25 poll for the Wildcats' highest final ranking since 1977.

Stoops said he and the staff were proud of the accomplishments of last season but the team wants more.

"The nice thing is also our players saw what it takes," he said. "They saw the sacrifices that those players did, that all of them did. They were part of it ... so they have a good example of the leadership that it takes, of the sacrifice that it takes. ... That's the culture that we're trying to continue."

The Wildcats can at least start with a game-breaking talent on offense like Bowden, the third-team preseason All-SEC all-purpose specialist, and a high-potential quarterback like Terry Wilson.

Bowden's 67 receptions were the most by a Kentucky sophomore and the most by a Wildcat since Randall Cobb's 84 catches in 2010. He's a danger on special teams and he amassed 745 receiving yards and five touchdowns last season.

Wilson endeared himself to Wildcats' fans by immediately contacting Stoops after the death of beloved ex-quarterback Jared Lorenzen to ask if he could don Lorenzen's No. 22 jersey for the season opener against Toledo.

"When you really have time to go back and break down everything, there were a lot of plays we left on the field just by the basic fundamentals," Stoops said. "And those areas will help him alone, just fundamentally getting his proper alignments, fundamentally looking at the proper reads.

"And then the system, just understanding the system and making sure we as coaches are putting him in a position to be successful, what he's comfortable at. And then also getting better around him, putting pressure and getting some explosive wide receivers and guys that can make plays for him."

Should Wilson slip, the Wildcats have a backup with solid experience as former Troy starter Sawyer Smith came in as a graduate transfer with 2018 backup Gunnar Hoak departed as a transfer to Ohio State.

Smith completed 62.9 percent of his passes while throwing for 1,669 yards, with 14 touchdowns and 6 interceptions in 13 games, including starts in the final seven. Smith has two years of eligibility remaining.

The defense lost a load of veteran talent plus coordinator Matt House, who is now linebackers coach with the Kansas City Chiefs.

Brad White, last year's outside linebackers coach for the Wildcats, took over as coordinator and inherits all-new starters in the secondary but four returners up front in nose guard Quinton Bohanna, end Calvin Taylor, and the linebackers Jamar Watson and Cash, a 2018 defensive captain.

Cash said White, a former NFL assistant with the Indianapolis Colts, believes the Wildcats can spread around the sack damage after Allen, the national defensive player of the year, racked up 17 sacks and 30.5 "havoc" plays.

"In general, you can't replace [Allen]. Josh is Josh," Cash said. "The guy's built like Superman for crying out loud. What he did on the football field was second to none."

Cash said the Colts were just as good a sack team in 2015, the year after losing NFL sack leader Robert Mathis to injury, as they were in 2014 by spreading around the attackers.

"They twisted things around to where offenses were not focusing on just one player ... and the Colts saw an up-spark in team total sacks," Cash said. "If we can do that and still be able to play without a player like Josh and twist our defense around to free up everybody on our defense it'll be a special fun time for our defense and I'm looking forward to that."

So would Kentucky fans, who would rather not wait another 41 years for the team's next 10-win season.