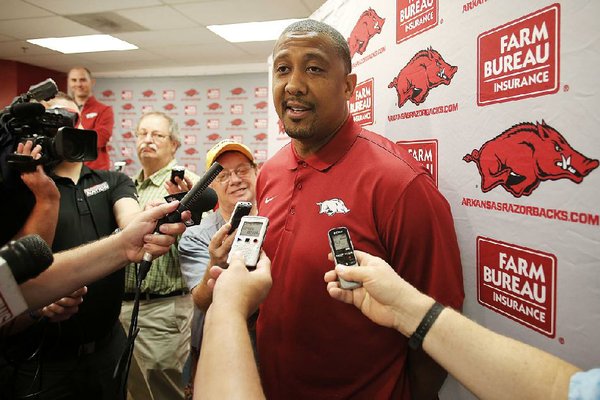 Scotty Thurman is shown in this file photo.

Former University of Arkansas star player and assistant coach Scotty Thurman is expected to be introduced Friday as the replacement for legendary Coach Al Flanigan at Little Rock Parkview, according to sources.

Thurman, 44, is best known for hitting a key three-point shot with less than a minute remaining in the Razorbacks’ 76-72 victory over Duke in the 1994 NCAA Championship game. He spent the past three seasons as an assistant coach on the Arkansas staff for Mike Anderson but was not retained by new Coach Eric Musselman.

Flanigan has stepped down after an illustrious career with the Patriots that included six state championship victories.

Thurman has roots in Little Rock, having earned a bachelor’s degree from Philander Smith College (2003) and a Masters from Arkansas-Little Rock (2012). The native of Ruston, La., returned to Arkansas in 2010-11 as director of student-athlete development and went on to join the Razorback Sports Network as the color analyst alongside Chuck Barrett before joining Anderson’s staff.

Thurman and his wife, Regina, have two children, Scotty Jr., a former walk-on receiver at Arkansas, and Romani.