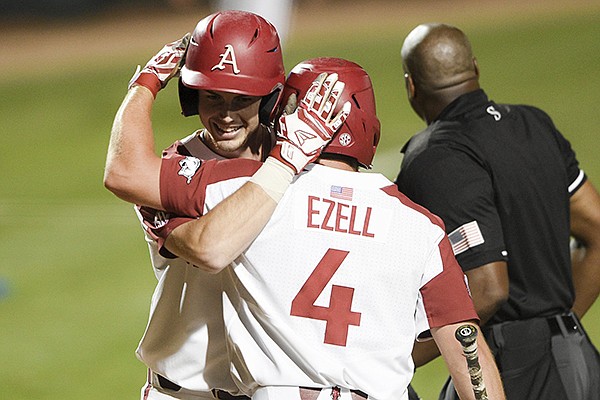 Arkansas designated hitter Matt Goodheart (10) hugs Trevor Ezell (4) after a score during an NCAA regional game against TCU on Sunday, June 2, 2019, in Fayetteville.

FAYETTEVILLE — A lot of comparisons were drawn between Matt Goodheart and Trevor Ezell this year when the native Arkansans transferred to their home state to help lead the Razorbacks to the College World Series.

Goodheart underwent surgery last week to repair an injury that stemmed from a shoulder dislocation he suffered during an April 26 game against Tennessee. The injury caused him to miss three games, but he returned to the Razorbacks’ lineup in early May and started the final 20 games of the season as designated hitter.

Ezell’s surgery caused him to be limited last fall and to switch positions from second base to first base when he had not re-established full range of motion throwing a baseball.

Van Horn said Goodheart also will be limited in what he can do during the Razorbacks’ fall practice season that begins in six weeks. Once he is cleared to begin baseball activities, Goodheart will be limited to drills like swinging off a tee and throwing soft toss.

“We hope he’s ready to swing the bat by the first game,” Van Horn said.

Goodheart’s .345 batting average as a sophomore was best among Arkansas’ everyday position players in 2019. Van Horn had hoped to try him at some defensive positions this fall.

“We were really going to make a push for him defensively, as far as development there and working him out whether it be at first base or in the outfield,” Van Horn said. “That’s been pushed back a little bit.”

Arkansas junior infielder Casey Martin did not make the USA Collegiate National Team after trying out for the team last month in North Carolina.

Instead of playing in the Cape Cod League, Martin opted to not to play summer baseball after the Team USA tryouts. Van Horn said the time off has allowed Martin to rest an injured shoulder that he played with for the back half of the 2019 season.

“We had an MRI and it was fine — just some inflammation,” Van Horn said. “He needed to rest that thing.”

As a sophomore, Martin’s batting average dropped 59 points from his freshman season to .286, and he committed a Southeastern Conference-leading 23 errors in his first season playing shortstop.

Van Horn said he would have liked to have seen Martin make the Team USA roster along with his Arkansas teammates Heston Kjerstad and Casey Opitz, but said Martin was “on the outside looking in” going into his tryouts, which were as an outfielder.

“He had to have really good workouts,” Van Horn said. “I think they went good but not great. They just didn’t know where they were going to play him.”

Gregory entered Thursday leading the Northwoods League with a .516 on-base percentage. After starting his summer season early because he redshirted, Gregory is batting .305 with 27 RBI, and has drawn 55 walks in 46 games for the Bismarck (N.D.) Larks.

Boulware, who redshirted this year after transferring from TCU, is batting .260 with 7 RBI and 6 extra-base hits in 19 games since a mid-summer switch to the Matsu (Alaska) Miners. Boulware began his summer playing in the Cape Cod League, but transferred to a different league to get more playing time.

Arkansas pitcher Connor Noland will be eligible as a sophomore for the 2020 MLB Draft because of a change to the draft’s start date, June 8.

According to Baseball America, any college player who turns 21 years old before July 25, 2020, will be eligible for next year’s draft. Noland’s 21st birthday will be July 20, 2020.

Most college players are not eligible for the draft until after their junior or redshirt sophomore seasons.

Noland started 19 games and had a 4.02 ERA this year. Last month he announced he will focus solely on baseball after playing football and baseball as a college freshman.

Arkansas has added three players from other Division I programs this offseason, but only one is guaranteed to be eligible to play in 2020.

Cole Austin, an infielder who most recently played at Arizona State, transferred to Arkansas as a graduate and is eligible immediately. Austin began his career at West Virginia and was a primary starter at third base before transferring to Arizona State following the 2017 season. He redshirted one year with the Sun Devils, then played in 10 games this year following a back injury.

“There were a lot of teams going after him,” Van Horn said. “We feel like he’s 100 percent healthy. He’s almost 6-2, 190, can play first, third, outfield, second. We feel like he’s a guy that will give us a little bit of maturity and hopefully some depth offensively that we can move around.”

Second baseman Cullen Smith, who transferred from East Tennessee State, is not expected to appeal for immediate eligibility. He would be a redshirt senior in 2021.

Three players who redshirted as freshmen in 2019 transferred out of the program this summer.

Catcher Andrew Stanley has transferred to Southern Miss, infielder Caleb Denny is headed to Oral Roberts and left-handed pitcher Steven Sanchez is looking for a destination.

Caleb Bolden, a right-handed pitcher who missed the 2019 season after undergoing Tommy John surgery in December, is doing well in his rehab, Van Horn said.

“He is bigger and stronger than he’s ever been, and he’s feeling healthy,” Van Horn said. “Time will tell. We’re hoping he can get on the mound for us in late fall, but we’ll see.”

As a freshman in 2018, Bolden had a 4.40 ERA in 28 2/3 innings. Van Horn indicated last month that Bolden could be looked at as a starting pitcher when he returns.

One that got away

When Van Horn met with media members on June 24, he said junior college outfielder signee Chet Allison had turned down an offer from the Los Angeles Dodgers.

But on July 12, the day of the signing deadline for drafted players, Allison signed with the Dodgers for $222,500 — well above the normal value for players at that position in the draft.

“They came back in about 48 hours out from signing day and offered him” a signing bonus plus a couple of years of college tuition, Van Horn said.

Allison, who batted .446 with 12 home runs as a sophomore at Fresno (Calif.) City College this year, was expected to be part of a crowded Arkansas outfield this fall that included returning starters Heston Kjerstad and Christian Franklin, as well as Curtis Washington and Brayden Webb, a junior college transfer from Grayson College in Texas who can also play second base and other spots in the infield.

“If we were going to lose somebody, it needed to be an outfielder,” Van Horn said. “I’m disappointed we didn’t get him. You always wonder as a coach how those junior college kids are going to come in and swing the bat. Athletically, it would be hard to beat what he would have brought to the table because he was big, strong, and he could run and he could really throw.”

Van Horn said he would like to play one exhibition game at home and one on the road. A number of factors play into scheduling exhibition opponents, Van Horn said, including distance and on-campus football games.

“Ideally we would like to play on a Friday and have a football game on a Saturday, but it’s a matter of getting someone over here and not missing school,” Van Horn said.