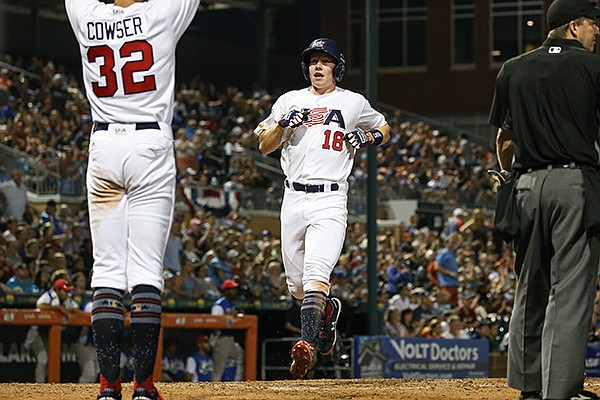 Heston Kjerstad (18) comes home to score during a game against Cuba in July 2019 in Durham, N.C.

Kjerstad, a rising junior for the Razorbacks, was a standout during 14 games playing for the USA Collegiate National Team, including four games in Taiwan and five games in Japan. Kjerstad also played five games and some scrimmages at or near the USA Baseball training facility in Cary, N.C., including a game on July 4 in Durham that he said was among his favorite memories of the experience.

Kjerstad finished international play batting .395, slugging .651 and with an on-base percentage of .426. He started 12 games in the outfield or as a designated hitter, and entered two other games as a pinch hitter.

“It was just a great experience the past month to be able to go out there and compete and play on a team with the best players in college baseball,” Kjerstad said.

On the play, Kjerstad hit the ball off the left-field wall. By the time the center fielder ran it down and began a relay to the infield, Kjerstad was rounding third base. He scored standing up.

Kjerstad had 6 extra-base hits — 3 doubles, 1 triple and 2 home runs — during his time with Team USA.

“He worked on his game as far as going the other way, hit a lot of balls to the opposite field and a lot of balls up the middle,” Arkansas coach Dave Van Horn said. “He didn’t try to hit a lot of home runs. It’s just impressive that he went out there, and on a big stage did a really nice job offensively. He made a lot of contact, didn’t strike out much and took a few walks, and obviously hit for a good average.”

Van Horn said he felt Kjerstad took a step forward in his development by showing he can hit with a wood bat, but also by handling other factors associated with playing summer baseball.

“I think anytime the guys go out to summer ball and put on a different uniform and have different teammates, and they have success, they definitely take a step in their baseball careers and development,” Van Horn said. “It’s not easy. You don’t have much time to get to know the players around you - you know of them and where they went to college, but you don’t know them personally like you know the guys over years of playing with them.”

The only player Kjerstad knew well on the Team USA roster was Razorbacks catcher Casey Opitz.

“That was kind of cool to have a teammate, because we’ve been around each other for two years,” Kjerstad said. “It’ll be cool to go back to Arkansas with him, to have someone to talk about it with. To have that experience with someone you really know is fun.”

The Team USA experience brought to end a grueling six-month stretch for Kjerstad that didn’t include many days without baseball. He started 65 of 66 games as a sophomore for the Razorbacks — his only missed game due to a suspension that followed an ejection — and was in North Carolina for the training camp the week after the College World Series ended last month.

“I think it grew me as a teammate and a leader,” Kjerstad said. “Getting that experience and being coached by some different coaches, and maturing as a player and a person was good for me.”