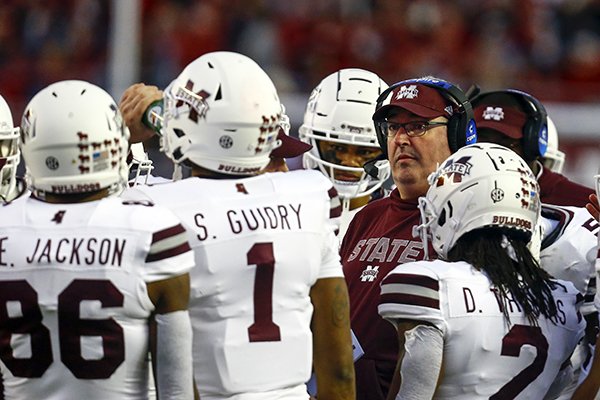 Mississippi State head coach Joe Moorhead talks with players in a timeout during the second half of an NCAA college football game against Alabama, Saturday, Nov. 10, 2018, in Tuscaloosa, Ala. (AP Photo/Butch Dill)

Eleventh in a series previewing the 2019 SEC football season

HOOVER, Ala. -- This is a crucible season for second-year Mississippi State Coach Joe Moorhead.

The Pittsburgh native must replace record-setting quarterback Nick Fitzgerald and most of the impact talent off the nation's top statistical defense in 2018.

SEC championship scenario The Bulldogs should be strong in the running game with an experienced line clearing holes for rising star Kylin Hill, but the passing attack must be better behind projected QB starter Keytaon Thompson or Tommy Stevens. If the defense loaded with upperclassmen finds ways to replace key starters, Mississippi State could be a dark horse to make a run at Alabama.

Can the Bulldogs hold the form and production from the last half-decade that was started by Dan Mullen with top-shelf quarterbacks like Dak Prescott and Fitzgerald? Or are they on a trajectory toward the bottom of the SEC West, their historic habitat?

Moorhead talked at SEC Media Days last week about taking what Mullen has built to the next step.

"And the challenge of taking over a program where Coach Mullen had done an excellent job building it to a certain level was taking the next step. Year two of all the places I've been, you've seen us take that next step and understanding it's as much about the little things, the attention to detail, the accountability on and off the field as much as it is the Xs and Os and how we perform."

In an admission seldom seen from Power 5 coaches, Moorhead said his big-talk approach to his rookie season in the SEC might have been a little over the top as he transitioned from his successful role as offensive coordinator at Penn State.

"I'm not saying I'm changing what our goals are, but the approach of coming off the plane guns blazing, talking about ring sizes and Heisman trophies and the expectation level of the team entering the season, prior to me even getting there," he said, "I think what I did with that, without knowing the history and the context of how difficult it is to win in this league, and specifically Mississippi State, where there's two 10-win seasons in school history and two championship appearances ... and I think what I may have done is elevated the expectation level to a point where nothing that we did short of a championship was going to make people happy."

The Bulldogs have held solid contender status in the SEC since topping the first College Football Playoff poll in October 2014, but they haven't broken through the top of the power structure in the SEC West in more than 20 years.

Now the Bulldogs will find out if they can stack a winning season on top of an 8-5 finish that didn't fully capitalize on a defense that ranked in the top 10 of all four major statistical categories. They led the FBS by allowing 263.1 yards per game and ranked second by allowing 13.2 points per game.

Broyles Award finalist Bob Shoop is ready for his second run as coordinator for the Bulldogs' defense, though this one features far fewer veteran standouts. The unit lost havoc-wreaking linemen Montez Sweat and Jeffery Simmons as well as safety Jonathan Abram, all first-round NFL Draft picks.

Shoop's defenses have ranked in the top 25 in six of the past eight seasons.

Junior linebacker Errol Thompson said don't count the Bulldogs out from having a similar defense.

"Last year we had the No. 1 defense not always because of the guys but the way we practiced and the way we prepared," Thompson said. "Coach Shoop is doing a great job with that as well this year.

"I feel like not only me and Leo Lewis can be the backbone, but you look at guys like Willie Gay, Chauncey Rivers, Kobe Jones and Cam Dantzler, he's a preseason All-American. Guys like that can also be the backbone of this defense."

Every projected starter on defense is a junior or senior with the exception of sophomore free safety Marcus Murphy.

"We lost some guys you really can't replace -- Jeffery Simmons, Montez Sweat, Nick Fitzgerald -- but I believe our younger guys are ready to step up and they have huge chips on their shoulder because they have huge shoes to fill," Green said.

The offense returns top backs Kylin Hill and Nick Gibson running behind a front with three starters back: center Darryl Williams and Stewart Reese and Greg Eiland on the right side. A hamstring injury the second half of the season limited Hill to 734 rushing yards on 117 carries, roughly half of Fitzgerald's attempts.

With the loss of Fitzgerald the Bulldogs have a quarterback battle brewing between 6-4 junior Keytaon Thompson, the top backup the last two seasons, and 6-5 Tommy Stevens, a grad transfer from Penn State.

The Bulldogs completed 51.1 percent of their passes last season, the worst figure in the SEC, and ranked 13th in the league with 173.8 passing yards per game.

Moorhead and the Bulldogs envision a lively battle at the position.

"Last season we were still trying to work into this offense," he said. "Now that it's Year 2, I feel guys are locked in to the plays now, feeling better and more comfortable. I think we're ready for a good season."

Moorhead noted he worked with Stevens for two years at Penn State.

"I think he or any quarterback that we coach or bring into our system, we want the quarterback to be able to beat you with his brain, his arm and his legs," Moorhead said. "And I think Tommy is a kid with a lot of physical tools. Strong arm. He can really run.