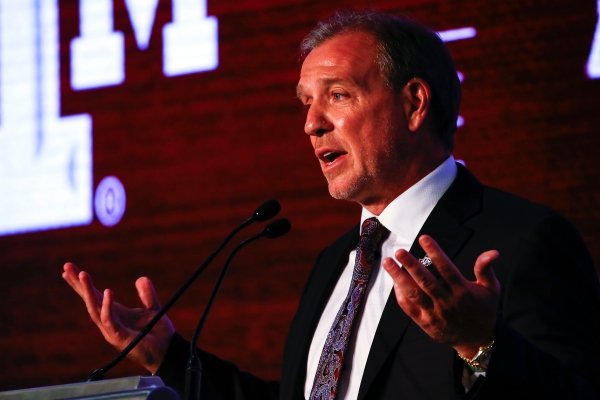 HOOVER, Ala. -- If Texas A&M is to earn its first College Football Playoff berth, the Aggies will have to take care of a daunting schedule in the second year under Jimbo Fisher.

The Aggies will play three powerhouses likely to be ranked in the top five of many preseason polls, and the action starts early with a road date to defending CFP champion Clemson in Week 2. Texas A&M also hosts defending SEC champion Alabama on Oct. 12 and plays at defending SEC East champion Georgia on Nov. 23.

Thirteenth in a series previewing the 2019 SEC football season.

Texas A&M at a glance

SEC title scenario The Aggies seemingly have the talent level, firepower and coaching chops to make a push for the SEC West title. If Mond makes continued strides behind a veteran line, the skill talent should shine. Finding quality replacements on defense, where the Aggies allowed too many deep balls, is the key to whether they’ll challenge.

Fisher was asked at SEC media days if calling the Aggies a "spoiler" would be condescending.

"Condescending," Fisher said. "We don't want to spoil anything. We want to take care of our own, and they are great teams. But we expect to play with them and compete with them and win those games. That's why we're here."

Junior quarterback Kellen Mond noted the brutal slate is on the Aggies' minds.

"I think it's a really good opportunity for us," Mond said. "Every single day in the weight room this offseason we're reminded that we have one of the top schedules in the country. If we're not putting that same work in the weight room, then it's not going to translate to the field.

"We're all excited about the opportunity that we get, but we all know in our mind that we can play with any team in the country."

Defensive tackle Justin Madubuike, who had 10.5 tackles for loss last season, called the schedule an open door to showcase the Aggies' strengths.

"We're not going into any stadium expecting to lose," Madubuike said. "That's not the way Coach Fisher coaches us. Every game we expect to win."

Optimism is on the rise behind Fisher -- who signed on as Texas A&M coach with a 10-year, $75 million deal -- due to a strong finish and a sizable pack of returning talent. Texas A&M's nine victories matched its highest total since Johnny Manziel's final season in 2013.

The Aggies broke a seven-game losing streak against LSU with a 74-72 victory in seven overtimes on Thanksgiving weekend, then pounded North Carolina State 52-13 in the Gator Bowl.

Mond has the clear reins at quarterback with the transfer of Nick Starkel to the University of Arkansas, and the 6-2 junior is not lacking for confidence.

"In my opinion, I'm the best one," Mond said at SEC media days of the the quarterbacks in the SEC. "That's not just because I'm a confident person. I actually believe that."

"That's where he's getting to," Fisher said. "He understands he has to be a student of the game, and I think that's the most fun we have. He works his tail off. Nobody works any harder, but he also works in the film room, too."

Mond is aiming to reduce the 34 sacks and nine interceptions he suffered last year.

The Aggies lost tailback Trayveon Williams, who ran for a school-record 1,760 yards last year, as an early declarer for the NFL Draft. They return Jashaun Corbin, who led Power 5 players with a 30.1 yard kickoff return average, and big back Cordarrian Richardson (6-0, 246).

Four of five starters are back along the offensive front, led by tackles Dan Moore and Carson Green. The Aggies must improve on pass protection for Mond.

The junior trio of Quartney Davis, Kendrick Rogers and Jhamon Ausbon has a chance to be one of the liveliest receiving groups in the country. The 6-4 Rogers provided theatrics in some games, like the overtime epic vs. LSU, but he also had two or fewer catches in eight games.

The Aggies return only four starters on defense, but there is optimism the unit will make strides in its second year under coordinator Mike Elko. The secondary must perform better against the pass after allowing 54 pass plays of 20-plus yards, most in the SEC and seventh most in the FBS.

Punter Braden Mann is back after winning the Ray Guy Award with an NCAA-best 50.98 yard average. The Aggies are looking for more consistency at place kicker, where Seth Smalls and Daniel LaCamera combined to go 23 of 33.