A fresh start: Starkel not here to make friends in Hogs' QB battle 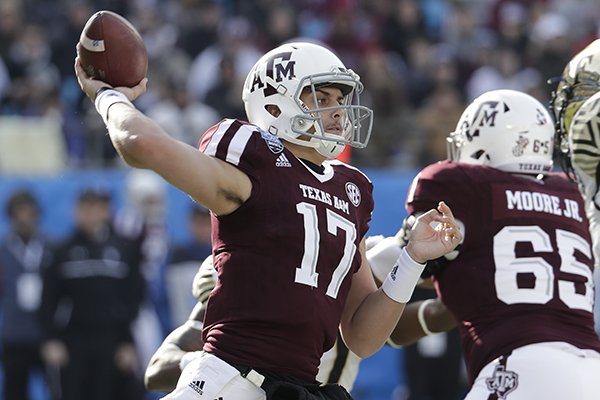 He's an outspoken, maybe even brash, social-media maven and unabashed Justin Bieber believer with a big arm and big ideas about where the University of Arkansas program is headed.

The 6-4 graduate transfer arrived on campus in late May with two years to play, and he's got his sights on the starting quarterback job along with fellow transfer Ben Hicks.

"Fall camp, I just see myself going out there Day 1 trying to set the tone," Starkel said. "This is what we're here to do. We're here to win games, and if you're not trying to do that, then get out of here."

Starkel strikes up intriguing possibilities for the Razorbacks.

Coach Chad Morris said he's been impressed with Starkel's leadership and confidence level, and he's eagerly taken in the reports from teammates in offseason skills and drills work.

"Listening to our players talk, he's been out on the field with them throwing," Morris said. "He demands a certain respect and commands leadership, and the ball definitely is electric when it comes out of his hands."

First-year Coach Jimbo Fisher, who replaced Kevin Sumlin, opted to roll with Mond as his starter in 2018, and Starkel played sparingly while finishing up his undergraduate degree in business.

Nick Starkel at a glance

NOTEWORTHY A finalist at the Elite 11 camp in summer 2016, where “coach” Trent Dilfer compared him to Jared Goff. … Signed with Aggies over Oklahoma State, UCLA and Yale. … Broke A&M freshman records in the Belk Bowl after the 2017 season with 499 passing yards, 4 touchdowns and 42 completions. The 499 passing yards are an A&M bowl record. … Signed with Arkansas as a graduate student over Ohio State, Florida State and numerous smaller school offers.

"We find out we're getting Jimbo Fisher, and I was pumped about that," Starkel said. "I was like, 'He's going to use a pro-style quarterback and everything.' He gets there, and he wants to go in a different way with the offense.

"Him and I have had this conversation. I told him I think he made the wrong decision. And he said OK. I said, 'I'm going to show you that every day at practice,' and I feel like I had the better spring ball when he first got there. And I feel like I had the better fall camp. We got into it a little bit with some disagreements, then ultimately just ended up playing Kellen. They had a good year I thought, but it just hurt me to not be the guy anymore."

Starkel said he's excited to join the Morris-Joe Craddock offense at Arkansas, which features plenty of run-pass options (RPOs) for the quarterback.

"It's an offense that I'm familiar with because of what I did my first two years at Texas A&M," he said. "It's a lot of the same RPOs, down-the-field passing type of stuff. For me now, it's just what they call it, it's the verbiage. It hasn't been too hard."

Starkel didn't sugarcoat his relationship with Hicks, the SMU transfer who took first-team reps in spring ball and has the added advantage of playing in the offense in two previous seasons with Morris and Craddock.

"I'm not going to sit here and say we're like friends," Starkel said. "That's not really how it is. It's weird. I was talking to one of my friends about this the other day. Quarterbacks in a quarterback room can never really be best friends.

Starkel said Hicks has been helpful in teaching the ins and outs of the system to offensive players.

"I haven't gone to him and said, 'How do you do this or this?' because there are coaches here that can teach me that," he said. "I've been meeting with the coaches and going over that myself, and working with the receivers as well.

Starkel's skill set is vouched for by his former teammates and Fisher, who called him an outstanding person and player.

"He has a great arm," Fisher said. "He can throw it. He's had great success in this league. And Nick is one heck of a player. He is going to be an extremely tough guy to go against, I have no doubt about that."

Mond, speaking at SEC media days, said he felt Starkel's leadership skills "set him apart" while they were jostling for the job.

"We're really close," Mond said. "Even our freshman year, whenever he was the starter and I was the starter, we were always trying to compete, but also build each other up."

Mond expects Starkel to become a leader for the Razorbacks.

"I feel like when you're a leader on the team and then you start having success, you gain a lot of respect from other players, so I look forward to him going and stepping on campus and kind of fulfilling that same role of being that leader that he is," he said. "He's always going to be vocal and along with that, I know he has a strong arm and he can play with a lot of other quarterbacks in the nation."

Texas A&M defensive lineman Justin Madubuike called Starkel a "good friend" who came in with him in 2016.

"I love Nick. He's a great guy, but he's not an Aggie anymore," Madubuike said at SEC media days. "So we have to put it on him if he steps out on that field. But after that, it's all love again."

Starkel's new teammates also commented on him at media days.

"He's a good quarterback," tailback Devwah Whaley said. "He can throw it. He can run. He's smart. He has some special abilities that could definitely help the team out."

"He's way bigger than I thought he was, especially when he takes off his shirt or whatever," Harris said. "He's just bigger. He's kind of like a Cole Kelley, but he's more slimmer and leaner than Cole. He's bigger than what he looks inside his uniform."

Said McTelvin Agim, "He's got an arm. He can put it there for sure."

Starkel got animated when talking about the potential he saw in the Razorbacks, who went 2-10 overall and 0-8 in the league last year.

"You watch the end of these games, and you say if they can just finish, they're a six-win team automatically. And if we could fix a little bit, we could be an eight-win team, a 10-win team very soon.

"So I saw that potential. I'm not big on, you know, if you were bad last season, you're going to be bad this season. I don't believe in that."

Starkel thinks he can prosper in the Arkansas offense.

"I feel like I can get the ball out quick enough, make the right decision, the right reads quick enough to where we're not sitting back there for three and a half seconds doing a deep drop-back pass against these SEC D-linemen and front seven," Starkel said. "Because that right there can just ruin you.

"You've got to get the ball out of your hands quick, get the ball to some athletes. I know that my job as a quarterback is to not go make every play. My job is to get the ball in the hands of the playmakers. Whether that's throwing a screen pass or throwing a go ball or a corner route.

"Whatever it is, the ball's going to be out on time with me, and I'm going to have the right read. That's just what I've prided myself on, and that's how I've tried to make a living in the SEC West."

Starkel is probably best known by Arkansas fans for his social-media presence, which helped him land a date in College Station and provided a platform for trying to meet the singer Justin Bieber. He and a mentor, J.D. Rodgers of Watermark Church in Dallas, made a video of Starkel lip-syncing a Bieber song at Kyle Field and tried to get Ellen DeGeneres to play it on her show in Los Angeles. The hope was that the efforts would lead to a meeting with Bieber.

He still hasn't met the singer, but he hasn't stopped trying.

Starkel wore a Bieber T-shirt under his shoulder pads and considered it a good luck charm when he passed for a Texas A&M record 416 first-half yards in a 55-14 rout of New Mexico on Nov. 11, 2017, his first start after recovering from the ankle injury.

He also posted a picture of himself on social media in his No. 17 Arkansas jersey with a Bieber T-shirt underneath with the caption: "It has officially made a comeback...@justinbieber" on July 16.

"I just have fun with what I do," Starkel said. "I'm going to be myself. I'm not going to act like I'm this super-tough intimidating guy that's going to be like that 24-7.

"That's not me. I like to have fun. I smile and laugh before pre-game. I don't listen to music, actually. I just kind of be where my feet are, and I enjoy it because I know this time here playing college football is not going to be forever. I'm just going to go out there and have fun while I'm doing it."