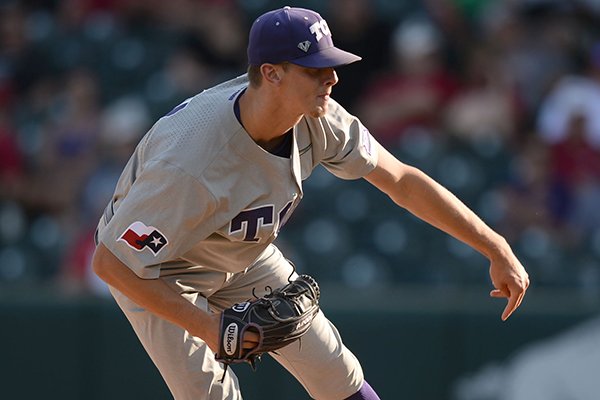 TCU starter Brandon Williamson follows through with a pitch Friday, May 31, 2019, during the first inning of a game against California at Baum-Walker Stadium in Fayetteville.

FAYETTEVILLE -- Those who doubted TCU's credentials for the at-large NCAA Tournament berth the selection committee bestowed on the Horned Frogs won't have much to say after Friday night's display.

The No. 3 seed Horned Frogs nicked away at No. 2 seed California, then piled on six runs in the sixth inning en route to a 13-2 victory in the late game of the NCAA Fayetteville Regional before a crowd of 3,518 at Baum-Walker Stadium.

"We didn't come here to win a ballgame, we came here to win the tournament," TCU Coach Jim Schlossnagle said about his decision to hold his ace Lodolo for today. "This was our best chance."

Asked what he expected from tonight's game against the Razorbacks, Schlossnagle said, "It's gonna be fun, man. It'll be like a College World Series environment in here."

The Horned Frogs were considered the last at-large selection for the tournament with the No. 59 ranking in the Ratings Percentage Index.

"These guys feel pretty good about themselves, and that's a pretty good place to be," Schlossnagle said. "A confident player is a dangerous player."

TCU designated hitter Hunter Wolfe went 3 for 5 with a home run and 2 doubles while driving in 4 runs to lead the Horned Frogs' 14-hit attack.

"I started seeing the ball good in Oklahoma City in the Big 12 Tournament and carried that into tonight," he said. "I was fortunate to get some good pitches to hit and put the bat on them."

Asked about the matchup against Arkansas, Wolfe said, "We're facing a good team, and I know this place is going to be rocking. I know we'll be up to the test."

TCU center fielder Johnny Rizer hit a two-run home run in the big sixth and was 3 for 6 with 3 RBI and a run scored.

Austin Henry, Conner Shepherd and Adam Oviedo all had two hits for the Horned Frogs.

The Golden Bears played a sloppy game in the field with 3 errors leading to 3 unearned runs, 8 walks, a balk and 3 passed balls.

"I must say we didn't play very well," Cal Coach Mike Neu said. "It's not indicative of the way we play.

"We kind of stepped on our own feet defensively, and that's what put us in the hole. We got down in the sixth inning, and it was tough from there."

The Horned Frogs got on the board in the first inning against Cal right-hander Jared Horn (6-2), who entered the game with a 1.82 ERA.

Wolfe doubled with one out and Jake Guenther drew a walk behind him. Horn rallied from a 3-0 count to strike out the clean-up man Henry, but both runners were on the move on the strikeout pitch, and Wolfe scrambled home when catcher Korey Lee's throw to third base soared high into left field.

The Horned Frogs jumped out to a 2-0 lead in the third as Guenther and Henry singled, and Rizer's ground ball brought in a run.

Cal scratched a run off of Williamson in the fourth as Andrew Vaughn drew a leadoff walk and came around on singles by Lee and Darren Baker.

Vaughn, the reigning Golden Spikes Award winner, went 0 for 3 with a run scored. Baker, the son of former Major League player and manager Dusty Baker, was particularly pesky. The second baseman had a hit and a walk, and stole a base to improve to 20 for 20 on the season.

Wolfe blasted his home run deep to left field in the fifth inning to make it 3-1, but that cushion was soon to balloon.

TCU third baseman Conner Shepherd led off the sixth with a single. When Horn threw wildly to first base on Adam Oviedo's sacrifice bunt, his night was done after 114 pitches. Horn gave up 5 runs, 3 earned, on 7 hits and 3 walks, and struck out 6.

Josh Watson drew a walk to greet reliever Rogelio Reyes, then Wolfe cracked a two-run double to left field to make it 5-1.

After Guenther's sacrifice fly and Henry's RBI single, Rizer capped the uprising with a two-run shot over the center-field wall.

Wolfe also scored three times as one of eight TCU starters to score a run.

Nine-hole hitter Connor Mack led the Golden Bears with a 2-for-3 performance with a double and a run scored.