Hogs get into swing: Bats come alive in NCAA opener 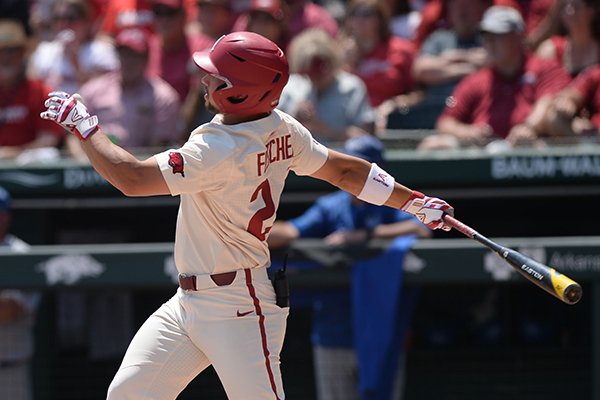 Arkansas center fielder Dominic Fletcher follows through Friday, May 31, 2019, as he hits an RBI single scoring designated hitter Matt Goodheart during the fifth inning of the Razorbacks' 11-5 win over Central Connecticut at Baum-Walker Stadium in Fayetteville.

The Razorbacks had 13 hits -- including home runs by Heston Kjerstad and Trevor Ezell -- to beat Central Connecticut State 11-5 in the NCAA Fayetteville Regional opener before an announced crowd of 9,858.

Arkansas (42-17) will play TCU, which defeated California in Friday's late game, at 6 tonight. CCSU (30-22) will play Cal in an elimination game at noon today.

Going into the regional, the No. 5-ranked Razorbacks went 20 for 127 -- a .157 batting average -- in their previous four games when they lost at Texas A&M and went 1-2 in the SEC Tournament.

"I was hoping we'd break out," Arkansas Coach Dave Van Horn said. "Sometimes you just have to think back to other seasons this time of the year, and how they finished."

Van Horn went back 10 years when the Razorbacks lost their final eight SEC games, then made a run to the College World Series that started with their 10-3 victory over Washington State in their regional opener.

"If you think about that 2009 season, we couldn't get out of our own way at the end of the year," Van Horn said. "Then we finally broke out late at the end of that first game of the regional. Then, we didn't stop hitting.

"I was kind of hoping that would happen. We showed signs of breaking out today."

In three SEC Tournament games last week, Arkansas was 3 for 24 with runners in scoring position and 7 for 43 with runners on base.

"I thought they were really aggressive," Blue Devils starting pitcher Brandon Fox said. "I definitely had to mix a lot because if I threw too many of the same pitch in a row, they were going to cheat to it and jump all over it.

"I know they were cold in the SEC Tournament, but they came out ready to play today."

"They're not the fifth-ranked team in the country for no reason," Hickey said. "We just had to have balls hit at us. But they were aggressive, and they got up there and took advantage of some counts."

Including four walks, Arkansas put 17 runners on base.

"That's going put a lot of pressure on you," Hickey said. "They broke through when they needed to."

Kjerstad went 3 for 4 with 2 RBI. He also scored twice.

"A lot of people had said we had struggled ... but at the end of the day, that's baseball for you," Kjerstad said. "Your offense isn't going to be hot every game of the year.

"But I just saw we stuck with it and kept our approaches, and today it paid off and we put up runs like we had been most of the season. It was really nice for all of us."

Kjerstad singled and scored Arkansas' first run in the second inning when the Razorbacks took a 2-0 lead. He led off the fourth inning with a home run, and had an RBI double in the fifth.

"I thought he did a really good job of laying off some low pitches early," Van Horn said. "He was just being a little more selective and not going out of the zone after a lot of pitches when he got behind. That was really good to see."

Kjerstad said the Razorbacks were rested and ready after having short practices this week.

"We go through a beating in a whole season, from working out to playing games all the time to traveling," Kjerstad said. "A little rest and recuperating really helps the body and helps your mind, too. I think it showed today."

CCSU scored an unearned run to cut Arkansas' lead to 6-2 in the sixth inning with the help of three errors by the Razorbacks: two by shortstop Casey Martin and one by first baseman Trevor Ezell.

Kevin Kopps -- who replaced Connor Noland with one out in the inning -- struck out Dave Matthews swinging and Buddy Dewaine looking to strand two base runners.

"[Kopps] came in and made some terrific pitches in some big spots," Hickey said. "That was our window to try to close [the gap], and we didn't accomplish that."

Arkansas responded with three runs in the sixth to push its lead to 9-2.

Ezell went 3 for 5 and had 3 RBI, including a two-run home run in the eighth inning to put Arkansas ahead 11-5 after TT Bowens' three-run home run against Marshall Denton had made it 9-5.

"When they scored, we scored pretty much every time," Van Horn said. "We never really let them feel like they were getting back into it."

Jack Kenley and Christian Franklin each had two hits for Arkansas. Seven Razorbacks had at least one hit.

"Every pitch, I had to compete," said Fox, who went 4 2/3 innings. "I couldn't take a pitch off because they would capitalize on it.

"We're all feeding off each other," Kjerstad said. "I mean, it's the postseason, right? You got to win or else you're going to go home, and everybody knows that. It comes out in all of us."