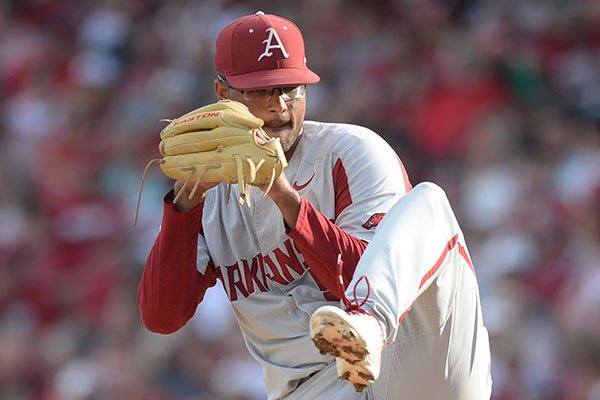 Arkansas starter Isaiah Campbell delivers to the plate Saturday, June 1, 2019, during the first inning against TCU at Baum-Walker Stadium in Fayetteville.

FAYETTEVILLE -- University of Arkansas Coach Dave Van Horn and pitching coach Matt Hobbs were in the dugout discussing whether to send starter Isaiah Campbell back out for the eighth inning against TCU on Saturday night.

"We were getting real close to taking him out after seven," Van Horn said. "We were down there talking about it. Do we leave him in? Do we bring so-and-so in?

"Next thing you know, Isaiah came around the corner and said, 'I'm good.' We just looked at each other and said, 'OK, we're going to leave him in.' "

It was a good call by Van Horn and Hobbs.

Campbell retired the Horned Frogs in order in the eighth inning, and Arkansas closer Matt Cronin did the same in the ninth as the Razorbacks beat the Horned Frogs 3-1 in the NCAA Fayetteville Regional at Baum-Walker Stadium before an announced crowd of 10,614.

The No. 5-ranked Razorbacks (43-17) will play at 8 tonight in a championship game against the winner of today's 2 p.m. TCU-Central Connecticut State game. If Arkansas loses tonight, there will be another championship game at 6 p.m. Monday.

"I feel real good about being at home and being 2-0," Van Horn said. "We're right where we want to be, but in the same breath, we still haven't done anything.

"We still have a lot of work to do, and our guys know that."

"He showed why he's one of the best pitchers in the country," TCU catcher Zach Humphreys said. "You didn't want to get behind when he was pitching.

"I mean, we were up there swinging, but he had good stuff. He worked both sides of the plate, and it was not a fun night to hit against him. He's got really good velocity, got two really good breaking balls and really good off-speed in general. When he can throw all four of those for strikes, you can't really eliminate anything."

"I thought Campbell was outstanding," Horned Frogs Coach Jim Schlossnagle said. "He was aggressive in the strike zone, very efficient with his pitches.

"We didn't get very many good swings on him at all."

Campbell, who has gone six or more innings in 12 of his 18 starts this season, matched his career-high with eight innings against TCU.

"He's been outstanding all year, but tonight you could kind of tell it was something different," said Arkansas catcher Casey Opitz, whose two-run single in the sixth inning put the Razorbacks ahead 2-0. "Tonight was probably the best I've seen him keep control of his stuff throughout the whole game.

"You could really tell in the eighth that he still had command of every pitch in his arsenal. He just did a great job keeping hitters guessing and not leaving too many balls out over the middle and hitting corners."

Campbell said he heard the crowd roar when he came back out to pitch the eighth inning.

"It gave me a little adrenaline to keep going and get through the eighth," Campbell said. "For me, it was just staying in the present moment and keep doing what I was doing all night."

Arkansas scored three runs in the top of the sixth inning -- after Haylen Green replaced TCU starter Nick Lodolo -- to take a 3-0 lead.

"I just felt like Nick was out of gas," Schlossnagle said.

Lodolo, projected as a first-round draft pick, threw 93 pitches and allowed 4 hits, 4 walks and hit a batter while striking out 6. He struggled with his control after the first three innings.

"In the fourth inning, I just lost it there," said Lodolo, who walked three batters and hit one in the fourth without giving up a run. "I couldn't tell you why. I just did."

In the sixth inning, Jack Kenley hit a grounder back to Green, who threw to shortstop Adam Oviedo to get a forceout at second. Kjerstad initially was called out despite Oviedo dropping the ball.

After a video review, it was ruled Oviedo didn't have control of the ball and Kjerstad was called safe.

Christian Franklin attempted a bunt, popped it up and Humphreys made a a sliding catch after first bobbling the ball.

Jacob Nesbit hit a single to load the bases and Opitz -- the Razorbacks' No. 9 hitter -- lined a two-run single up the middle to break the scoreless tie.

Nesbit was thrown out at third base, but Trevor Ezell hit a two-out double to score Opitz and make it 3-0.

Ezell finished 4 for 5 with 3 doubles.

TCU pulled within 3-1 in the seventh inning when Austin Henry doubled, went to third on Johnny Rizer's single and scored on a sacrifice fly by Humphreys.

Cronin earned his 12th save when he struck out TCU cleanup hitter Austin Henry swinging after he had fouled off three 3-2 pitches.

"He needs to be pitching in a higher league," Schlossnagle said of Cronin. "It's fun when you have a guy coming out throwing that hard and throwing strikes.

"He's awesome. Fun to watch, just not in our dugout."

Schlossnagle didn't have much fun watching Campbell, either.

"Thank goodness he can't pitch again this weekend," Schlossnagle said. "Maybe we'll get to play the Razorbacks again, but Central Connecticut played great [in beating California 7-4 on Saturday] so nothing is guaranteed."

"Two really good starters going at it," Van Horn said. "After each inning we were saying, 'That's round one. That's round two.' Just like it was a fight."