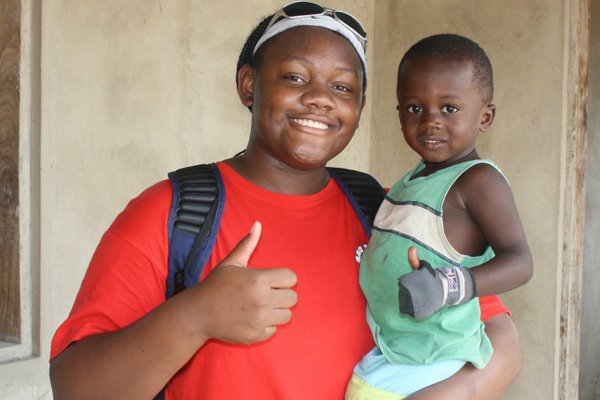 The University of Arkansas center commitment arrived in Ghana on that day for a mission trip with several classmates from Madison (Ala.) Academy. The moment her flight touched down, she realized how fortunate she is to live in the United States.

"Even at the airport, I just see how blessed we are," McGhee said. "I just knew it was going to be a life-changing experience as soon as we touched down at the airport.

"Everything is just so chaotic. Airports here aren't as chaotic. There were people trying to steal other people's bags, so we had to watch out for that."

McGhee, who committed to the Razorbacks about a month after the trip, boarded a van with her classmates to travel to an orphanage, but recent rainfall complicated the trip.

"The roads are dirt," said McGhee, who's rated a four-star prospect and the No. 7 post player for the Class of 2020. "Everything was wet, and there were a whole lot of potholes. It was suppose to take us four hours to get to the destination, but it took us six hours because of all of the potholes."

She and her friends arrived at the orphanage and were greeted by grateful children.

"Their faces lit up when they saw us," McGhee said. "They're so welcoming. They ask you your name."

McGhee learned a valuable lesson from the children who have very little.

"They have joy, like forever joy," McGhee said. "That shows that I can have joy and I shouldn't complain about anything because they want to experience what I have."

Seeing the children's appreciation of life was an eye opener.

"Now when I'm getting so mad, I say, 'Those Ghana kids have it way worse than me," ' she said. "They still have a smile on their face. I try and think about that every day and try and keep a smile on my face."

Cellphones often occupy American teenagers much of the day, which often limits interpersonal interactions. McGhee cherishes her time with family and friends since her trip.

"I don't take time with people for granted anymore," McGhee said. "I think I use to do that. I saw those kids and they don't take it for granted."

A normal household task in America is more of a chore in Ghana.

McGhee doesn't hesitate to remind others they have nothing to complain about.

Boarding the flight back Oct. 12 was bittersweet.

"It was so hard to leave," McGhee said. "I didn't want to go. I was in tears and the kids were crying. We built a very strong relationship with those kids in a week. I'm not old enough, but I wanted to adopt all of them."

McGhee said her mother has noticed a difference in her since the trip.

"My mom said I seem more humble," McGhee said. "She said I don't take as much for granted. I try to do everything not to because those kids have nothing. That trip is going to stay with me forever.

"I'm going to try and go back. It made me more humble and showed me not to take things for granted."