Cronin selected by Nationals in 4th round of MLB Draft 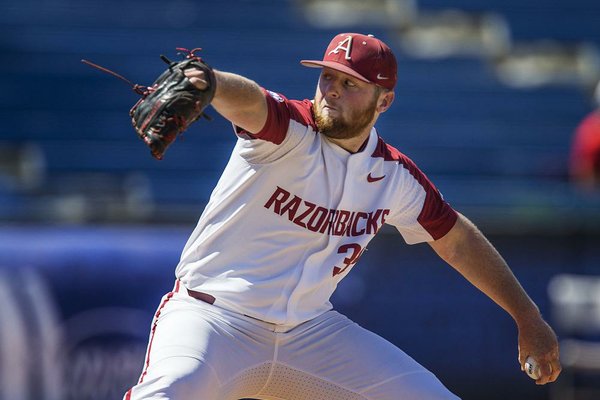 NWA Democrat-Gazette/BEN GOFF @NWABENGOFF Matt Cronin pitches for Arkansas in the 8th inning vs Ole Miss Wednesday, May 22, 2019, during game 6 of the SEC Baseball Tournament at the Hoover Metropolitan Stadium in Hoover, Ala.

FAYETTEVILLE — With a dynamic fastball from the left side, Matt Cronin had firmly positioned himself as a high-value draft target by the second month of last season.

It was just a matter of time before that big arm turned into a big payday.

Cronin was selected by the Washington Nationals in the fourth round with the 123rd overall pick of the MLB Draft on Tuesday. According to MLB.com, Cronin's position in the draft has a suggested signing bonus value of $464,500.

He is expected to turn pro following the conclusion of the Razorbacks' season.

Cronin, a 6-2, 225-pound junior, is one of the most decorated closers in program history. He recorded his 12th save of the season Saturday in the Razorbacks' NCAA regional victory over TCU.

“He needs to be pitching in a higher league,” TCU coach Jim Schlossnagle said after the game.

Cronin's 27 career saves are second-most in program history behind Phillip Stidham, who had 33 over three seasons. Cronin set the school's single-season saves record with 14 as a sophomore and could challenge it if the Razorbacks advance past this weekend's super regional.

His dominance has come while throwing primarily one pitch, a fastball that consistently sits 93-95 mph and can touch 97 mph. Cronin throws fastballs almost exclusively when he pitches for the first time during a series, then sprinkles in some more breaking pitches if he throws on consecutive days.

"His fastball is what they're looking for up there," Arkansas coach Dave Van Horn said earlier this year. "And I mean way up there, in the big leagues."

Cronin flew under the radar of scouts and a lot of college coaches as a high school pitcher in Navarre, Fla. He was not drafted out of high school and recruited himself to Arkansas, his mother's home state where she hoped he would attend college.

“He came here for a camp the summer before his junior year in high school," Van Horn said last year. "I really didn't know how he got here.”