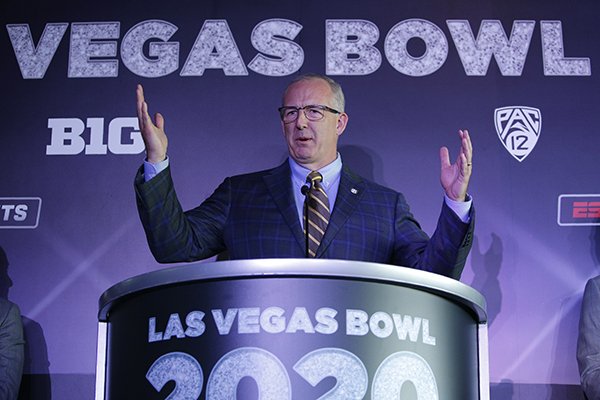 SEC Commissioner Greg Sankey speaks during a news conference to announce changes to the Las Vegas Bowl football game, Tuesday, June 4, 2019, in Las Vegas. The Las Vegas Bowl is moving to a new, bigger stadium next year, and will feature teams from the SEC or Big Ten conferences against a Pac-12 contender. (AP Photo/John Locher)

FAYETTEVILLE — The Southeastern Conference has added two bowls and dropped the Independence Bowl from its postseason affiliations.

Beginning in 2020, the Las Vegas Bowl will move into the city’s new NFL stadium that will be home to the Raiders. The Gasparilla Bowl is played at Raymond James Stadium, home to the NFL’s Tampa Bay Buccaneers.

The SEC partnership with the Independence Bowl will end after the upcoming season.

The SEC has also cut back on the number of years it will send a representative to the Belk Bowl, from annually to each odd-numbered year between 2021-25.

As part of the upcoming bowl cycle announced Tuesday, the Las Vegas and Belk bowls will alternate among the league’s “pool of six” bowl games between 2020-25. The other pool of six games include the Outback, Gator, Music City, Liberty and Texas bowls.

The highest-ranked SEC team that does not participate in the College Football Playoff will continue to play in the Sugar Bowl, and the Citrus Bowl will have the first pick of an SEC team that is not part of the New Year’s Six bowl games.

Excluding the Sugar Bowl, all of the SEC’s bowl contracts run through the 2025 season.

The SEC has been affiliated with the Independence Bowl in Shreveport, La., most years since 1995, although it has not had enough bowl-eligible teams to play in the game several times, including three of the past four seasons.

Played at the aging Independence Stadium, the bowl game has faced a number of obstacles in recent years, including declining attendance and the loss of three sponsors since 2013.