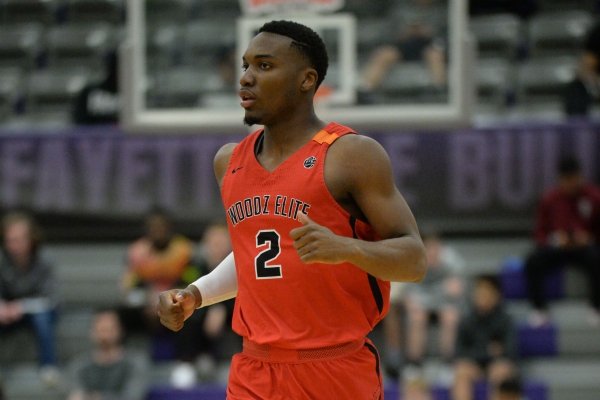 Coleman liked what he saw from guard Moses Moody, 6-6, 190 pounds, of Montverde Academy in Florida.

"Moses Moody was one of the top 10 kids in the camp," said Coleman, who's in his 41st year of scouting high school prospects. "Great shooter. He's showed he's developed a lot more ability to handle the basketball, create his shot a lot more than in the past. I thought he was one of the top two or three shooters of the camp. Especially off the dribble. He had a great camp from my standpoint."

Moody, who played at North Little Rock as a sophomore, averaged 18.5 points a game, seventh best out of the approximately 110 prospects at the event. An ESPN five-star prospect, he had 16 points and 4 rebounds in the top 30 cream of the crop game.

"I thought he was always a top 25 potential kid," Coleman said. "I think he showed that game is there."

Razorback forward target Chris Moore, 6-6, 220, of West Memphis averaged 11.2 points and 3.8 rebounds during the weekend. He scored 15 points in the top 60 cream of the crop game.

"Solid all weekend long," Coleman said. "A physical kid who battles on the boards and finishes on the drive really well. He showed a decent midrange jumper. I think he's got to extend that range to really fulfill the package and the promise of his athleticism, but I thought he had a really good camp."

Moore plans to make an unofficial visit to Memphis this week, then plans to visit Oklahoma State this weekend.

"I haven't seen Moore play a lot, but he showed athletically he can guard people at the highest level," Coleman said. "He competes, and now it's a matter of bringing these skills and extending that game to meet that."

Arkansas target and ESPN four-star forward Micah Peavy, 6-7, 195, of Duncanville, Texas, averaged 12 points and 5.4 rebounds for the weekend. He had 12 points, 2 rebounds and 4 assists during the top 30 cream of the crop game.

Coleman, who's on the McDonald's All-American Game selection committee, was impressed with Peavy.

"I think Peavy the first night was as good as anyone in camp," Coleman said. "He shot the ball really well. He didn't make shots as much as he did Friday, but he still has the ability to create off the dribble, get to the rim against just about anybody in the country."

ESPN five-star small forward Terrence Clarke, who received an offer from the Hogs on April 29, scored 18 points and had 3 assists while being named the co-MVP of the top 30 cream of the crop game.

He had the second-highest scoring average for the weekend with 25 ppg.

"I thought he had a really tremendous first day," Coleman said. "He does a lot of things out of that three spot. He's more of a point forward. Handles the ball very well in the open court, passes it really well."

Another Arkansas ESPN five-star target, guard Josh Christopher, 6-4, 205, of Lakewood (Calif.) Mayfair had 13 points, 2 rebounds, 2 assists, a steal and a blocked shot in the top 30 cream of the crop game.

"Josh is one of the better shooters in the class," Coleman said. "I thought he kind of played to the competition. Whoever he faced, if they were really good, he really stepped his game up. He's capable of being at that level all the time."