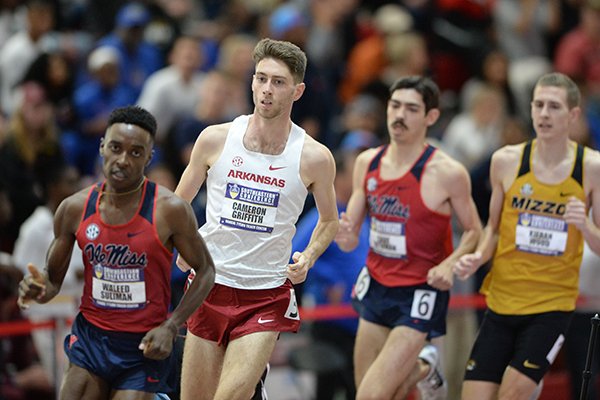 FAYETTEVILLE -- Three years ago as a University of Arkansas freshman, Cameron Griffith finished 41st in the 1,500 meters at the NCAA West Prelims.

"When you're a freshman and you're running against grown men, it either wakes you up and you rise to that level or you crawl in a hole," Razorbacks Coach Chris Bucknam said. "Cameron elevated his game and has gotten considerably better each season he's run."

Griffith, a senior from Sydney, Australia, is among the favorites in the 1,500 at the NCAA Outdoor Track and Field Championships, which begin today in Austin, Texas.

"I've come a long way since then physically and just in maturation," Griffith said while looking back on his freshman year. "I'm in a lot better shape, and I understand how to deal with the pressures of big races."

Griffith was a late addition to the field at the 2016 West Prelims because of another runner's injury.

"I'd taken a week off from training because I wasn't expecting to be there at all," he said. "But I'm glad I ran there, because it was good experience and getting to see how the regionals work.

"In Australia, I was one of the best junior athletes, and a big part of the reason I came to the U.S. was to run against top competition consistently. When I finished 41st, that definitely was motivational for me."

Griffith is a three-time All-American. He finished third in the 3,000 at the NCAA indoor meet earlier this year and was eighth in the 1,500 at last year's NCAA outdoors.

At this year's SEC outdoor meet, Griffith finished second in the 1,500 and third in the 5,000 after winning the 3,000 and taking second in the mile indoors. He also won the 3,000 at the SEC indoors last year.

"Cameron got off to a slow start here, but he's adjusted to things really well," Bucknam said. "He's done a phenomenal job. He's an unbelievable competitor, but he's also a great example because he never panics.

"If you watch him run, it's deceiving. He doesn't run with a lot of knee lift. He's just a really efficient runner and he's got a killer kick."

Griffith will run in the 1,500 semifinals today, and he hopes to advance to Friday's final. His personal-best time is 3:39.85.

"He's got a shot to win," Bucknam said. "But we're not getting ahead of ourselves. He's got to get through the semifinal round. So that's all we're focused on right now.

Griffith's path to Arkansas began with an email to the coaching staff in which he expressed interest in running for the Razorbacks. He sent emails to several colleges.

"I sent emails out to the top schools in the U.S. because we don't have an athletic program anywhere in Australia that parallels the NCAA," Griffith said. "I definitely wanted to come over here and train with the best people in the world."

Griffith, who has an indoor season of eligibility remaining for 2020 because he redshirted in 2017 after having his appendix removed, said he narrowed his college choices to Arkansas, Villanova and Oklahoma State.

"I eventually came on a visit and saw all the facilities here at Arkansas and met the coaching staff," Griffith said. "I said, 'All right, this is where I'm going.' I think this is the perfect place for me."

Griffith said he enjoys living in Fayetteville, but there are some things he misses about Australia.

"There are no beaches around here," he said. "That took some getting used to.

"Occasionally, I'll have a day where I'm like, 'Ah, I could just go for a swim in the ocean right now. That would be so much fun.'

"Freshman year it was a bit more of a shock. Now I'm used to living here. This is getting to be more of the norm."

Griffith has become so used to living in the United States -- and driving on the right side of the road -- that going back to Australia can be an adjustment.

"When I go home, I have to drive on the opposite side of the road," he said. "That kind of throws me off a little bit."