Arkansas moves on in 400-meter relay

By: John Harris, Special to the Democrat-Gazette
Published: Thursday, June 6, 2019 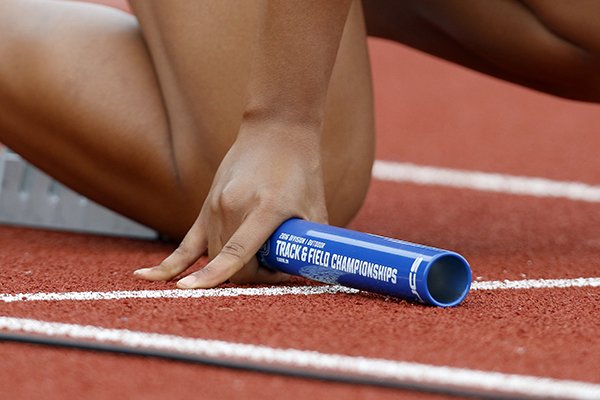 AUSTIN, Texas -- Arkansas' men, ranked No. 20 in the country, produced a traditionally strong performance in the 400-meter relay in the semifinals of the NCAA Outdoor Track and Field Championships on Wednesday at Mike A. Myers Stadium.

The Razorbacks recorded the sixth-fastest time among the three heats at 38.90 seconds to record the seventh-fastest time in school history and advance to Friday's final for an NCAA-record fifth consecutive year. North Carolina is second among Division I programs with three consecutive trips to the 400-meter final.

In addition, Arkansas senor Cameron Griffith qualified for the 1,500 meters finals with a sixth-place finish. Fellow senior Gabe Moore is currently in fifth place in the decathlon with 4,023 points with the final five events scheduled for today.

In the final event of the night, Brigham Young placed three runners among the top four in the 10,000 in a race won by the Cougars' Clayton Young in 29:19.60. Arkansas junior Gilbert Boit finished ninth in 29:32.03. The top eight earned All-America honors. BYU runners also finished third and fourth in the 10,000.

Arkansas' performance in the 400 relay was impressive for two reasons.

First, the Razorbacks recorded the second best time in their heat behind only LSU (38.37 seconds). Secondly, the Razorbacks did it despite a lineup change, which featured sophomore Kristoffer Hari running second and replacing freshman Rashad Boyd, who later ran in the 200.

The Razorbacks relay team featured two freshmen, one sophomore and one senior.

"We had a lot of changes," said Hari, who also competed in the 100. "But with people coming out here for the first time in the national championship like this, you couldn't be more proud of the team."

Freshman Joel Ogelsby, who led off the relay, said the Razorbacks ran the race with the intent of finishing high enough to continue their season Friday.

"I felt like It was a good start," Ogelsby said. "I knew I had to catch me one to put my team in good position to do what they needed to do."

Added freshman Tre'Bien Gilbert: "We knew we wanted to stick around and get in that No. 2 position and get a good time and a good lane for the final."

Also, junior Travean Caldwell finished seventh in his 400 hurdles heat in 49.75 seconds but did not qualify for the final despite having a faster time than runners who placed higher in slower heats.