Back on big stage: UA 2 go from NCAA to Palmer Cup

By: JEFF KRUPSAW SPECIAL TO THE DEMOCRAT-GAZETTE
Published: Thursday, June 6, 2019 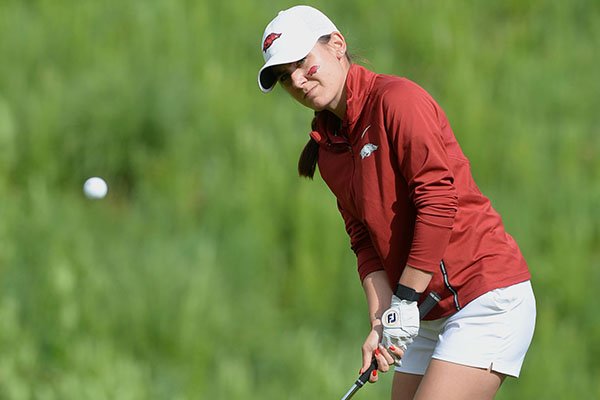 Kaylee Benton of Arkansas chips onto the 13th green Tuesday, May 21, 2019, during her match with Jennifer Kupcho of Wake Forest in the Women's NCAA Golf Championship at Blessings Golf Club in Fayetteville.

One of the unique aspects of this weekend's Arnold Palmer Cup competition is the presence of women playing alongside men at the highest level of international amateur golf.

It's not quite mano-a-mano at The Alotian Club, but college women and men representing the United States will be pairing up against men and women making up the International team. It will be the first time that women are participating in the event on American soil.

"I love the way men play golf," said Benton, influenced by older brothers Nicklaus and Colby. "That's how I try to design my game. I have a very boys' style game and mentality.

"A lot of it is their mindset. They definitely get angry, but they get over it really fast. Girls can get a little more emotional."

Kim, like Benton, said she also is looking forward to playing alongside the guys in Friday's mixed four-ball matches and Saturday morning's mixed foursomes (alternate shot).

"The guys are amazing players, they hit it so good," Kim said. "I think their personalities are fun to be around, too.

"I'm excited to be around them, and learn from them and the things they do."

Neither Benton nor Kim are out to outduel their teammates, rather to watch and learn from the way they play.

But Benton said her competitive fire, which is sometimes a blaze of flames, was stoked by Nicklaus and Colby while growing up in Cabot.

"They were tough on me and it made me really strong and tough," Benton said. "They made me who I am and they're reason I'm so competitive."

Growing up, Benton said she would watch her brothers eat quickly and leave the dinner table, and how they would race to the car for family outings.

She said she tried to emulate them.

"I used to try to eat faster than them and I would try to beat them to the car," Benton said. "Stupid things like that."

Benton said that impulse to beat her brothers carries over to recreational activities as well, like every time she and her Razorbacks teammates would go to the rec center in Fayetteville to play tennis or basketball.

The desire to seek and destroy was on display last month when the Razorbacks played host to the NCAA Women's Golf Championships at Blessings Country Club.

It was something she thought she had prepared for when she held the anchor spot in Arkansas' match-play dual in the quarterfinals.

"Every day in practice, I envisioned making that putt," she said, "and every day, the putt I picked was to win. I had played it over and over in my head."

Benton, a second-team All-American, did not get a chance to clinch the match for Arkansas because her opponent, Wake Forest star Jennifer Kupcho, kept making birdies down the stretch.

"It was very brutal," said Benton, the third Razorback to win the Dinah Shore Trophy for athletic and academic excellence. "We gave it a fight. I birdied the last four holes."

Kim said the opportunity to play on the Palmer Cup team for a second consecutive year is something she is not taking for granted, especially when she's representing her country.

"It's really a cool thing," said Kim, who participated in last year's Palmer Cup in France which the U.S. won 38.5-21.5. "As Americans, it's really hard to get an opportunity to play for your country."

Which is why Kim said it's important to enjoy activities surrounding this competition, including the pomp and circumstance of today's opening ceremony.

"To get to put on that blazer for your country, that's special, I think," she said.

Benton and Kim have used up their eligibility at Arkansas -- both played vital roles in the Razorbacks advancing to the match-play portion of the NCAA Championships -- and are using this week's competition as a launching pad for the future.

They are both scheduled to participate in the LPGA's Northwest Arkansas Classic in Rogers in three weeks, with Benton likely turning pro before the event while Kim said she intends to retain her amateur status so she can compete in some of the big events leading up LPGA Qualifying School in late August.

"I didn't want to jump the gun before I knew what events I could play in this summer," said Kim, who is eyeing the U.S. Women's Amateur in August.

Benton said she will likely turn pro in time for the LPGA tournament at Pinnacle Country Club.

"There's no need not to," Benton said. "What if I played well and made some money."

Benton said she's going to handle her own travel arrangements during the summer as she seeks to Monday qualify into LPGA events.

"Mainly, I'm just going to do it myself," said Benton, who has a degree in finance. "If I win some, I'll figure it out."

Kim and Benton, both 22, came to Arkansas after starting their collegiate careers elsewhere -- Kim at Baylor and Benton at Nevada-Las Vegas.

Both said they are glad they transferred into Shauna Taylor's program, one that has been producing top collegiate and professional talent since Stacie Lewis starred in 2007.

"It's cool to say you're a Razorback and know you're in the same company as amazing players like that," Kim said.

Benton, an Arkansas legacy whose great-grandfather Jim was an All-American football player in the 1930s, said it's important to have fun on the golf course and to do well, not necessarily in that order.