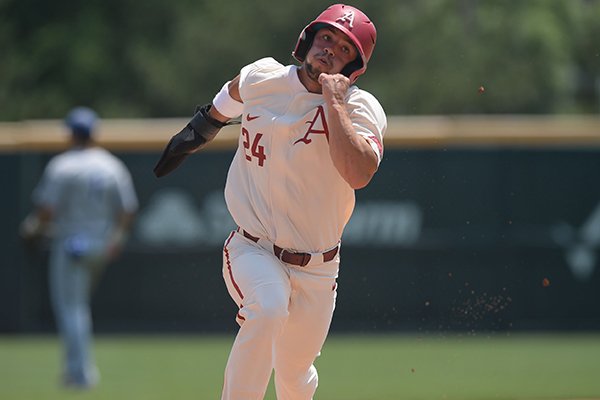 Arkansas center fielder Dominic Fletcher runs to third base on his way to the plate Friday, May 31, 2019, after a double by right fielder Heston Kjerstad during the fifth inning of the Razorbacks' 11-5 win over Central Connecticut at Baum-Walker Stadium in Fayetteville.

FAYETTEVILLE -- Imagine the NBA Draft being held during the NCAA Tournament's March Madness.

Or NFL teams drafting players on the same weekend as the College Football Playoff games.

That's what Major League Baseball does to college players.

Monday night during seven NCAA regional championship games, seven players in those games -- three from UCLA, two from Michigan and one each from Louisville and Stanford -- went in the first two rounds of the MLB Draft.

At least the seven University of Arkansas players selected had it happen after the Razorbacks won the Fayetteville Regional with a 6-0 victory over TCU on Sunday night.

"It's definitely different," said Arkansas junior pitcher Isaiah Campbell, a second-round pick by the Seattle Mariners. "We were playing a regional the day before, and then the next day I had to get my mind right for the draft. I was on the phone a lot.

"But the thing you just can't do is get your mind off track about the draft. It's all about this team during the season."

The Razorbacks' season will continue when they play Ole Miss in a super regional that opens Saturday at Baum-Walker Stadium. Whichever team wins the best 2-of-3 series will advance to the College World Series in Omaha, Neb.

"It's an individual challenge for those that are waiting or the ones that have been drafted," said Arkansas Coach Dave Horn on players not being distracted by the draft during the NCAA Tournament. "They've got to just be strong about it and stay within what we're trying to do here. That's getting to the next step.

"I think we've got some guys that are pretty mature and they're not stressed out about it. The ones that have been drafted are kind of glad it's over and it's a relief now, let's just move on.

"The timing of it isn't good and I think it could change over the next few years."

Arkansas is trying to play in the College World Series in back-to-back years for the first time.

"For me, it was one day with the draft," Campbell said. "Then after that it's back to the University of Arkansas and helping this team get back to Omaha.

"I know it's different from the NFL and the NBA. It's weird how they do it [in baseball], but you just can't think about it too much."

Campbell, who will start against Ole Miss on Saturday, waited more than five hours after the draft started to be picked by the Mariners.

"It was nerve-racking," he said.

Campbell said when he was in high school in Olathe, Kan., he worked with two of the pitching coordinators in the Seattle organization.

Arkansas junior center fielder Dominic Fletcher was drafted in the second round at No. 75 -- one spot ahead of Campbell -- by the Arizona Diamondbacks.

"I'm pretty good at controlling my emotions most of the time," Fletcher said of being drafted while the Razorbacks are preparing for a super regional. "I feel like it's obviously exciting, but you've got to finish out the rest of the season and keep your focus on the playoffs."

Arkansas backup senior catcher Zack Plunkett was picked in the 20th round by the Los Angeles Dodgers on Wednesday at No. 611 overall.

"It was really exciting and a huge sigh of relief when it was over and not having to wonder where everything was going to fall," Cronin said. "Now I can just focus on Hog baseball the next few weeks and try to bring home a championship."

Cronin watched the draft with his parents and girlfriend.

"Just a long time sitting by the phone being nervous," Cronin said. "My dad was probably the most nervous. He was pacing and on his laptop trying to keep track of who's been drafted and where I might fall based on that."

Kenley was drafted in his first season as a starter after getting just 84 at-bats as a freshman and sophomore.

"I actually found out from our group messages first," Kenley said of being picked by Detroit. "I guess the feed I was watching was a little delayed."

"Obviously, it's something I've been dreaming of forever and something that my dad also wanted really, really strongly for me as well," Kenley said. "To deliver not only for myself, but for my family was an awesome, awesome feeling."

Unlike many college players, Kostyshock wasn't drafted out of high school.

"All the years of hard work have finally paid off," Kostyshock said. "It's been a long time coming for me.

"I've been working for a moment like that since I was six years old. It was pretty surreal."

Scroggins, who is from Bentonville, redshirted in 2017 when he had to undergo elbow surgery.

"As a little kid, you always grow up and want to play major league baseball and want to get drafted," Scroggins said. "It's amazing."

Scroggins grew up rooting for the Red Sox.

"My grandma was a Yankees fan and I was a Red Sox fan, so we always butted heads back and forth," he said. "But she's happy for me."

Van Horn said he's excited for the Razorbacks who were drafted.

"They've all worked really hard," he said. "These are guys that have battled different things, whether it's injuries or waiting their turn.

"I'm just happy for these guys. They'll tell you they're excited about being drafted, but they're hooked up for this weekend."

Players with Arkansas ties who were selected in the MLB Draft: