Exposure up north paying off 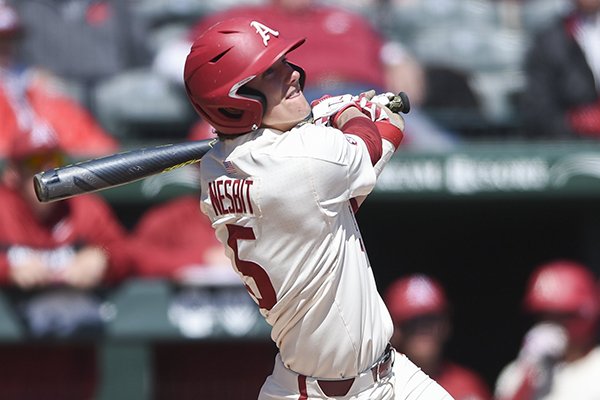 FAYETTEVILLE -- While the University of Arkansas baseball team made its run to the College World Series last season, Jacob Nesbit was making up for lost time in the Northwoods League.

Jacob Nesbit at a glance

"I'd never been that far north in my life," said Nesbit, who is from Coppell, Texas. "It was a really cool experience.

"It also forced me to grow up in a hurry. I matured a lot spending the summer up there."

Nesbit said it was tough to watch from afar as the Razorbacks won their regional and super regional in Fayetteville and reached the College World Series in Omaha, Neb., where they finished runner-up to Oregon State. But competing in the Northwoods League against other college players, he said, elevated his game.

"Obviously, I would love to have been in Omaha," Nesbit said. "But I wouldn't change a thing because playing in the Northwoods League was valuable experience for me. I'm thankful for it."

"Going there and playing every single day really changed my game -- especially my mental approach."

The No. 5-ranked Razorbacks (44-17) are making another postseason run -- they open NCAA super regional play against Ole Miss (40-25) on Saturday at Baum-Walker Stadium -- and this time Nesbit is their starting third baseman.

"He was up in the Northwoods League trying to get better so he could not only make our team this season, but have a chance to play," Arkansas Coach Dave Van Horn said. "It really worked out for him because he got a lot of at-bats every day."

Nesbit played in 66 games for Bismarck between May 29 -- three days before the Razorbacks' first NCAA regional game against Oral Roberts University -- and Aug. 13.

Starting at shortstop, Nesbit batted .266 with 2 home runs, 10 doubles, 27 runs batted in and 45 runs scored. His 248 at-bats would have placed him fifth among the Razorbacks last season.

"You've got a guy that can't make the roster and the next year he's starting on a team that wins 40 games," Van Horn said. "It's hard to predict that.

"Last year I saw him as a young player that kind of stayed the same. Then this year he's made that jump."

Nesbit has been solid defensively, Van Horn said, and he's made impressive plays with diving stops or bare-handing ground balls and throwing out runners.

"You feel comfortable when you're on the mound and he's at third base making plays," Arkansas pitcher Isaiah Campbell said.

• Driving in six runs against Tennessee

• Driving in three runs at Alabama

"He's a guy that has a knack for getting a big hit every now and then," Van Horn said.

Nesbit's average has fallen from a high of .357 his first 22 games, but he was 3 for 10 with a walk in Arkansas' three regional games.

"Jacob's one of those guys that you can never really count out," second baseman Jack Kenley said. "If you make a mistake as a pitcher, he's definitely going to hurt you."

Kenley said Nesbit is popular with his teammates and has earned their respect.

"I think I can speak for everyone in the clubhouse and just say that when you come in and you're not in an every-day role, you want to have a place on the team that's allowing you to contribute in any way possible, and that was where Jacob came in," Kenley said. "He understood his role and he went and got better in Bismarck and he came back and he was as prepared as he could ever be.

"Now he has a role that he wants to be in. I can tell you he's taken full advantage of that. He's been a phenomenal player for us on the infield and wherever he's hit in the lineup."

"Jacob's been unbelievable for us, especially with this being his first time to play," Opitz said. "He has a good energy about him. He's positive and always brings a good dugout vibe.

"Plus, he should be on the all-hair team. He has great hair."

Nesbit worked primarily at second base in preseason practice with graduate transfer Trevor Ezell continuing to recover from shoulder surgery.

Van Horn said that when it became apparent a week before the season that Ezell's shoulder injury hadn't recovered sufficiently for him to play second base on a regular basis, he made the decision to put Ezell at first base, move Kenley from third to second and play Nesbit at third.

The reasoning, Van Horn said, was he wanted Kenley's experience at a middle infield spot and Nesbit would be more comfortable on the left side because he played shortstop in high school.

"I think it's worked out perfectly," Nesbit said. "Coach Van Horn knows what he's doing. He's been doing it forever. He's the best.

"I wasn't really thinking about third base, but once he told me what he wanted to do, I was like, 'Yeah, that makes perfect sense.' "

Nesbit said it's fun to be playing in postseason games for the Razorbacks instead of watching them from Bismarck or other Northwoods League towns.

"It's been a great ride so far playing with these dudes every single day," Nesbit said. "We're just going to try and keep it going."