Time not an issue for Hogs 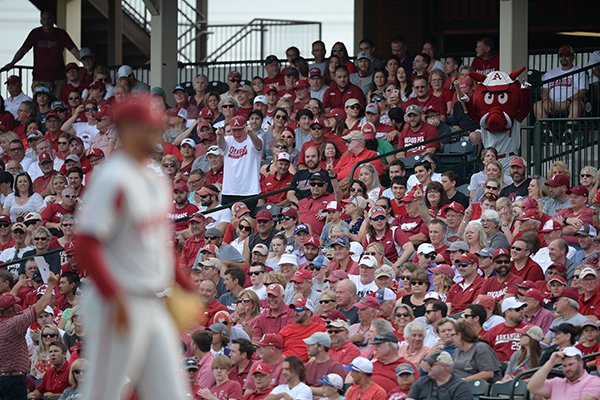 Fans are shown during an NCAA regional game between Arkansas and TCU on Saturday, June 1, 2019, in Fayetteville.

FAYETTEVILLE -- The University of Arkansas will host its first super regional game Saturday at a time 9 1/2 hours earlier than it's last NCAA playoff game.

The Razorbacks' 6-0 regional final victory over TCU on Sunday was pushed back 30 minutes to an 8:30 p.m. start after a lightning delay.

"It doesn't matter at this time of year to the players," Razorbacks Coach Dave Van Horn said. "I mean, there are 16 teams left.

Arkansas second baseman Jack Kenley was asked about the Razorbacks being left out of the prime time TV schedule, considering they play the Rebels at 2 p.m. on Sunday and, if a Game 3 is necessary, at 3 p.m. on Monday.

"Prime time is whenever we play," Kenley said with a smile.

Isaiah Campbell, the Razorbacks' starting pitcher Saturday, said he has no doubt Arkansas fans will fill the stadium.

Van Horn said having the starting times several hours apart might be an issue if the games were on back-to-back days but not when they're separated by a week.

"We have time to build up for this, as does Ole Miss," Van Horn said. "You just prepare for it mentally and get your guys up a little earlier and get acclimated and go at it."

Ezell, of Bryant, carries a 4.0 cumulative GPA as a graduate student in operations management after receiving his bachelor's degree in industrial engineering from Southeast Missouri State.

He is the second Arkansas athlete to earn the distinction, following track and field athlete Andriena Byrd during the 2001-02 season.

Ezell also earned first-team academic All-America honors to become the first Razorback to earn the distinction since 2010 and the third player in program history, following Allen Williams (1992) and Zack Cox (2010).

Ole Miss scored 41 runs in three games, a program record for a regional, to win the NCAA Oxford Regional last week. The Rebels averaged 13.7 runs and three home runs per game in two victories over Jacksonville (Ala.) State by the scores of 16-2 and 19-4 and a 6-1 victory over Clemson to claim their first regional since 2014.

The Rebels led the nation with a .404 batting average, a .675 slugging percentage and the 13.7 runs per game during regional play.

Bianco has a record of 750-437-1 in his 19th season with the Rebels, and an overall record of 850-508-1. He is the winningest and the longest-serving active coach in the SEC in the big three sports of football, basketball and baseball.

Former Razorback pitcher Jackson Rutledge, a freshman with the Hogs in 2018, was the 17th pick of the MLB Amateur Draft by the Washington Nationals after a big season for San Jacinto (Texas) Junior College.

Rutledge transferred to San Jacinto after struggling with his command at Arkansas, where he had a 3-0 record and 3.45 ERA in 152/3 innings with 14 strikeouts, 11 walks and 5 wild pitches.

"It's a different path for different players," Van Horn said. "I think that Jackson made a good decision. San Jac ended up being a great place for him. I want every kid to do well.

"I'm just happy he's going to have the opportunity to sign for a good amount of money and get to play pro ball. I'm sure he'll be in the big leagues in the next three to four years."

Senior Zack Plunkett has been a backup catcher at Arkansas for two seasons after also catching at TCU. The Los Angeles Dodgers drafted him the 20th round on Wednesday as a pitcher.

It's probably not a typo.

Plunkett has pitched in some scrimmages at Arkansas, Coach Dave Van Horn said, and his fastball hit 96 miles per hour.

Van Horn said before the SEC Tournament that it's possible Plunkett could pitch an inning in relief if necessary.

Ole Miss left-hander Zack Phillips of Texarkana was a 27th round pick in this week's MLB Draft by the Kansas City Royals.

Phillips is not slated to start in the super regional against Arkansas, but he's had a couple of outings against them this season.

Phillips started and lost a 5-3 decision against the Hogs and Patrick Wicklander at the SEC Tournament on May 22. He fell to 4-3 after allowed 4 runs on 4 hits and 2 walks, with 3 strikeouts and a wild pitch in 52/3 innings that day.

Phillips picked up the victory in a 10-5 Ole Miss victory at Baum-Walker Stadium on March 31 as the Rebels clinched the regular-season series.

Clay Matvick and Todd Walker, who have both called Arkansas home games this year, will have the ESPN call for this weekend's super regional. Matvick worked Games 1 and 3 of the Razorbacks' three-game sweep of Mississippi State, while Walker called the finale of the Razorbacks' sweep of Tennessee.

Saturday's game is scheduled for an 11 a.m. start on ESPN, while Sunday's 2 p.m. game is set for ESPNU. If Game 3 is needed, it is tentatively set for a 3 p.m. first pitch on ESPN2.