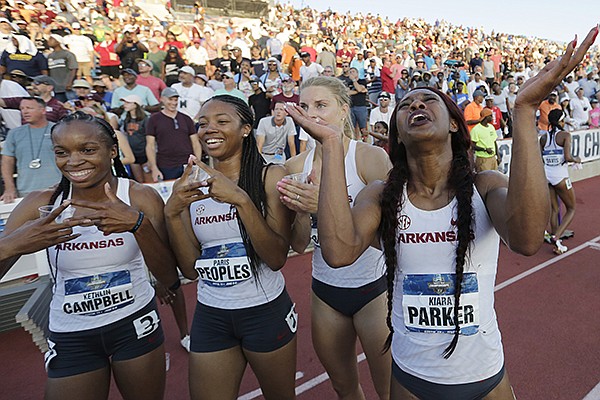 Arkansas is national champion again after a wild finish at the 2019 NCAA Women's Outdoor Track and Field Championships in Austin, Texas.

The Razorbacks edged Southern Cal in the team standings, 64-57, after the Trojans dropped a baton on the third leg of the final race, the 1,600-meter relay.

Arkansas and USC were tied with 56 points apiece entering the relay.

The Razorbacks won their fourth national championship since 2015 and second this year. Arkansas won the NCAA indoor meet in March.

USC’s Anna Cockrell tripped up coming around the final turn of her leg and dropped the baton. The Trojans were leading the Razorbacks in the race at the time, although Arkansas’ Payton Chadwick was closing in on Cockrell from the outside.

Arkansas’ team of Paris Peoples, Kiara Parker, Chadwick and Kethlin Campbell finished second behind Texas A&M in the relay with a time of 3:25.89. The Trojans finished eighth.

USC, which was the reigning NCAA outdoor team champion, had the nation’s third-fastest time in the 1,600-meter relay coming into the night, nearly one second better than Arkansas’ fastest time.

"This was a 100 percent team effort that came right down to the mile relay," Arkansas coach Lance Harter said. "USC, they were on a roll. We just told our mile relay, 'You've just got to get the stick around,' and fortunately we were able to do that.

"Anytime you can win a national title, that's a special moment no matter how many you accumulate."

The Razorbacks pulled even with USC in the team standings when Taylor Werner finished the 5,000 meters with a second-place time of 15:51.24. Werner was leading the race in the final lap, but was passed by Colorado’s Dani Jones down the stretch.

Brown's 100 hurdles time of 12.4 seconds was the second-fastest in meet history and ahead of Chanel Brissett's second-place time of 12.52 for USC.

Brown, who finished fourth in the 200 meters with a time of 22.4 seconds and was part of the Razorbacks’ third-place 400-meter relay team, was Arkansas’ highest individual scorer with 16.5 points.

"We brought the largest squad here and they rose to the challenge," Harter said. "Some people had an off day, but others filled the void. Cumulatively, that was a total team effort."