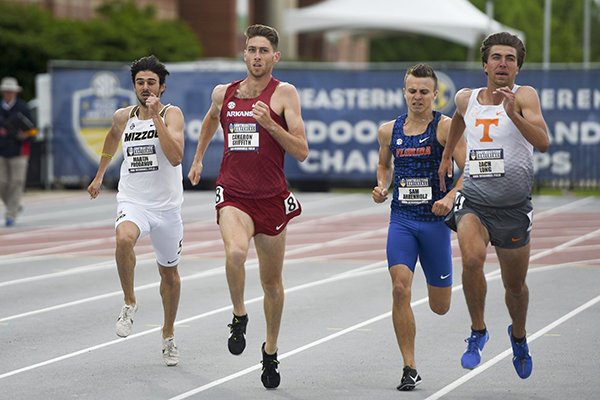 Arkansas' Cameron Griffith runs the men's 1,500-meter run during the SEC Track and Field Championships on Friday, May 10, 2019, at John McDonnell Field in Fayetteville.

AUSTIN, Texas -- Cameron Griffith knew he had everything under control.

His family, friends and even his coach wouldn't agree.

In the men's 1,500-meter run, the University of Arkansas senior surged from 10th place to finish third during the NCAA Track and Field Championships on Friday at Mike A. Myers Stadium. Griffith outkicked the majority of his competition over the final 200 meters, finishing in 3 minutes, 42.14 seconds.

"He doesn't like the stress," Griffith said of men's track and field Coach Chris Bucknam. "Neither does my mom. Neither does anyone who watches me race. Honestly, I think it's the best way that I can race well."

Griffith, who is from Sydney, Australia, hung back in a tightly packed field of 12 for the first three laps. He made his move around the same time race-winner Yared Nuguse (Notre Dame) and Justine Kiprotich (Michigan State) were starting to create some separation up front.

"I knew I was in good shape, but you never know," Griffith said. "It depends how people come back from the heat and so many different situations. I was really pleased."

All eyes were on the photo finish between Nuguse and Kiprotich, who were separated by just three-thousandths of a second. Nuguse finished in 3:41.381. Behind them, Griffith passed Wisconsin junior Oliver Hoare, who was his high school classmate at Trinity Grammar School in Australia. Griffith said it was his first head-to-head victory over Hoare in college.

Despite bringing only nine individuals and two relay teams, the Arkansas men finished tied for 15th as a team with 19 points. Texas Tech scored 60 points to win its first men's title. Florida finished second with 50 points.

In the men's 400 relay, Arkansas claimed fourth with a time of 38.58 seconds. Josh Oglesby, Kristoffer Hari, Tre'Bien Gilbert and Roy Ejiakuekwu lowered their season best from Wednesday by 0.032. They were 0.011 seconds off the school record.

"I was thrilled when I got the stick," Ejiakuekwu, the anchor, said. "I just had to execute and hold on."

Ahead of them, Florida broke the collegiate record with a time of 37.97. LSU, which beat the Razorbacks in the prelims, missed a handoff and didn't finish.

"With a great field like that, we knew we had to come out there and run a heck of a race," said Gilbert, a freshman who ran the third leg. "We put all our trust into each other. We just put this team together not too long ago and ran a season best at the biggest stage."

Three-fourths of the relay -- Gilbert, freshman Oglesby and sophomore Hari -- will be back next year. Hari replaced freshman Rashad Boyd on Wednesday as Boyd ran the 200 and missed qualifying for the final.

The four-day meet has been building to a crescendo for the Razorbacks, who are one of the favorites to win the women's team championship. Heading into today, they are tied for the lead with Stanford at 15 points each. Projections show USC and Arkansas as the favorites for the women's title, and it could come down to the final race -- the 1,600-meter relay.

"This is a game of averages at this meet, especially with the number of bodies we have," Arkansas women's Coach Lance Harter said. "If somebody has an off day, is there somebody else that'll rise up and fill that void?"

The Razorbacks are ranked No. 1 in the coaches' poll and won the indoor championship in March. Harter is chasing his fourth championship in his 30th season. Arkansas last won outdoor in 2016.

The 100 hurdles and both relays will feature head-to-head competition between the Trojans and Razorbacks.