Hoggard steps up after twin stumbles 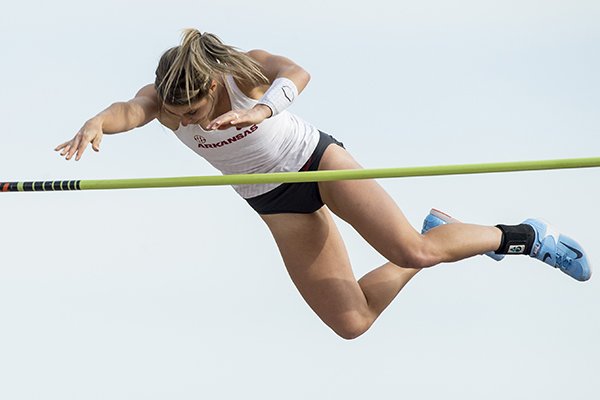 Tori Hoggard of Arkansas clears the bar at 14 feet 6 1/4 inches Friday, April 12, 2019, during the women's pole vault at the John McDonnell Invitational at John McDonnell field in Fayetteville. Hoggard won the event.

Jacobus, a four-time national champion in the pole vault for Arkansas, made an early exit in the finals of the NCAA Track and Field Championships on Thursday at Mike A. Myers Stadium. Hoggard met her halfway down the runway. Her career ended in ninth place at 13 feet, 9¼ inches.

"You've had an amazing career," Hoggard told her sister. "Don't let this one meet define it."

Then Hoggard returned to the competition, ready to leave her own legacy. At exactly 11:30 p.m., she cleared the bar at 14-11½ to secure her first national title.

"It was just a flow of emotions," she said. "I've been waiting for this opportunity for so long. Obviously, I've seen Lexi do it four times, and I was really excited to finally get my chance."

The 22-year-old twins from Cabot have been among the NCAA elite since arriving in Fayetteville, finishing 1-2 at SEC meets five times, with Jacobus almost always on top. She's the one who went to the 2016 Olympics in Brazil, and she ranks fourth on the all-time collegiate list outdoors at 15-3.

"I want to say no, but I mean, of course," Hoggard said when asked whether it was difficult waiting her turn. "We're twin sisters, and I expect myself to be right there with her. She's always just been a little bit ahead of me, but that's honestly encouraged me. She's always set the bar so high to strive for since we started pole vaulting."

The vault that won the title was also Hoggard's personal best outdoors, allowing her to outlast runner-up Bonnie Draxler of San Diego State. After coming in at 13-9¼, Hoggard easily cleared the first three bars. She used her second attempt to get past 14-9½ and 14-11½. When it became clear she had won, the twins came together for another hug and both shed tears of joy.

Jacobus knew she'd be fighting an uphill battle. A back injury had plagued her since indoor nationals in March, and she started feeling pain in her Achilles tendon last week, which limited her explosiveness.

Teammate Desiree Freier joined Jacobus in a tie for ninth place after both failed to clear 14-3¼.

"Leading up to [Thursday], I told [Tori] it was her chance," Jacobus said. "It was her meet to go get it. I couldn't be happier for her."

Hoggard took three cracks at 15-3, which would have put her even with Jacobus on the all-time college list.

Over four years, the two combined for five national championships and 13 All-America honors.

"It has been such an honor to represent the Razorbacks, represent the state of Arkansas -- what we call home," Jacobus said. "And even representing our city of Cabot, they've always been cheering for us from afar in central Arkansas. If I could do it all over again, I would do the exact same thing."

The twins excelled in the classroom as well, both graduating with 4.0 grade-point averages and plans to become pharmacists. They'll take a year off from school to concentrate on qualifying for the 2020 Olympics in Tokyo. Up next is the USATF Outdoor Championships next month in Des Moines, Iowa, for which they've both qualified.

As they embark on the next chapter, Hoggard will take an extra boost of confidence from conquering the national stage.

"I didn't get to go to the last Olympic Trials (in 2016), so I guess that's the first goal," she said. "The U.S. is so competitive, but yeah, the ultimate goal is to make an Olympic team."