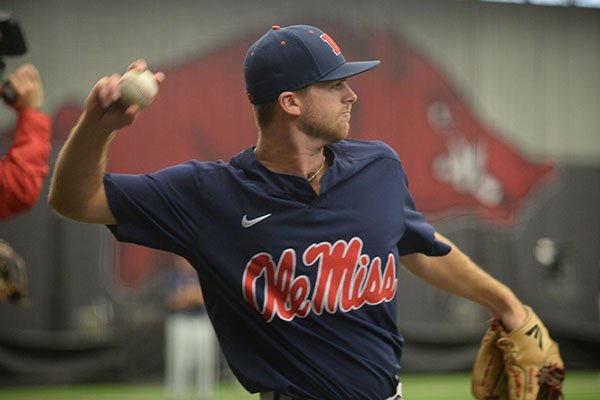 Ole Miss has even won its past two series at Arkansas.

When the Rebels took two of three games at Baum-Walker Stadium this season, they were the first visiting team to win a series at Arkansas since Ole Miss did it in 2017.

Over the past three seasons, the Razorbacks are 95-18 at home, but 2-4 against the Rebels.

It's a trend No. 5-ranked Arkansas (44-17) must reverse when it plays No. 18 Ole Miss (40-25) in an NCAA super regional this weekend if the Razorbacks are to advance to the College World Series for the second consecutive year.

Arkansas and Ole Miss play at 11 a.m. today at Baum-Walker Stadium and at 2 p.m. Sunday. If a third game is necessary, it will be played at 3 p.m. Monday.

"We love playing here, and they love coming to this place," Arkansas sophomore catcher Casey Opitz said. "You can kind of tell. When they come here, they're not too afraid. It's kind of put your face in the dirt and let's go at it. It's going to be war."

The Rebels are 3-2 against the Razorbacks this season, including the teams splitting two games at the SEC Tournament in Hoover, Ala. Arkansas beat Ole Miss 5-3, then the Rebels beat the Razorbacks 3-2 to eliminate them.

During the regular season, Arkansas beat Ole Miss 5-3 behind a strong performance from starting pitcher Isaiah Campbell, but the Rebels came back to win 4-3 and 10-5.

"I guess it's just another SEC weekend pretty much," Campbell said of the Rebels playing at Arkansas again. "We had 10 in the regular season, and we get an 11th one."

Ole second baseman Jacob Adams, a senior from Conway, said the Rebels are looking forward to playing at Baum-Walker Stadium.

"We have a lot of confidence coming here," Adams said. "We've had success against these guys in the past. But obviously they're always a good club. It's fun to play against them."

"They've done really well against us," Van Horn said. "So I'm sure it does give them confidence.

"If we do what we can do, then we have a chance to win the series."

"We know we're capable of beating them," Fletcher said. "They have a good team, but so do we."

Arkansas beat LSU two of three games at Baum-Walker Stadium this season to win a series against the Tigers for the first time since 2011.

"LSU supposedly had our number up until they came and played us this year," Razorbacks designated hitter Matt Goodheart said. "So I feel like we can turn that around [against Ole Miss] for the better."

Ole Miss junior first baseman Cole Zabowski said the Rebels' familiarity with playing at Arkansas is a plus.

"There's not really going to be that time to get used to the field and the stadium and everything. We know what we're getting into."

"I don't think it plays much into it," Bianco said. "The biggest thing is that we've played them going in. It's not like you're searching for scouting reports or video. I think both teams probably have a pretty good idea of what the other team has."

Ole Miss went 1-6 to close the regular season, but the Rebels are 7-2 in the postseason, including 4-2 in the SEC Tournament where they lost to Vanderbilt 11-10 in the championship game, and 3-0 in their regional at home last week when they beat Jacksonville State 16-2, Clemson 6-1 and Jacksonville State 19-4.

"I think this team is playing really well right now, and it's a great time to be playing well," Ole Miss junior shortstop Grae Kessinger said. "We just want to keep doing it this weekend."

Rebels junior right-hander Will Ethridge (7-6, 2.91 ERA) will start against Campbell today as he did in the teams' regular-season opener when he went 5 innings and allowed 4 earned runs, 7 hits and 2 walks with 4 strikeouts.

"They're experienced," Campbell said of the Rebels' lineup. "Just top to bottom, they're really tough outs.

"You have pitch them really well. You can't do the same thing two times in a row to them. You have to sequence them differently."

Campbell said Arkansas pitching coach Matt Hobbs has done extensive scouting on the Rebels since the Razorbacks last played them in the SEC Tournament.

"Me and coach Hobbs will have a really good plan," Campbell said. "After that, it just comes down to executing it."

Ethridge understands he probably won't have much margin for error going against Campbell.

"He's a competitor. He's a really good pitcher," Ethridge said. "We really just have to compete. We might be able to win the ballgame 1-0 or 2-1. It's just going to be who can put up the most zeroes between us two."