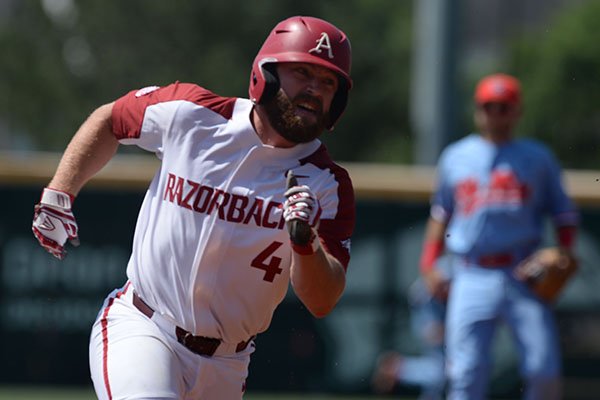 Arkansas first baseman Trevor Ezell runs toward third base during the first inning of an NCAA super regional game against Ole Miss on Saturday, June 8, 2019, in Fayetteville.

The switch hitter fell behind Ole Miss right-hander Will Ethridge, fouled off a couple of pitches and worked a full count before lashing an opposite-field double over third baseman Tyler Keenan on an eight-pitch at-bat.

Ezell scored the tying run on a Dominic Fletcher single minutes later to get the Razorbacks' offense up and running with a four-run first.

"That was big for us right there after giving up a run in the first," Arkansas Coach Dave Van Horn said. "For us to come in and to score, I think that was big. It kind of slowed it down a little bit."

Ezell, a senior from Bryant, went 3 for 5 with 2 doubles, a home run and 3 runs scored as the table setter in the Razorbacks' 11-2 rout of Ole Miss in Game 1 of the NCAA Fayetteville Super Regional.

"I saw the ball well and was able to put some good swings on it," Ezell said. "I really saw a lot of pitches, especially my first few at-bats. Any time you can do that as a hitter, you're going to be better off."

Ezell had been 2 for 16 against Ole Miss pitching entering the game. He said the Razorbacks looked at the approaches the Ole Miss pitchers took against them in five previous games and made slight adjustments, particularly on inside pitches.

"We studied that the last couple of days, studied the pitchers," Ezell said. "We just refreshed on kind of how they've attacked us in the past and tried to make those adjustments today.

"Fortunately we were able to take a bunch of pitches that were marginal that we couldn't do anything with and put balls into play when they were in the zone."

Ole Miss Coach Mike Bianco credited Ezell and Casey Martin for triggering the Hogs' four-run outburst in the first. Martin followed Ezell's double with a solid shot through the six-hole and into left field to move Ezell to third base.

"First you watch that first inning, two great at-bats by Ezell and Martin to start the game," Bianco said. "Ezell runs a full count and pops a double down the left-field line, and then Martin with two strikes gets to Will's fastball in, which not a lot of guys do, and pulls a base hit.

"I think they've made adjustments. Much has been said that we played them five times. We pitched them similar, but today they made some adjustments on some balls in. I thought they really had a good approach offensively."

Ezell's day was far from done after keying the first inning. After Christian Franklin reached on an error to open the second inning, the first baseman drove a 2-2 offering -- after fouling off a couple of additional pitches -- into the gap in right-center field. Franklin did not get a good read on the depth of the shot, preventing him from scoring.

Both runners would cross home in the inning on Martin's sacrifice fly and Matt Goodheart's RBI groundout to make it 6-1.

Ezell barreled up another ball in the fourth inning but lined out to center fielder Ryan Olenek.

He led off the Arkansas sixth with a home run to right-center field off of Tyler Myers to give the Razorbacks a 10-1 lead.

Ezell almost homered again on his last at-bat, sending the 6-5 Olenek to the wall in center field, where he committed home-run robbery a couple of feet over the wall.

"He made an incredible play," Ezell said. "You tip your cap to him. He did everything he could out there and came up with it."

Ezell, who went undrafted in last week's MLB Draft, said the rest of the season is not about him.

"I've got one thing on my mind at this point, so that doesn't really come into play for me," he said.