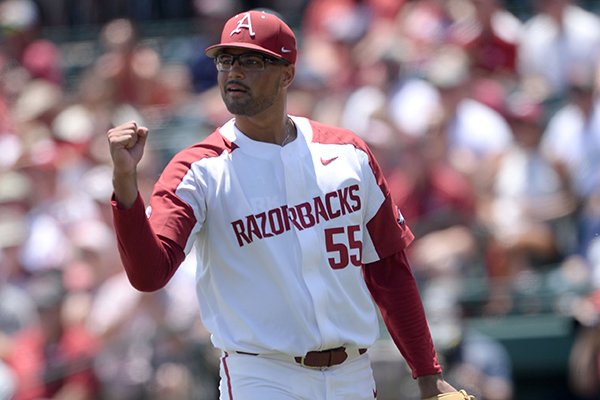 FAYETTEVILLE -- University of Arkansas pitcher Isaiah Campbell overpowered Ole Miss on Saturday, and so did the Razorbacks' offense.

Campbell, a junior right-hander, went a career-long 81/3 innings and got plenty of support -- including home runs by Jack Kenley, Matt Goodheart and Trevor Ezell -- as No. 5-ranked Arkansas beat No. 18 Ole Miss 11-2 in the opening game of the NCAA Fayetteville Super Regional before an announced crowd of 10,821 at Baum-Walker Stadium.

"Just a tremendous game by them," Rebels Coach Mike Bianco said. "Campbell was terrific today. Offensively, they were terrific."

"One of the things we talked about with our team is when you get to this point, everybody is really good and it comes down to playing well -- and boy, did they play well today. Unfortunately, we were the opposite."

If the Razorbacks (45-17) beat the Rebels (40-26) in today's 2 p.m. game, Arkansas will advance to the College World Series for the second consecutive year. If Ole Miss wins, the Rebels will force a winner-take-all third game at 3 p.m Monday.

"It feels like we haven't really done anything," Razorbacks Coach Dave Van Horn said. "It's nice winning games, but I've been on both sides of it -- coming back and winning [super regionals] and not finishing them out.

"So same as always. Go home, take a shower, eat, hang out, watch some baseball, and get up and do it again."

Ole Miss shorstop Grae Kessinger hit a 2-0 fastball from Campbell for a home run in the first inning to give the Rebels a 1-0 lead.

"Yeah, got the one in the first inning, but he's really good," Kessinger said. "We knew every pitch we were going to have to battle. Just because I got one out of the yard wasn't going to mean he was going to give in. From then on, he just kept making pitches.

Campbell (12-1) didn't allow another run until the ninth inning when Thomas Dillard hit a home run leading off.

"It didn't faze me at all," Campbell said of Kessinger's home run in the first. "I just took a deep breath, got back in the strike zone and just kept taking one pitch at a time."

Campbell said nothing changed about his approach.

"In all honesty, I made a pretty good pitch inside that got in on his hands," he said. "He works out and is a strong kid and a really good batter. He got enough on it and got it out."

The Razorbacks responded with four runs in the bottom of the first inning. Ezell hit a leadoff double and moved to third on Casey Martin's single. Dominic Fletcher singled on a bouncer over the first baseman to drive in Ezell and send Martin to third. Kenley capped the scoring with a two-out, three-run home run.

"They just swung it well," said Ole Miss starter Will Ethridge, who allowed 8 runs, 6 earned, in 31/3 innings. "They hit each pitch that I had very well.

"I wasn't able to locate my pitches very well. Just not my day today, and they took advantage of it."

Arkansas made it 6-1 in the second inning. Franklin reached on an error by Kessinger, went to third on Ezell's double and scored on Martin's sacrifice fly. Ezell scored on Goodheart's groundout.

"It's huge getting run support," Campbell said. "When you get run support, all I have to do is just go out there and throw strikes."

Campbell beat Ole Miss for the second time this season. He went seven innings when the Razorbacks beat the Rebels 5-3 on March 29.

"Yeah, he's real good," Bianco said. "Power arms are going to give up some home runs ... especially in this ballpark. What a great competitor and a true ace he really is.

"Grae hits a home run, then he strikes out [Tyler] Keenan the next at-bat, and we really don't threaten the rest of the game."

Arkansas scored three runs in the fourth inning to push its lead to 9-1.

Ethridge hit Franklin leading off, then balked him to second. After Martin singled in Franklin to knock Ethridge out of the game, Goodheart greeted Ole Miss reliever Tyler Myers with a two-run home run.

Ezell led off the sixth inning with a home run, and the Razorbacks scored on Casey Opitz's bases-loaded walk later in the inning to make it 11-1.

"It was a good job by everybody up and down the lineup," Van Horn said. "It wasn't just the top. It was the whole lineup."

Arkansas' 11 hits were more than the Razorbacks had in two games combined against Ole Miss in the SEC Tournament when they had five each in beating the Rebels 5-3 and losing to them 3-2.

"It's being back here and being well-rested and making some adjustments," Van Horn said. "I think you just learn from the past a little bit. I think that's what they're doing."

After Arkansas beat Ole Miss in the teams' regular-season series opener, the Rebels came back to win the next two games.

"I think this team plays well with their backs against the wall," Kessinger said. "You look at the SEC Tournament [where the Rebels won four elimination games before losing to Vanderbilt in the championship game] and what we did the last time we were here.

"This team just steps up to the challenge. We pick each other up."

Campbell threw 102 pitches -- including 67 for strikes -- and lowered his ERA to 2.26. He held the Rebels to 5 hits and 1 walk with 7 strikeouts and exited to a standing ovation before Marshall Denton got the final two outs.

"Obviously, Isaiah was really good today just locating and working ahead," Van Horn. "He gave up a solo homer to the second hitter of the game and it didn't faze him.

"He did a great job of getting out of that inning. He kept the same demeanor, went with the same approach and kept attacking. We scored some runs ... gave him a chance to catch his breath and pitch. And, that's what he did."