SS Martin finds self at plate 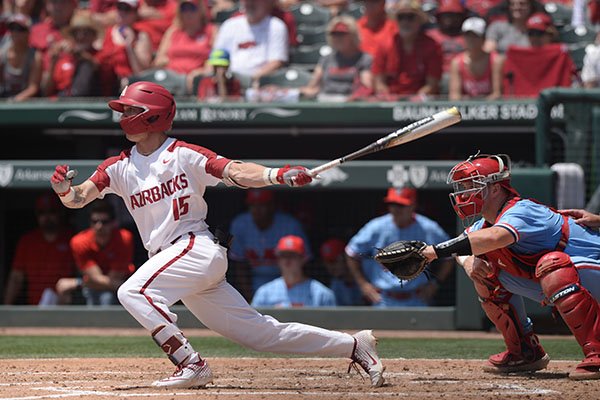 FAYETTEVILLE -- University of Arkansas shortstop Casey Martin said he was in a much better place entering the NCAA Fayetteville Super Regional against Ole Miss than he had been for most of the 0-for-20 skid he snapped with a single in last Sunday's 6-0 regional championship victory over TCU.

Martin proved it Saturday with a hard-hit single to left field in his first at-bat as part of the Hogs' four-run first inning in an 11-2 rout of the Rebels.

"I think I hit on this the other day whenever I talked about him," Arkansas first baseman Trevor Ezell said. "But it was just a matter of time before he breaks out. He's such a good hitter and such a good player. You can't keep him down for too long. So we were expecting him to come out and have good at-bats today."

Martin hit a sacrifice fly in the second inning and added a run-scoring single in the fourth inning as the Razorbacks expanded their lead to 9-1.

Arkansas right-hander Connor Noland will take the hill for today's Game 2 at 2 p.m. in an all-freshman matchup.

Noland also got a no-decision in the March 30 game, which he left with a 3-2 lead in the fifth. He got a no-decision after allowing 1 run on 2 hits in 5 innings and leaving with a 2-1 lead in a 3-2 loss to the Rebels on May 24 at the SEC Tournament.

Noland won Arkansas' 11-5 victory over Central Connecticut State on May 31, while Wicklander won a 6-0 decision over TCU two days later.

Arkansas starter Isaiah Campbell got out of mild jams in the third and fourth innings via vastly different double plays.

With Thomas Dillard aboard and one out in the third, Campbell struck out Grae Kessinger looking as Dillard broke for second. Shortstop Casey Martin was waiting with the ball at second base for an easy tag of Dillard after catcher Casey Opitz fired a laser to the bag.

Tyler Keenan hit a leadoff single in the fourth and was there with one out when Ryan Olenek hit a hot grounder to Martin's left. The play took Martin toward the bag, and he flipped a backhand ball to Jack Kenley for the turn on the tailor-made twin killing.

"They help you out a lot," Campbell said. "They're momentum boosters. They get the momentum on your side. They're pitch savers, too.

Arkansas pitcher Isaiah Campbell twice referred to his head coach as "Van Horn" before correcting himself during post-game interviews Saturday.

Each time, Dave Van Horn just went with the flow and chuckled.

Later Van Horn was asked when players can drop the "coach" when referencing him.

"They keep winning, they can call me whatever they want," Van Horn said. "I really don't care. I'm sure they call me a lot of things when I'm not around, but I'm good with that, too.

"No, those guys are great. It's just guys being guys. I'm Coach Van Horn usually when we're together, but when there's just talk, it's Van Horn, it's whoever."

Ole Miss scored first and last in Game 1 on Saturday, but the Razorbacks piled up 11 runs in between to pound the Rebels 11-2.

Shortstop Grae Kessinger homered in the first inning to give the Rebels an early lead, then left fielder Thomas Dillard drove a pitch over the left-field wall to close out the scoring against Isaiah Campbell in the ninth inning.

Ole Miss center fielder Ryan Olenek got a big jump and full extension at the wall in center field to snare a smash from Trevor Ezell that was headed over the wall for what would have been his second home run of the game.

"He's 6-5 with a pretty good vertical, and he is a super athlete," Ole Miss Coach Mike Bianco said. "It was 400-plus feet away and it probably looks even better on TV. Just a tremendous, tremendous play from a really good athlete."

The Razorbacks fouled off 15 pitches against Ole Miss starter Will Ethridge en route to a four-run first inning in which he threw 45 times.

"I think they hit each pitch I had very well," Ethridge said. "I wasn't able to locate my pitches very well, and they were able to take advantage of it."

Arkansas Coach Dave Van Horn enjoys throwing batting practice, and he's still at it in his 31st year as a head coach.

He clearly was having fun with it during Friday's practice inside Walker Pavilion.

His arm doesn't give him trouble after the sessions, but there are repercussions.

"Other parts of the body start hurting, usually the hip and knee or something," he said.

Three Ole Miss infielders collided and two of them went down on a Casey Martin popup in the sixth inning.

First baseman Cole Zabowski made the catch on the sky-high pop, and his right elbow caught shortstop Grae Kessinger on the side of the head as that duo ran into second baseman Jacob Adams. Kessinger caught the worst of the collision as he and Zabowski went down, and the 5-10 Adams stayed on his feet.

"I feel fine," Kessinger said. "It just kind of took my breath away for a second."

Ole Miss left-handed reliever Kaleb Hill was pitching in front of family members when he came on in the sixth inning. Hill, a 6-3 freshman, was a three-sport standout at Watson Chapel in baseball, football and basketball.

The son of Tara Ward was a 39th-round selection by the Cleveland Indians who chose to stick with his Rebels' commitment.