By: John Harris Special to the Democrat-Gazette
Published: Sunday, June 9, 2019 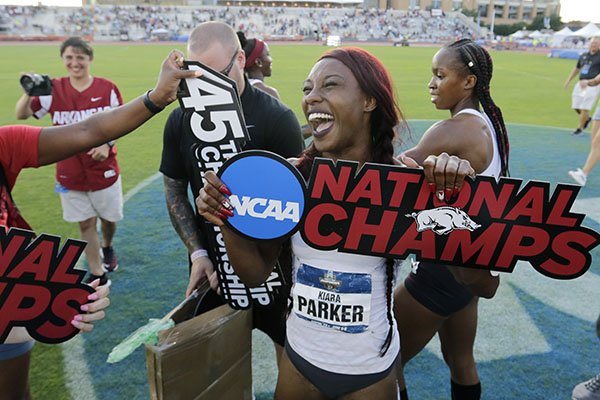 AUSTIN, Texas -- The University of Arkansas women's track and field team trailed first place and defending national champion Southern California by eight points with only two events remaining on the final day of the NCAA Track and Field Championships on Saturday.

To capture their second Outdoors national title in four years, the Razorbacks needed to outpoint USC in the 5,000 meters and 1,600 relay.

That's a sizable disadvantage to overcome for most teams, but these Razorbacks are battle-tested, having survived the rugged SEC.

When sophomore Taylor Werner ran the race of her life to finish second in the 5,000 to earn eight points and tie USC at 56-56 for first place, the Razorbacks had their opening. USC then swung the door wide open in the final event.

The Razorbacks finished second in the 1,600 relay, and the Trojans dropped the baton as Arkansas bested USC 64-57 at Mark A. Myers Stadium.

"It's part of our culture that we have initiated over the years," UA women's Coach Lance Harter said. "It's a legacy that we have been able to establish. The old ones teach the young ones what the expectations are."

Arkansas was joined by three other SEC members among the top-six finalists. LSU (43) was third, Texas A&M fourth (38) and Florida sixth (32). Oregon finished fifth with 34 points.

"Being members of the SEC, you get tested by fire in cross country, indoor and outdoor," Harter said. "There's never an opportunity to just relax and cruise through. I think that had a lot of benefit for our upperclassmen this year. When an opportunity does happen for a program like ours, we want to try to seize the moment and be as gracious as we can and hope that each and every athlete has a great experience."

"National champion, I can't even say what that means to me. Amazing," senior Payton Chadwick said.

Chadwick ran the third leg of the 1,600 relay in which USC's Anna Cockrell stumbled and dropped the baton, enabling the Razorbacks to move up as USC finished last to drop out of national championship contention.

"It was close," said Chadwick, who was behind Cockrell entering the stretch when the baton bumble occurred. "The whole time, coach was saying it's going to come down to the 4x400. And our 5,000 girl [Werner] got second. She walked off crying because she knew she left it all out there. We were all like, 'We've got to give it our all,' and that's what we did."

Harter broke down his relay team's performance in the deciding race.

"We led off with our freshman [Paris Peoples], and she just kept us in the hunt," he said. "Kiara Parker, our 100 runner, probably ran one of the best races of her life all the way around the track. Payton Chadwick, the big, blond powerhouse, ran a fantastic leg and avoided the collision. She was able to get us free and clear. And our anchor [sophomore Kethlin Campbell] just rose to the challenge to make sure we finished well."

Chadwick was on the outside as Cockrell stepped on the heel of the runner in front of her, causing her to lose her balance and, eventually, the baton.

"It gave me an adrenaline burst," Chadwick said of seeing the chaos in front of her. "It was like, 'Oh, my goodness. We have a chance.'

"I was behind it, so I saw the mix-up, so I quickly moved outside. I had to run extra to avoid the collision. I hit it so we could get in good position."

Chadwick handed off to Campbell, who finished Arkansas' second-place finish in the 1,600 relay in 3:25.89 behind Texas A&M. It was the second-fastest 1,600 relay time in UA history.

Campbell also finished fourth in the 400; Parker, a senior, finished fifth in the 100; and junior Devin Clark finished seventh in the 3,000 steeplechase.