Bianco: Arkansas looks like a team that could win it all 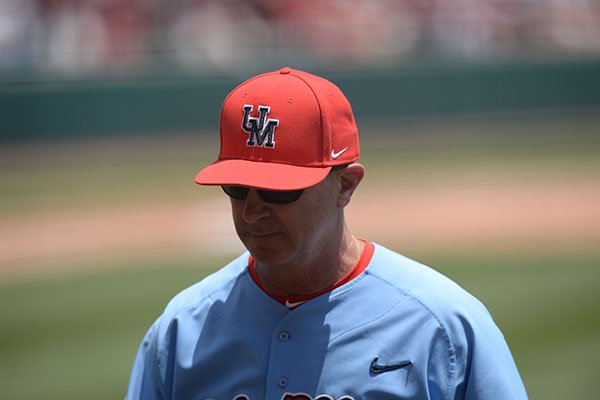 Ole Miss coach Mike Bianco walks toward the dugout during an NCAA super regional game against Arkansas on Saturday, June 8, 2019, in Fayetteville.

FAYETTEVILLE — When Ole Miss coach Mike Bianco looks back on his team’s inconsistent season, he’ll do so with a smile after coming one win away from the College World Series.

He also thinks his team was eliminated by an Arkansas team that just might win it all.

The Razorbacks (46-18) scored four runs in the opening inning and never looked back in a 14-1 thrashing of the Rebels (41-27) to capture the deciding Game 3 of the NCAA Fayetteville Super Regional.

“Obviously a disappointing ending for us but I’m proud of our guys,” Bianco said. “ Three weeks ago nobody thought we would be here and but we hung together and we got one game away from making it to Omaha.

“Unfortunately we had to come here and play the team that maybe will win the national championship and certainly one of the best teams in the country and in an unbelievable environment.”

Arkansas pounded out 12 hits and got yeomen’s work from reliever Cody Scroggins, who pitched 4 1/3 innings of scoreless relief while the Razorbacks put together five big innings.

“Obviously today it was all Arkansas in every phase of the game,” Bianco said. “Scroggins out of the bullpen was tremendous and really gave them a lift and we just couldn’t figure him out. It was just their day and they were really good today. I’m certain they will do really well next week in Omaha.”

The College World Series format has games spread out over two weeks, which allows teams more time to rest pitchers, which Bianco said could help the Razorbacks.

It will be the eighth time that Arkansas coach Dave Van Horn has taken a team to the College World Series - six at Arkansas and two at Nebraska.

“Dave is one of the all-time greats, not just presently, but you watch what he has done at two different schools and all the success that Dave has had and its amazing,” Bianco said.

“As far as his team this year, they seem to have all the parts. Especially where it is in Omaha and you don’t need the starting pitching depth that you do in other types of tournaments.

“Of course with (Arkansas ace Isaiah) Campbell on the mound it is hard to think they would not be the favorites with that offense. They play solid defense, they run the bases.”

Bianco, whose team took two of three in Fayetteville in March and had won four of seven meetings with the Razorback this season, believes Arkansas’ bullpen is improved from earlier in the year.

“The bullpen is much better and improved,” Bianco said. “When we were here in March and seeing the SEC Tournament and this weekend, it has always gotten better. (Arkansas closer Matt) Cronin has always been great, but the other pieces are better now than there were in March and I think they have all the parts to have a lot of success in Omaha.”

“They are running guys out there that can all hit 95 (mph) and above,” Dillard said. “And they were all locating today, too. They do have a really electric bullpen like you said and I think they are going to make it pretty far next week.”

Dillard expected a closer battle on Monday after Arkansas won the first game of the series 11-2 and Ole Miss routed the Razorbacks 13-5 on Sunday.

“They got out to an early lead, had a few better swings than us, kept adding on. I have to give it to them. They didn’t just stop hitting. That is what a good offense does, when you get up, you just keep going.

“I thought today if I would have predicted it, it would have been a little bit closer, but you have to tip your cap to Arkansas. They are a really talented team and they showed that this weekend.”

“I have said it many times that there is not a conference in the country that prepares you more for postseason than the SEC,” Bianco said. “It is just 10 weeks and 30 games that weathers you, thickens your skin and humbles you. Unfortunately, that continued into the super regional.

“I don’t think there is a surprise to anybody that there is at least four teams in there and I guess three from the (SEC) West. Again, it is one of those things that for 10 straight weeks, it is just a war that you have to go through and I think it prepares you for this.”