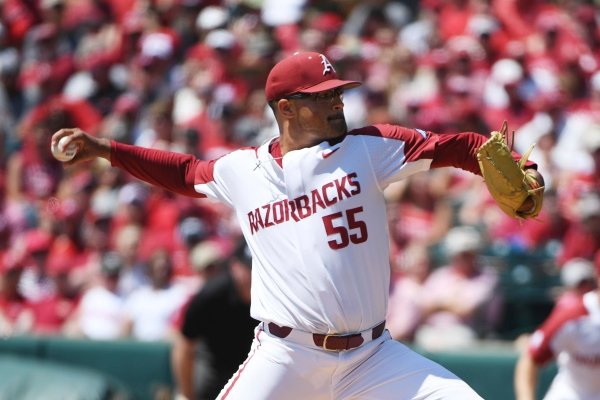 FAYETTEVILLE — There wasn't room for Arkansas pitcher Isaiah Campbell on the All-Southeastern Conference teams, but All-America voters are finding space for the junior right hander.

The recognition for Campbell comes following a dominant postseason in which he has allowed 3 earned runs and struck out 18 in 21 1/3 innings. It also comes following his selection by the Seattle Mariners in the second round of last week's MLB Draft.

After throwing five scoreless innings on a pitch count against Georgia at the SEC Tournament, Campbell has pitched deep into two NCAA Tournament games against TCU and Ole Miss.

Campbell threw a career-high 8 1/3 innings against the Rebels on Saturday. He faced 4 above the minimum, struck out 7 and allowed 2 runs - a solo home run in the first and ninth innings.

That performance followed up an 8-inning start against the Horned Frogs when Campbell allowed 1 run on 4 hits and struck out 8 batters.

Campbell was one of several great SEC starters in 2019 - seven starters were semifinalists for the Golden Spikes Award - but he did not make the all-conference team that is capped at four starters. Six SEC starters made Baseball America's three, more expansive All-America teams.

Cronin was named to the All-SEC team and is an All-American for the first time. The junior left hander has 12 saves this season and a 2.00 ERA in 27 innings. His .163 opponent batting average is the lowest on Arkansas' team.

Cronin was a fourth-round draft pick of the Washington Nationals last week.

Campbell and Cronin are the fourth set of Arkansas teammates to be named All-Americans under 17th-year Razorbacks coach Dave Van Horn. Others to achieve the honor in the same season were pitchers Nick Schmidt and Jess Todd (2007), third baseman Zack Cox and pitcher/outfielder Brett Eibner (2010), and pitcher Blaine Knight and second baseman Carson Shaddy last season.

The Razorbacks have had 26 players earn All-America honors 31 times.