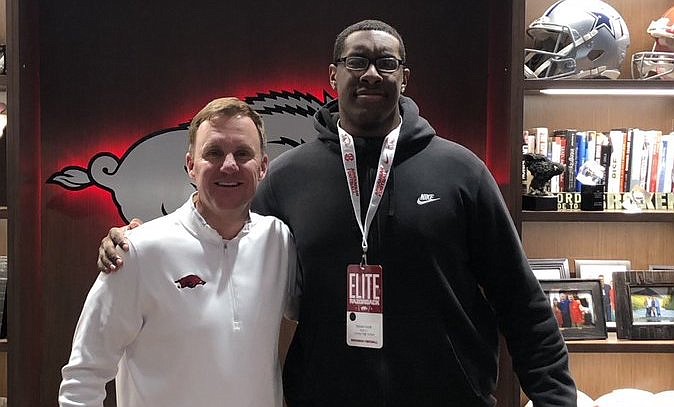 That includes a trip next weekend to Missouri as well as trips to Arkansas and other schools.

“My mom is still trying to plan everything out,” Scott said Sunday. “I think I will be at Missouri next weekend.”

Scott is one of five 2020 prospects in Arkansas who have offers from the Razorbacks. He also has offers from Mississippi State, Tennessee, Missouri, Ole Miss, Nebraska, TCU, Louisville, Kansas, SMU, Vanderbilt, Arkansas State and Louisiana Tech.

Scott is on good terms with Arkansas coach Chad Morris and Razorbacks offensive line coach Dustin Fry, both of whom have let him know he is a top priority on a recent unofficial visit.

“That was amazing,” Scott said of the visit. “All the coaches knew who I was. I got to go to the offensive line room and watch film. I love all the coaches up there. They are really cool.”

Scott has a tag-team partner in recruiting with his mom and they have visited Arkansas, Mississippi State, Missouri and Louisiana Tech unofficially so far.

“My mom is really big on academics and looks at that more than anything while I am looking at the football perspective and what a school has,” Scott said. “We view it as teamwork.

“I have to tell you that my mom looks at Cs like they are Fs. She really doesn’t let me slack up in the classroom. I think it is great that she pushes me that way. A lot of people don’t have someone that does it for them.”

Scott, who has added 40 pounds to his frame since the beginning of his junior season, plans to take all five of his official visits before making a decision.

“My mom wants me to take a good look at all the schools before I make a decision because she wants me to be sure of my decision, so when I commit there will not be any going back on it,” Scott said. “She wants me to make a strong decision and an informed one.”

Scott was honored to be tabbed as the state’s top player, a choice that has also gone to Hazen defensive end Blayne Toll (6-5, 242) and Morrilton quarterback and North Carolina commit Jacolby Criswell (6-3, 210) in other rankings.

“It is amazing, it’s a blessing and it is all due to hard work that has paid off,” Scott said. “But I could not have done it without my teammates and all my coaches pushing me every day.

“I'm so happy about the offers, but I am hoping that it leads to ones for my teammates as well. We have a lot of talented guys that have been together since pee-wee football, and I hope schools will give them looks, too.”

Scott’s ascension to top spot in the rankings comes after concentrating on basketball up until his freshman season.

“I really liked basketball and played through the ninth grade,” Scott said. “But I thought about it and there is not a lot of 6-6, 6-7 guys playing inside in college and thought I might have a better future in football. So I applied myself and it’s worked out pretty good for me.”

Scott, who helped lead Conway to a 10-3 record last season, thinks his basketball days helped him be a better football prospect.

“In basketball you have to do a lot of running and at first I was kind of clumsy because I had size 16 feet,” Scott said. “I really had to work hard on that and we did a lot of footwork drills in basketball and that helped me get to where I am now - just light on my feet.”

He did not lift weights early on, but has developed a love for them now after a talk with Wampus Cats offensive coordinator Brian Raney.

“When I first started lifting weights, I could only do like 85 pounds or something sad like that,” Scott said. “I was already a big kid, but never really had been in the weight room because I was playing basketball.

“After one of my last games as a sophomore, Coach Raney told me, ‘Robert, you think you are strong, but you are not really that strong.’ He told me you've got to fall in love with the weight room.

“I did that and now I am benching over 300 and getting stronger every day. That doesn’t just happen, so I am putting in the work to continue to get stronger this offseason.”

Conway second-year coach Keith Fimple is a fan of Scott on and off the field.

“He loves to lift and doing the type of exercises that make him better,” Fimple said. “It is special to see a guy that size with so much drive to get better. He has a great understanding of technique and fundamentals that he falls back on and stays so low.

“I think that is what is special about him. He bends extremely well, is a great 5-10-5 guy, which is a shuttle run used at combines a lot. ... He is just so light on his feet and it stands out when you see him.”

Fimple has been pleased with how Scott has taken in all the attention.

“He is a very humble individual, he doesn’t talk about it a whole bunch and it's different to see that from a kid,” Fimple said. “You just don’t see that these days in sports.

“To be honest, I think it surprised him when all the offers started rolling in and you could just see his face light up. It's pretty fun to see.”