Up first for Hogs in Omaha: Florida State 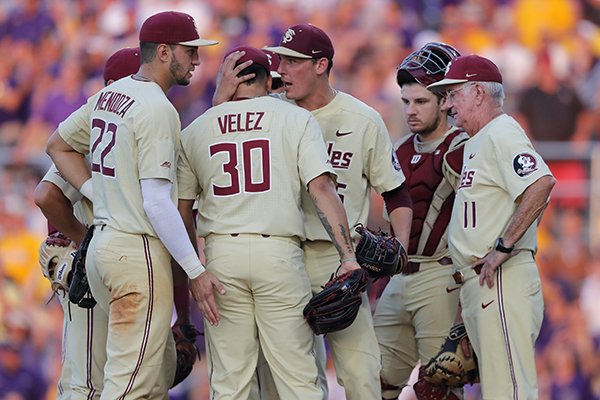 Their next game at college baseball’s grail will be against one another.

The No. 5 Razorbacks will play the Seminoles on Saturday at 6 p.m. at TD Ameritrade Park in Omaha, Neb.

Martin, 75, is in his 17th College World Series after an unlikely run by the Seminoles through a regional at Georgia and a super regional at LSU. The Seminoles (41-21) have won all five of their games this postseason, including two apiece over national seeds Georgia and LSU.

Florida State advanced to the College World Series on Sunday with a 5-4 victory over LSU. Third baseman Drew Mendoza’s two-out RBI single in the bottom of the 12th inning won the super regional for the Seminoles.

Martin is the all-time wins leader in college baseball with 2,028, but is still in search of his first national championship in his final season before retirement. The Seminoles have finished runner-up in Omaha twice, in 1986 and 1999.

Van Horn’s Razorbacks have kept Martin from two more trips to the College World Series. Arkansas defeated Florida State in super regionals in 2004 in Fayetteville and 2009 in Tallahassee, Fla.

Martin is 0-5 against Arkansas in his career, with all games coming in the postseason. In addition to the super regionals, the Razorbacks defeated Florida State 7-6 in the 1985 South II Regional in Tallahassee.

Van Horn is at the College World Series for the eighth time, including his sixth trip with Arkansas. The Razorbacks, who were national runner-up to Oregon State last season, are in Omaha in consecutive seasons for the first time.

Arkansas and Florida State will join Texas Tech and Michigan on one side of the bracket in Omaha. The winner of the double-elimination quadrant will play in the national championship series against either Vanderbilt, Mississippi State, Louisville or Auburn.

Florida State began Martin’s final season with 12 consecutive victories, but the Seminoles were just 23-20 the rest of the regular season and - along with College World Series participant Michigan - were one of the last four at-large teams admitted into the NCAA Tournament field.

The Seminoles dominated the field at the Athens Regional. FSU had victories of 13-7 over Florida Atlantic, and 12-3 and 10-1 over Georgia, the No. 4 seed in the tournament.

The Seminoles trailed LSU 4-0 in Game 1 of the Baton Rouge Super Regional before scoring the final six runs. Right fielder Reese Albert hit two home runs in the game, including a three-run homer in the seventh inning to tie the game. FSU scored a run apiece in the eighth and ninth innings.

In Game 2, FSU led 4-1 after four innings, but allowed the Tigers to tie the game with two runs in the eighth. The Seminoles worked around at least one LSU base runner in each extra inning, and won when Mendoza’s hit scored shortstop Mike Salvatore, who singled with one out and advanced into scoring position on a wild pitch.