Hogs have unfinished business in Omaha 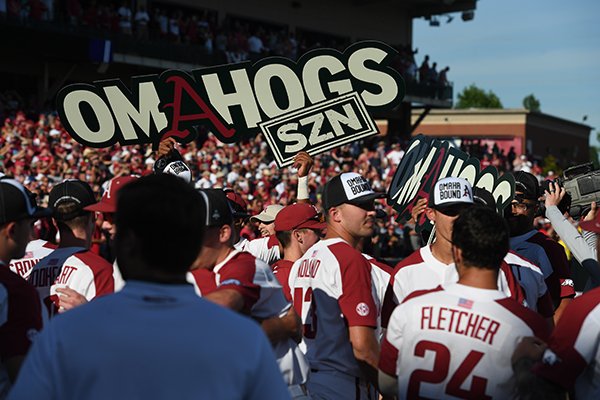 Arkansas players hold up a sign following a 14-1 victory over Ole Miss on Monday, June 10, 2019, during the NCAA Fayetteville Super Regional at Baum-Walker Stadium.

FAYETTEVILLE — As players hugged and Hog calls rang throughout Baum-Walker Stadium in the moments following Arkansas’ 14-1 victory over Ole Miss on Monday, a 1970s classic played over the stadium speakers.

Waylon Jennings’ “Omaha” is far from a baseball tune, but some of the lyrics might as well have been written to tell the story of the 2019 Razorbacks.

I got some loose ends around that I left undone

Waiting there for me in Omaha

Omaha you've been weighing heavy on my mind

I guess I never really left at all

It seems fitting that this Arkansas season will come to an end in the same ballpark as 2018. The two seasons are different, but they have felt very much intertwined.

Every step of the way, the 2019 Razorbacks have been graded against the ones of 2018. And they’ve been reminded time and again of the way last season came to an end, with the inability to close out Oregon State one out away from winning a national championship.

The replay of Carson Shaddy, Jared Gates and Eric Cole converging on a pop fly in foul ground has been replayed or retold almost every game, including during a montage to lead off the ESPN selection show for this year’s tournament. Watching from the clubhouse above the first base dugout on Memorial Day, some players booed, while others just watched without expression.

The destination for every college baseball team is TD Ameritrade Park in June, but unlike the other seven teams that will arrive later this week, there are indeed loose ends for Arkansas to tie in downtown Omaha.

“It came up from time to time,” sophomore outfielder Heston Kjerstad said Monday when asked whether last season’s disappointment played any role in this year’s success. “It left a bitter taste in our mouth, but there’s also guys on the team who have contributed to get us back to Omaha that weren’t even part of that moment and they didn’t even know what it felt like.”

For those who were on last season’s team, the experience gained likely helped with dismantling Ole Miss, a team playing in its first super regional since 2014.

Many of the Razorbacks' heroes Monday were part of last year's run, either as a contributor or as a reserve watching from the dugout. Among them: Cody Scroggins, who pitched 4 1/3 scoreless innings on a day the starting pitcher lasted only five outs; and Kjerstad and catcher Casey Opitz, who each had three hits - including a home run - and 4 RBI.

So often this time of year, the teams that have experienced how to win in the postseason are the ones that win again. Take the way Texas Tech rallied to win the final game of its super regional against Oklahoma State on Sunday, for example. The Red Raiders had a roster full of players who had been there; the Cowboys were in that position for the first time since 2016, when most of their players were still in high school.

Last year, the Razorbacks defeated South Carolina by a final score of 14-4 in Game 3 of the Fayetteville Super Regional. It was something Arkansas hitting coach Nate Thompson spoke with student assistant Jared Gates about before the game.

“We were leaving the indoor facility and we said, ‘Well, we’ve been here before,’” Thompson said. “Coach (Dave) Van Horn told the guys yesterday that it was all about who was going to play their game and play the most relaxed, and I felt like that’s what our guys did.”

Van Horn even pulled out a speech he delivered last season about pressure to win. The gist: pressure is losing your job with a mortgage and a family to feed. Game 3 of a super regional isn’t pressure, it’s fun.

Offensively, Arkansas played loose from the start. In the first inning, Casey Martin and Matt Goodheart squared up balls but hit them to deep parts of the ball park where Ole Miss outfielders were able to run underneath and make plays.

By the next inning, the Razorbacks were placing the balls where they wanted, when they wanted. Arkansas’ three RBI hits that plated four runs in the second inning all came with two strikes.

“Those were just tough, we’re not going to die at-bats,” Thompson said. “That’s the kind of style we want to play….Those were at-bats that really set the tone the rest of the day.”

Van Horn, who advanced to his eighth College World Series in the past 19 seasons, sensed the Razorbacks were going to play well before the game began. In the locker room beforehand, someone brought four big boxes of donuts and players were loose.

“I feel like they felt like we were going to win and they had been here before,” Van Horn said, “and there was no reason to get all uptight.”

The entire super regional played out almost like a mirrored image of last season’s when Arkansas had a lopsided victory in the first game and didn’t play well in the second. Last season, Arkansas outscored South Carolina 28-15 in three games; this year it outscored Ole Miss 30-16.

“It’s very eery, kind of similar to last year,” Arkansas athletics director Hunter Yurachek said. “Hopefully that all holds true except for the way it ends in Omaha this year.”

Yurachek embraced Van Horn after the game and congratulated him on another job well done - maybe a better job than last year.

“I haven’t been around him but for two years, but this has got to be one of his best all-around coaching performances when you look at how last season ended in Omaha for us, and how many pieces to the puzzle we lost,” Yurachek said. “To plug different people into different spots and…make it all work, it’s phenomenal we’re going back this year.”

Can the Razorbacks win it all this time? There are indications they could make a strong push.

Arkansas, the No. 5 overall seed in the tournament, is the second-highest seed remaining, behind Vanderbilt. In the Razorbacks’ quadrant is No. 8 seed Texas Tech, along with Florida State and Michigan, two teams that were among the last four into this year’s tournament but that have made incredible runs through regionals and super regionals away from home.

And if Arkansas can get back to the championship round, it might play another familiar opponent. Three of the four teams on the other side of the bracket are from the SEC - all of which the Razorbacks played this season and won a combined six games against.

Veteran head coaches have paraded through the media room the past two weeks singing Arkansas’ praise. TCU’s Jim Schlossnagle said “they look like a national champion” after losing twice to Arkansas last week.

“They seem to have all the parts to have a lot of success in Omaha,” Ole Miss coach Mike Bianco said of the Razorbacks on Monday.

Among those parts are the know-how to navigate the grueling two-week College World Series, and the hunger to tie up those loose ends that bind.