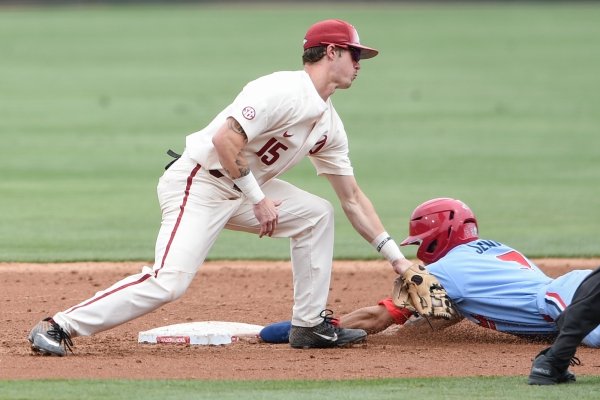 FAYETTEVILLE -- No. 5 Arkansas and No. 18 Ole Miss will meet for the eighth time this season in today's NCAA Fayetteville Super Regional finale.

It will be the most times the Razorbacks have played the same opponent in a season.

Sunday's seventh game between the SEC West rivals tied Arkansas' record for most games against the same opponent in a season. The Razorbacks played South Carolina seven times last season, including three super regional matchups, and went 5-2 in those games against the Gamecocks.

The Rebels have a 4-3 edge over the Razorbacks this season.

Arkansas starter Connor Noland lasted just one inning, his second-shortest start of the year. He allowed a three-run home run to Cole Zabowski in the first inning and a solo shot by Cooper Johnson in the second before getting the hook.

The four earned runs were more than Noland had allowed in his previous four starts, as he held LSU, Texas A&M, Ole Miss and Central Connecticut State to three earned runs in 20 innings.

Noland did not retire a batter and allowed five runs on four hits and a walk in a 12-2 loss at Vanderbilt on April 13.

Noland has allowed a team-high 11 home runs, four of them by the Rebels. Zabowski's deep shot over the right-field wall was only the second three-run home run he has allowed, joining Louisiana Tech's Mason Mallard.

Calhoun was traded by the Astros to the Phillies in 1987 for catcher Ronn Reynolds, who played on Arkansas' 1979 College World Series team.

Isaiah Campbell had hoped to pitch a complete game against Ole Miss on Saturday, but he settled for a career-long 81/3 innings and a standing ovation from the crowd in the Razorbacks' 11-2 victory.

"Just walking off for the last time on the mound at Baum, it was special," said Campbell, a redshirt junior and a second-round draft pick by the Mariners. "A lot of emotions when I was walking off that mound, just seeing the fans giving me a standing ovation.

"I'm going to miss this place and everything, but we've still got unfinished business."

Ole Miss infielders Jacob Adams and Cole Zabowski, perhaps fearful of another infield collision like they were involved in Saturday, let a Casey Martin pop fly drop between them in the base path between first and second for a first-inning single. The misplay proved costly, as Martin scored on Dominic Fletcher's two-run home run.

On Saturday, Zabowski hung on to a Martin infield fly in which he and shortstop Grae Kessinger both hit the deck, with Adams also bumping into them.

The Arkansas defense played a shaky second inning behind reliever Kole Ramage, who walked four in the inning.

Second baseman Jack Kenley misplayed a roller with a runner on first base, though the ball trickled to shortstop Casey Martin for a force out. The grounder by Jacob Adams was originally ruled a double-play ball but was overturned on replay.

Later in the inning, Martin threw home on a bases-loaded triple by Tyler Keenan when a throw to third looked like a closer play. Then Kenley could not get the ball out of his glove for a relay to first after taking a throw from third baseman Jacob Nesbit on a potential double-play ball.

The UA's marketing team has run with a remark from Arkansas second baseman Jack Kenley leading into the super regionals about playing games at 11 a.m. and 2 p.m. Kenley's response was that whenever the Razorbacks played, it was prime time.

Prior to the game Sunday, the video board announced: "The official time of day: Prime Time".

The UA women's track and field team, which won the NCAA Outdoor Championship on Saturday in Austin, Texas, was honored before the game.

The Razorbacks' athletes and coaches lined up on the Arkansas dugout and drew a standing ovation.

The 16 teams in super regionals included five from the SEC West with Arkansas, Auburn, LSU, Mississippi State and Ole Miss.

"I've been saying it all year, the Western Division is the toughest division in the country," Arkansas Coach Dave Van Horn said. "It was just such a grind to get through it. It's the SEC. That's what we signed up for."

Keith Carter, a Perryville native who starred as a basketball player for Ole Miss, was appointed the Rebels' interim athletic director on May 27 after Ross Bjork left for Texas A&M.

Carter said he hopes to keep the job, but he won't lobby for it.

"I would love to have the permanent tag," Carter said as he watched the Rebels practice in the Fowler Center.

"It would be a dream to be the AD at Ole Miss, no question. But as I've told a lot of people, I'm an old-school guy and I'm just going to come in and put my head down and work hard."

It might be a few months before Ole Miss has an athletic director in place, because it has an interim chancellor in Larry Sparks.

Five Arkansas and Ole Miss players picked in the MLB Draft last week could soon be teammates in the minor leagues.

• Arkansas center fielder Dominic Fletcher's two-run home run in the first inning was his 11th of the year, but his first since May 9 in a 14-4 victory over LSU.

• New Arkansas men's basketball Coach Eric Musselman donned a full Razorbacks baseball uniform for a photo with his players that was posted on the team's Twitter account.