One that got away: Rebels bludgeon Hogs, force decider today 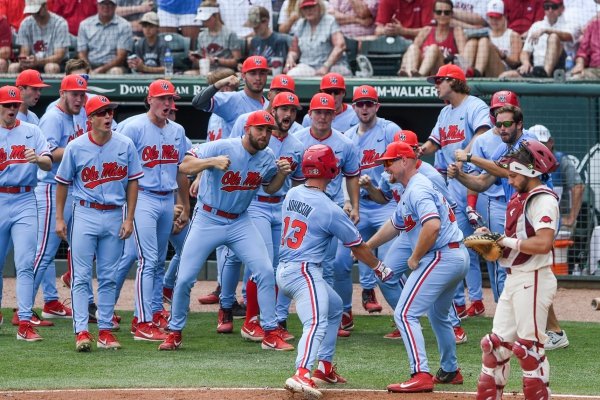 FAYETTEVILLE -- No. 18 Ole Miss flexed its power-hitting chops Sunday, smacking four home runs with the wind blowing out of Baum-Walker Stadium on its way to a 13-5 rout of No. 5 Arkansas.

"I'm proud of our guys the way they bounced back from yesterday's game, which was so one-sided," Ole Miss Coach Mike Bianco said.

The SEC West rivals will meet today at 3 p.m. (ESPN2) for the right to advance to the College World Series. The eighth meeting of the year, the most in a season against a single opponent for the Razorbacks, will match a pair of freshmen in University of Arkansas left-hander Patrick Wicklander (6-2, 4.29 ERA) and Ole Miss right-hander Gunnar Hoglund (3-2, 4.64).

The Rebels drew eight walks and got early home runs from Cole Zabowski and Cooper Johnson off starter Connor Noland (3-5), and late ones from Tyler Keenan and Grae Kessinger to post the highest run total on the Hogs since the University of Arkansas at Little Rock won 17-7 on April 2. The Rebels' four home runs were their most in a game since they hit six in a 25-0 win over the University of Arkansas-Pine Bluff on March 20.

Four walks and two potential double plays that were not turned in the second inning led to five runs for the Rebels, who led 8-2 after two innings.

"That had to do with not turning double plays, walks," Arkansas Coach Dave Van Horn said. "We walked them eight times. You can't walk them eight times. They're too good. So we got what we deserved, and they whipped us."

Zabowski went 3 for 4 with 3 RBI, while Keenan drove in 4 runs and had 2 hits along with Johnson and Anthony Servideo for the Rebels.

Arkansas tied the Rebels with 12 hits, but the Razorbacks could not bunch them together and sprinkle in walks like Ole Miss did. Matt Goodheart led the Hogs with three hits, including two doubles, while Casey Martin and Dominic Fletcher had a pair of hits each.

The Rebels drove the freshman Noland out of the game before he could post an out in the second inning, then continued the second-inning rampage against Kole Ramage.

Arkansas jumped ahead 2-0 in the top of the first against Ole Miss lefty Doug Nikhazy (9-3) on Fletcher's two-run home run, which followed an infield popup from Martin that fell for a single.

The lead did not last through the bottom of the frame.

Zabowski blasted a three-run home run deep over the right-field wall after Thomas Dillard hit a looping single that just eluded the diving Fletcher in center field and Grae Kessinger was hit by a pitch in the bottom of the first. The Rebels never trailed after Zabowski's 12th home run of the season.

"The three-run homer was a change-up, which was supposed to be down and away," Van Horn said. "It ended up being belt high down the middle, and he hammered it."

Johnson, the Ole Miss catcher, knocked Noland out of the game with an opposite-field home run, his eighth, to open the second inning and ignite a five-run frame.

The Rebels drew four walks from Ramage in the inning, and two of them came around to score.

These Rebels looked more like the team that clubbed three opponents by a combined 41-7 score in winning the NCAA Oxford Regional last weekend than the one controlled by Arkansas ace Isaiah Campbell in an 11-2 game Saturday.

Nikhazy was far from sharp, allowing 5 runs on 10 hits through his 5 innings, but he walked only 1 batter and struck out 8. The 5-10 freshman from Windermere, Fla., said he departed from a brief, playful discussion with some young Arkansas fans prior to the game by telling them what he planned to do.

"They were kind of giving me a hard time, and it was getting toward the end of BP and I said, 'All right, time to go beat some Hogs. Here we go.' "

Nikhazy got the win by pitching out of significant jams. The Razorbacks stranded seven runners against Nikhazy in his five innings.

"Just a fantastic job by him," Martin said. "He went out there and did what he was supposed to do and kind of kept us off balance a little bit."

The Razorbacks loaded the bases with one out in the third inning on Trevor Ezell's hit by pitch, Goodheart's single and Fletcher's bunt single. But Nikhazy struck out Heston Kjerstad looking in an eight-pitch at-bat, then got Jack Kenley on a popup to escape damage.

"That bunt that [Fletcher] did to get the bases loaded, it was like, 'All right, now I can go from the windup, I can get kind of into a rhythm,' " Nikhazy said. "When I had that long at-bat with Kjerstad, he's just a really good hitter, so much bat control, and he was just kind of poking everything. Eventually, we just decided to try to throw a ball a little bit off and see if he'll try to hack at it. The ball kind of cut back over on the plate and got that corner. The next guy after that, once the momentum was back on our side, then I just threw a change-up to get him to pop out."

The Razorbacks rallied for three runs in the fourth inning on consecutive doubles by Ezell, Martin and Goodheart after Jacob Nesbit's one-out single. But the Hogs could get no closer than 8-5 as right-hander Houston Roth allowed no runs on two hits over the final four innings to post his first save.