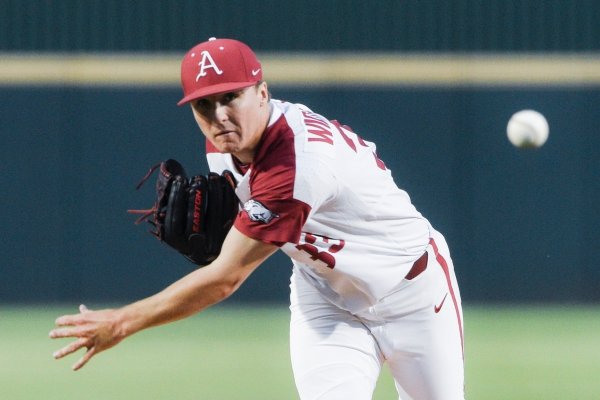 FAYETTEVILLE -- Gunnar Hoglund was Ole Miss' starting pitcher when the Rebels eliminated the University of Arkansas baseball team in the SEC Tournament with a 3-2 victory on May 24 in Hoover, Ala.

The stakes are much higher today when Hoglund, a freshman right-hander, starts against Arkansas freshman left-hander Patrick Wicklander in Game 3 of the NCAA Fayetteville Super Regional at Baum-Walker Stadium.

The winning team will advance to the College World Series.

When the Razorbacks beat TCU 6-0 on June 2 to win the Fayetteville Regional, Wicklander started and went 5 innings while holding the Horned Frogs to 3 hits and 1 walk with 7 strikeouts.

"I feel good about Patrick," Arkansas Coach Dave Van Horn said Sunday after the Rebels beat the Razorbacks 13-5 to tie the super regional 1-1. "I just think when he's on, he's one of the better young pitchers in our league."

"He's been great all year," Martin said. "We expect him to pound the zone, and we'll definitely have his back."

Hoglund (3-2, 4.64 ERA) went a season-long 61/3 innings against the Razorbacks in his SEC Tournament start and held them to 2 runs, 3 hits and 2 walks with 6 strikeouts. He went 51/3 innings in Ole Miss' regional-clinching 19-4 victory over Jacksonville State on June 2 while holding the Gamecocks to 1 earned run and 5 hits without a walk and 5 strikeouts.

"Gunnar has pitched just about every game three for us almost the whole year and really -- as you have seen in this league -- some of the freshmen get better as the year goes on, and he has certainly been that guy," Rebels Coach Mike Bianco said. "His last three or four outings, he has been terrific for us, and we feel probably like [the Razorbacks] do. Wicklander is probably similar to where he has come on at the end of the year and solidified their rotation."

Ole Miss beat Arkansas 10-5 in Hoglund's regular-season start at Baum-Walker Stadium on March 31. He went 3 innings and gave up 2 runs, 3 hits and 1 walk with 3 strikeouts.

"I don't remember him," Fletcher said. "We'll have our hitter's meeting [today] and take a look at his stuff, then get ready to go."

"I think he's become a guy that lives for these moments," Nikhazy said. "I think he's really going to rise to the occasion, and he's going to be stellar for us, give us a lot of good innings and get the win."

Hoglund was picked No. 36 overall by the Pittsburgh Pirates in last year's draft, but he turned them down to play for the Rebels.

"He's a young man that a lot of people didn't think he'd make it to college," Van Horn said. "They thought he'd sign a professional contract.

"When he's on, he's like Wicklander. He can be as good as any freshman in the SEC."

If either freshman starter struggles early, Van Horn and Bianco have fresh relievers ready to go.

Arkansas has yet to use closer Matt Cronin, Jacob Kostyshock or Cody Scroggins -- who were all drafted last week -- along with Zebulon Vermillion.

"I feel good about who we have in the bullpen," Van Horn said. "We've got most everybody left, as does Ole Miss."

Houston Roth pitched the final four innings for the Rebels on Sunday, but they haven't used closer Parker Caracci, Austin Miller and Ryan Olenek -- their center fielder who has two saves despite pitching just six innings -- or Zack Phillips.

Tyler Myers, who pitched two innings in Arkansas' 11-2 victory Saturday, also figures to be available for the Rebels.

"They have a bunch of guys who haven't pitched yet over there, either," Bianco said. "So it should make for a really good game."