Van Horn: 2019 among most gratifying seasons of career 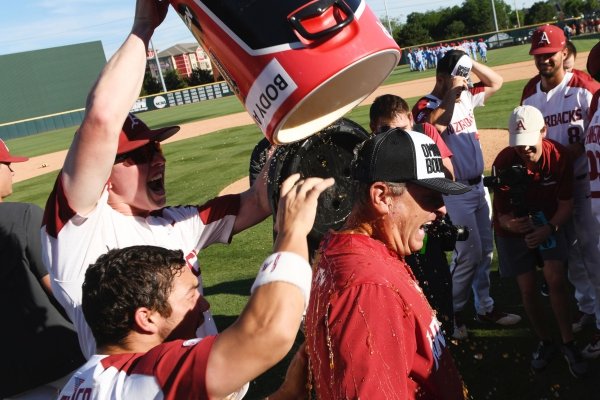 FAYETTEVILLE — Arkansas catcher Casey Opitz was in mid-sentence speaking to reporters on the field at Baum-Walker Stadium on Monday when he realized he needed to step away and join the Razorbacks' team meeting on the infield grass.

"I've got to go listen to the boss," he said as he jogged - OmaHogs sign in hand - toward the scrum of Arkansas players surrounding Dave Van Horn.

Van Horn's chat hardly lasted more than 30 seconds. The message, though, was real.

"This has been one of the most gratifying seasons I've ever had as a coach," said Van Horn, who's in his 25th season as a coach at the Division I level. "And you know what? We're going to Omaha, baby!"

Thanks to Arkansas' 14-1 rout of Ole Miss in Game 3 of the Fayetteville Super Regional, Van Horn, including his time at Nebraska, will be making his eighth trip to the College World Series. As a program, the Razorbacks are in Omaha in consecutive seasons for the first time.

Earning the opportunity to play in mid-to-late June once every few seasons is an accomplishment in itself, but to do it again this year with a number of players who were either not with the team or non-factors in 2018 is special.

Take third baseman Jacob Nesbit, for example. Nesbit did not travel with Arkansas to Omaha last season. Instead, he grew up mentally and physically playing in North Dakota in the Northwoods League.

Monday, the redshirt freshman hit an RBI double in the Razorbacks' four-run second inning and made arguably the defensive play of the game diving to his right to take away a sure double from Ole Miss left fielder Thomas Dillard. Nesbit bounced up and fired to first, securing the game's final out.

"What a thrill for me as coach to be a part of this and to watch these guys celebrate, and the joy," Van Horn said. "It’s like I told them at the beginning: the pressure for me is during the season. This is fun for me. I love Omaha. I love going to Omaha.

"But I really, really, truly mean it when I say I want them to get there and I just kind of want to go with them. It was just an incredible, incredible ride, a journey or whatever you want to call it this season."

The old cliche in sports is 'There is no I in team.' These Razorbacks, shortstop Casey Martin said, truly latch on to that mantra, and it's carried them to this point.

"Our team was great last year, but the way these guys compete for each other, it’s not just a me thing. It’s a team thing," he added. "This team is just something different. We’re ready to go all the way."

Right fielder Heston Kjerstad, who broke out of a 4-for-27 funk against Ole Miss entering Monday with a three-hit, four-RBI day, spoke to Arkansas' closeness, which sets it apart perhaps from past teams.

"It means a lot to be a part of a great team like this. It’s a great group of guys and they just want to get in and work hard," said Kjerstad, whose 396-foot home run put Arkansas up 9-1 in the fifth inning. "We all want to win, but we want to do it together.

"As you saw this whole season, when someone isn’t at their best or someone is at their best they’re either helping the team out or picking up the guy in front of him that didn’t get it done. That’s what a team is, day in and day out."

This trip to the College World Series, however, is a little sweeter for Van Horn given his team, which lost six starting position players and its top two weekend arms from 2018, was picked to finish in the middle of the pack in the SEC West. He didn't take it as a slap in the face or a sign of disrespect, though.

And he himself didn't believe the Razorbacks would be ranked in the top 20 prior to the season. But they were.

"I thought maybe (voters) were doing that just because we finished really good last year, but we backed it up a little bit," Van Horn said. "Just really proud of this team. It's been fun.

"I'm glad we're still playing and get to hang out together for another couple of weeks."