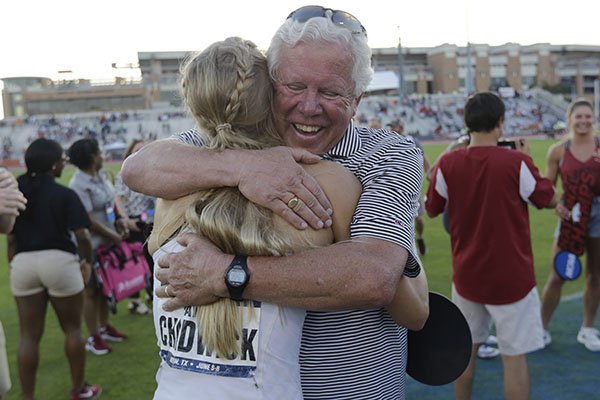 FAYETTEVILLE -- The University of Arkansas women's cross country team finished No. 2 nationally three consecutive years from 1991-93 and third in 1994 early in Lance Harter's tenure as coach.

After the Razorbacks joined the SEC in 1991, they won cross country conference titles in 10 of the next 12 years.

But Harter -- who has coached the UA women's cross country and track and field teams since the fall of 1990 -- didn't enjoy widespread recognition despite the Razorbacks' SEC championships and high national finishes.

"I started using the line that a lot of people are surprised at how tanned I am considering I've been in the shadow of John McDonnell forever," Harter said. "I never got a chance to see the sun much."

After Harter won 13 NCAA Division II titles in cross country and track and field at Cal Poly San Luis-Obispo from 1982-90, he came to Arkansas when McDonnell was at the height of his career as the Razorbacks' men's coach.

McDonnell led the Razorbacks to an NCAA-record 40 national championships in cross country and indoor track and field, as well as 84 Southwest Conference and SEC titles from 1972-2008.

"John was always very gracious and supportive of the women's program, but he really created a monster with his program and worked his tail off to keep feeding it," Harter said. "So even when we were getting second or third nationally and bringing home a trophy and winning SEC titles, it kind of went unnoticed because of the dominance John had created."

Harter now has created a monster of his own.

Over the past six school years, the UA women's team has won 16 of 18 SEC meets in cross country and indoor and outdoor track, including a sweep this year.

The Razorbacks capped off the 2018-19 school year over the weekend in Austin, Texas, by winning the NCAA Outdoor championship for their fourth national title in five years. They also won outdoors in 2016 and indoors in 2015 and this year.

"I am definitely getting tanned to the point that I probably need to double up on sunscreen," Harter said with a laugh. "And make sure I wear a hat as often as possible."

Arkansas won its latest national championship 64-57 over USC when the meet went down to the final event -- the 1,600-meter relay -- with the Razorbacks and Trojans tied 56-56.

The Razorbacks took second in the relay with a team of freshman Paris Peoples, seniors Kiara Parker and Payton Chadwick, and sophomore Kethlin Campbell running 3:25.89. USC dropped the baton on the third leg and finished eighth.

"That will always be the question -- what would have happened if USC hadn't dropped the baton?" Harter said. "Unfortunately, when you're in a pack like that, you can get tangled up and all of a sudden the baton's laying there on the inside of the track and everybody goes whizzing by."

Harter said he believes the Razorbacks would have beaten USC even if the Trojans hadn't dropped the baton because of the way Chadwick was moving up on her third leg and the anchoring speed of Campbell, the SEC 400 champion who finished fourth at the NCAA meet.

"You run out of adjectives to describe Janeek," Harter said. "To be so young and basically be world class, it's just a tribute to her work ethic."

Redshirt sophomore Taylor Werner pulled Arkansas into a tie with her second-place finish in the 5,000 in 15:52.24 after taking fourth in the 10,000 on Thursday night.

"Taylor grabbing second in the 5,000 was beyond expectations because I thought the 10,000 had taken so much out of her, and on Saturday it was a boiling 98 degrees -- and 115 on the track -- and the humidity factor was exceptionally high," Harter said. "But Taylor has such grit. Using the term 'tough' for her is probably an understatement.

"The heat kept people from being too aggressive early in the race, and the longer she stays in a race, the more lethal she is, because she has such a great finish."

It was a crucial 10 points because Hoggard's twin sister, four-time NCAA champion Lexi Jacobus, was battling an Achilles tendon injury and finished ninth.

"Tori was so clutch," Harter said. "She came through with her personal-best when we needed it the most."

Parker took fifth in the 100 and ran on both relays; junior Devin Clark took seventh in the 3,000 steeplechase; and Chadwick took eighth in the 100 hurdles and ran both relays despite injuring her heel in practice.

"They were so devoted to each other as teammates," Harter said. "They weren't going to let each other down."

When Harter, 69, was interviewed by ESPN after the meet, he made sure to mention assistant coaches Bryan Compton (field events) and Chris Johnson (sprints).

"It's very sincere," Harter said. "I know I'm really blessed to have them. I appreciate the administration allowing us to keep those guys with competitive salaries."

Arkansas Athletic Director Hunter Yurachek, who was hired in December 2017, said he's been impressed by Harter and his staff.

"Lance has put together a great staff with Chris Johnson and Bryan Compton and they've built a great program and been able to sustain success," Yurachek said. "There's a culture now where there's an expectation we're going to compete for conference and national championships every year."

Harter, 69, received a new five-year contract from Yurchek last year that will go through 2023.

"Hunter has been very generous offering me a long-term contract," Harter said. "I plan on continuing to coach for a long time. I have my health and I'm super excited."