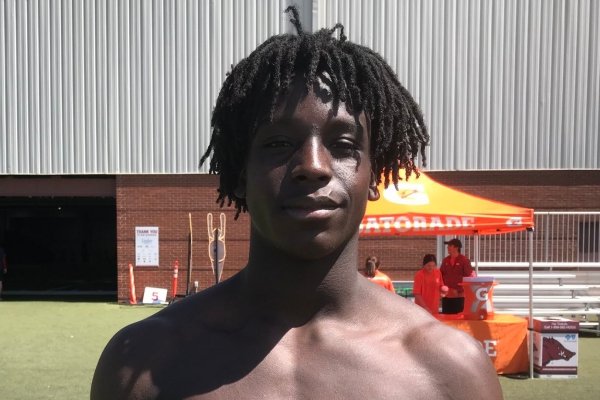 FAYETTEVILLE — Outside linebacker/defensive end Sam Cook is learning from the Arkansas coaching staff while also impressing them.

Cook, 6-4, 193 pounds, 4.7 seconds in the 40-yard dash, of Neosho, Missouri, has caught the attention of Razorbacks coaches during the two-day high school camp that ends today.

He has an offer from Evangel while drawing interest from Missouri State, Tulsa, Northern Iowa and others. He knows he has to add more weight to get looks from schools like Arkansas.

“A lot of them are saying I need to put on some weight because they’re looking at me at D-end,” Cook said. “I’m happy to put on weight. I’ll do what I need to do to win games.”

He was seen talking to several Arkansas coaches after a break of today's first session and was expected to take a tour of the football complex. Cook, who has a 3.9 grade point average, has scored a 26 on the ACT.

“I took it again last weekend, but I haven’t received the score on that one,” Cook said. “I’m hoping for a little bit better. I’m interested in math and science.”

He had 88 tackles, 5 sacks and an interception as a junior. Cook has been a learning sponge while attending camps like Arkansas.

“I got to learn how Arkansas runs their defense and how the linebackers play, what kind of coverage they run,” Cook said. “I learn stuff I can put into my own game. Every camp you go to you can pick up a couple of new little things that you like and put into your own game so you can be the best and you can win games. That’s what I’m about.”

With Fayetteville a little more than an hour away from his hometown, Cook is highly interested in the Razorbacks.